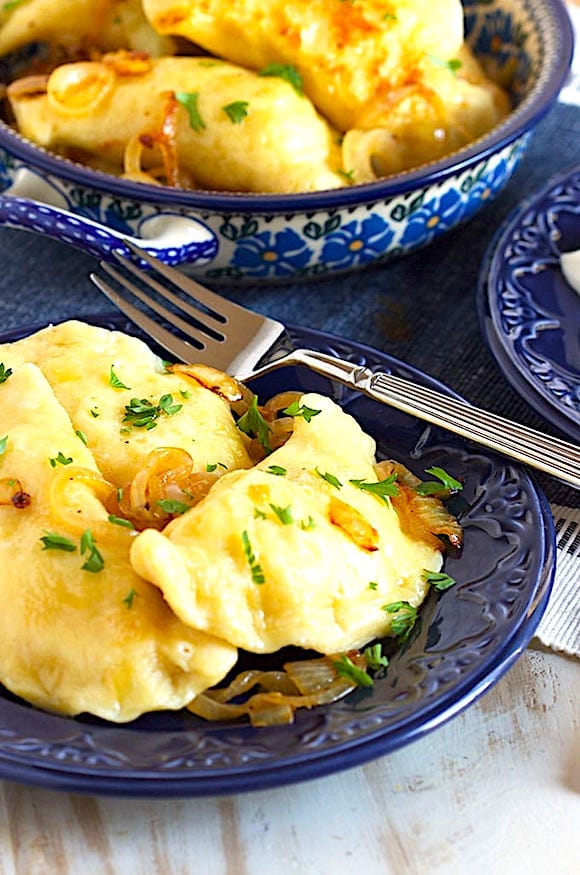 Citizens, few things are as satisfying to your beloved TFD as a toothsome pierogi, made the proper way as they do in so many homes and restaurants across Europe and America! 🙂

Pierogi, if you are unfamiliar with them, are filled dumplings of Central and Eastern European origin. Although the word pierogi is plural, most English speakers use it as if it were singular and add s or es for plural. They are made by wrapping unleavened dough around a savory or sweet filling and cooking them in boiling water. These dumplings are popular in Slavic (Belarusian, Polish, Slovak, Russian, Ruthenian, Ukrainian); Baltic (Latvian, Lithuanian); and other Eastern European cuisines (such as Hungarian and Romanian), where they are known under local names. Pierogi are especially associated with Poland and Slovakia, where they are considered national dishes.

Typical fillings include potato, sauerkraut, ground meat, cheese, and fruit. The dumplings may be served with a topping, such as melted butter, sour cream, or fried onion, or combinations of those ingredients.

The English word “pierogi” comes from Polish pierogi [pʲɛˈrɔgʲi], which is the plural form of pieróg, a generic term for filled dumplings. It derives from Old East Slavic пиръ (pirŭ) and further from Proto-Slavic *pirъ, “feast”. While dumplings as such are found throughout Eurasia, the specific name pierogi, with its Proto-Slavic root and its cognates in the West and East Slavic languages, including Russian пирог (pirog, “pie”) and пирожки (pirozhki, “baked pastries”), shows the name’s common Slavic origins, antedating the modern nation states and their standardized languages. In most of these languages, the word means “pie”.

For this particular recipe, I am focusing on Ruthenian pierogi – as noted on the excellent website thespruce.com:

The filing I have selected is for potato-cheese pierogi or pierogi ruskie is from chef Marek (Mark) Widomski, founder and director of the Culinary Institute in Cracow, Poland.

Pierogi ruskie are among the most popular types of Polish dumplings. Contrary to what most people believe, that does not translate to “Russian pierogi.” It actually means Ruthenian or Rusyn pierogi.

Ruthenians or Rusyns are also known as Carpatho-Rusyns and consist of the peoples around the northern Carpathian Mountains in western Ukraine, eastern Slovakia, and southern Poland. This area also is known as Galicia in English (Galicja in Polish, Halic in Slovak and Halchyna in Ukrainian).

Rusyns, also known as Ruthenes (Rusyn: Русины Rusynŷ; also sometimes referred to as Руснакы Rusnakŷ – Rusnaks), are a primarily diasporic ethnic group who speak an East Slavic language known as Rusyn. The Rusyns descend from Ruthenian peoples who did not adopt the use of the ethnonym “Ukrainian” in the early 20th century. As residents of Carpathian Mountains region, Rusyns are also sometimes associated with Slovak highlander community of Gorals (literally, “Highlanders”).

My version is traditional, but adopts a dough commonly used by Polish-Americans in their version of this classic and that heretically includes some onion juice for extra flavor (this is common in Lithuanian pierogi but is not normally done in the Polish version) – it also includes sour cream for tenderness, while the filling is classic Polish. The garnish is where I innovated, using chopped parsley and minced celery leaves.