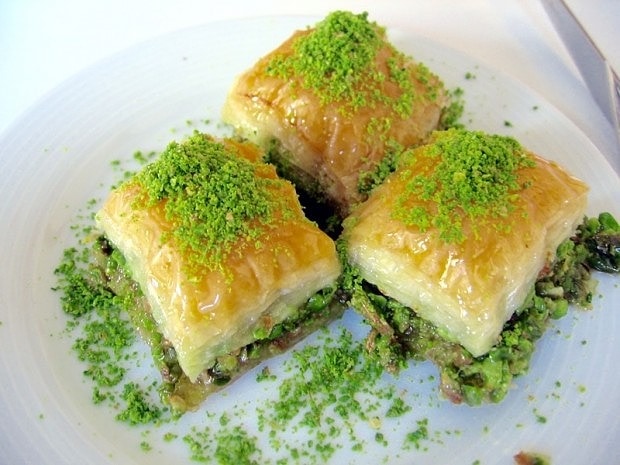 Baklava – the dessert of the Mediterranean! 🙂

A hallmark of Greek cuisine, variants of baklava are found in virtually all the countries of the Levant (aka The Middle East).

Baklava (Arabic: بقلاوة‎) is a rich, sweet dessert pastry made of layers of filo filled with chopped nuts and sweetened and held together with syrup or honey. It is characteristic of the cuisines of the Levant and the broader Middle East, along with Greece, the South Caucasus, Balkans, Maghreb, and Central Asia.

The word baklava is first attested in English in 1650, a borrowing from Ottoman Turkish باقلاوه /bɑːklɑvɑː/. The name baklava is used in many languages with minor phonetic and spelling variations. Historian Paul D. Buell argues that the word “baklava” may come from the Mongolian root baγla- ‘to tie, wrap up, pile up’ composed with the Turkic verbal ending -v; baγla- itself in Mongolian is a Turkic loanword.

Linguist Sevan Nişanyan considers its oldest known forms (pre-1500) to be baklağı and baklağu, and labels it as being of Proto-Turkic origin. Another form of the word is also recorded in Persian, باقلبا (bāqlabā). Though the suffix -vā might suggest a Persian origin, the baqla- part does not appear to be Persian and remains of unknown origin.

Although the history of baklava is not well documented, its current form was probably developed in the imperial kitchens of the Topkapı Palace in Istanbul. The Sultan presented trays of baklava to the Janissaries every 15th of the month of Ramadan in a ceremonial procession called the Baklava Alayı.

There are three proposals for the pre-Ottoman roots of baklava: the Roman placenta cake, as developed through Byzantine cuisine, the Central Asian Turkic tradition of layered breads, or the Persian lauzinaq.

The oldest (2nd century BCE) recipe that resembles a similar dessert is the honey covered baked layered-dough dessert placenta of Roman times, which Patrick Faas identifies as the origin of baklava: “The Greeks and the Turks still argue over which dishes were originally Greek and which Turkish.

Baklava, for example, is claimed by both countries. Greek and Turkish cuisine both built upon the cookery of the Byzantine Empire, which was a continuation of the cooking of the Roman Empire. Roman cuisine had borrowed a great deal from the ancient Greeks, but placenta (and hence baklava) had a Latin, not a Greek, origin—please note that the conservative, anti-Greek Cato left us this recipe:

Andrew Dalby identifies this, and surrounding dessert recipes in Cato, as coming from a “Greek tradition” and cites Antiphanes (fl. 3rd century BC) as quoted by Athenaeus. Several sources state that this Roman dessert continued to evolve during the Byzantine (Eastern Roman) Empire into modern baklava.

In antiquity the Greek word plakous (Greek: πλακοῦς) was also used for Latin placenta, and the American scholar Speros Vryonis describes one type of plakous, koptoplakous (Byzantine Greek: κοπτοπλακοῦς), as a “Byzantine favorite” and “the same as the Turkish baklava”, as do other writers.

Indeed, the Roman word placenta (Greek: πλατσέντα) is used today on the island of Lesbos in Greece to describe a baklava-type dessert of layered pastry leaves containing crushed nuts that is baked and then covered in honey.

Muhammad bin Hasan al-Baghdadi was a compiler from the Abbasid period who described lauzinaq, a dessert said by some to have been similar to baklava, though others say it was not like baklava.

Lauzinaq, which derives from the Aramaic word for almond, refers to small pieces of almond paste wrapped in very thin pastry (“as thin as grasshoppers’ wings”) and drenched in syrup.

Al-Baghdadi’s cookbook, Kitab al-Tabikh, was written in 1226 (in today’s Iraq) and was based on a collection of 9th century Persian-inspired recipes. According to Gil Marks, Middle Eastern pastry makers developed the process of layering the ingredients; he asserts that “some scholars said they were influenced by Mongols or Turks”.

The only original manuscript of al-Baghdadi’s book survives at the Süleymaniye Library in Istanbul (Turkey) and according to Charles Perry, “for centuries, it had been the favorite cookbook of the Turks,” though Perry also notes that the manuscript has no recipe for baklava.

A further 260 recipes had been added to the original by Turkish compilers at an unknown date retitling it as Kitâbü’l-Vasfi’l-Et‘ime el-Mu‘tâde, and two of its known three copies can be found now at the Topkapı Palace Library in Istanbul. Eventually, Muhammad ibn Mahmud al-Shirwani, the physician of the Ottoman Sultan Murad II prepared a Turkish translation of the book, adding around 70 contemporary recipes.[citation needed]

Another recipe for a similar dessert is güllaç, a dessert found in the Turkish cuisine and considered by some as the origin of baklava. It consists of layers of filo dough that are put one by one in warmed up milk with sugar. It is served with walnut and fresh pomegranate and generally eaten during Ramadan.

The first known documentation of güllaç is attested in a food and health manual, written in 1330 that documents Mongol foods called Yinshan Zhengyao (飮膳正要, Important Principles of Food and Drink), written by Hu Sihui, an ethnic Mongol court dietitian of the Yuan dynasty. Uzbek cuisine has pakhlava, puskal or yupka or in Tatar yoka, which are sweet and salty savories (börekler) prepared with 10–12 layers of dough.

There are also some similarities between baklava and the Ancient Greek desserts gastris (γάστρις), kopte sesamis (κοπτὴ σησαμίς), and kopton (κοπτόν) found in book XIV of the Deipnosophistae. However, the recipe there is for a filling of nuts and honey, with a top and bottom layer of honey and ground sesame similar to modern pasteli or halva, and no dough, certainly not a flaky dough.

My version of this magnificent dish incorporates mostly pistachio with some walnut for additional flavor.

The sultry syrup I’ve created for this uses rose and orange waters in a nod to the Levant and Apricot juice as a salute to Turkey, which grows the best apricots in the world! Typically, a baklava syrup is just sugar and water or occasionally honey and water.

The sugar flavoring the nut mixture has several spices to excite your palate as well.

Basically, this is the best baklava you’ll ever eat or serve – I guarantee it. 🙂

Add
525shares
TFD uses cookies and we comply with GDPR so you control your personal info! If you continue on, we will assume you are happy with this, Citizen! OkNoRead more