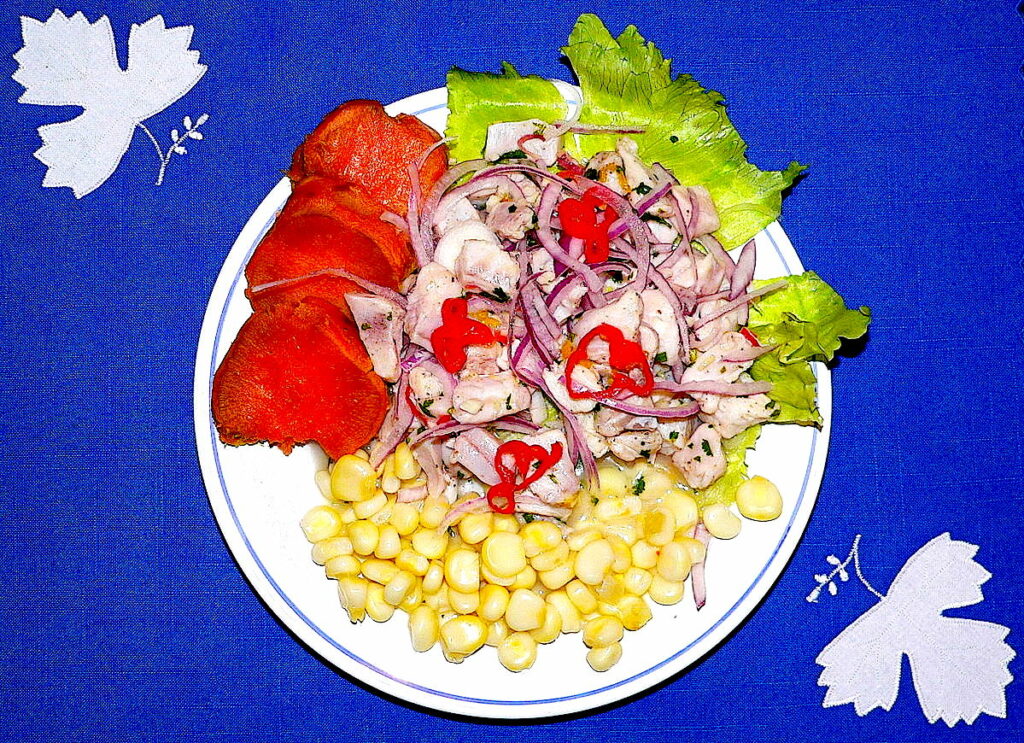 Citizens, Ceviche, the delicious Latin-American dish of fish “cooked” in citrus juices with onion, hot pepper and cilantro, has become a fairly common restaurant menu item. Usually, we see the Mexican version of this dish here in the US – but there are other variations from deep in South America that have their own unique interpretations.

Ceviche is a seafood dish originating in Peru, typically made from fresh raw fish cured in citrus juices, such as lemon or lime, and spiced with ají, chili peppers or other seasonings including chopped onions, salt and coriander. Because the dish is not cooked with heat, it must be prepared and consumed fresh to minimize the risk of food poisoning.

Ceviche is usually accompanied by side dishes that complement its flavors, such as sweet potato, lettuce, corn, avocado or cooking banana. The dish is popular in the Pacific coastal regions of Latin America. Though the origin of ceviche is hotly debated, in Peru it is considered a national dish.

Though archeological records suggest that something resembling ceviche may have been consumed in Peru nearly two thousand years ago, some historians believe the predecessor to the dish was brought to Peru by Moorish women from Granada, who accompanied the Spanish conquistadors and colonizers, and this dish eventually evolved into what is now considered ceviche.

Peruvian chef Gastón Acurio further explains that the dominant position Lima held through four centuries as the capital of the Viceroyalty of Peru allowed for popular dishes such as ceviche to be brought to other Spanish colonies in the region, and in time they became a part of local cuisine by incorporating regional flavors and styles.

Ceviche is now a popular international dish prepared in a variety of ways throughout the Americas, reaching the United States in the 1980s. The greatest variety of ceviches are found in Ecuador, Colombia, Chile and Peru; but other distinctly unique styles can also be found in coastal Honduras, El Salvador, Belize, Guatemala, the United States, Mexico, Panama, and several other nations.

This recipe is from Peru and combines corn, sweet potatoes, purple potatoes and hot peppers (Peru is the ancestral home of all these ingredients!) with the traditional ocean fish that are found sparkling fresh in the stores of Lima, the capital city. The Food Dictator always approves of authentic recipes with a unique interpretation for today’s palates – this recipe most definitely qualifies!

It’s a different ceviche than what you are used to and can easily serve as a main course – my recipe has its charms and rewards, so do give it a try, citizens! 🙂