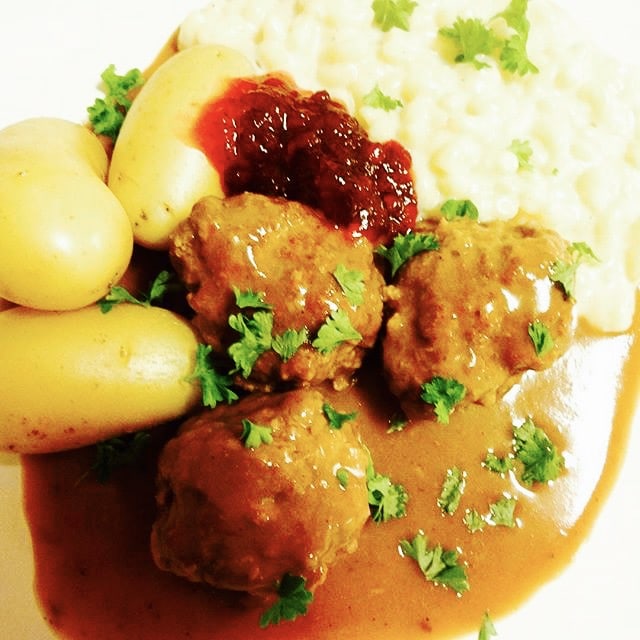 Citizens, your beloved peripatetic (in both definitions of the word) leader has just returned from a trade show in Las Vegas with a number of Norwegian friends, and this recipe is for them! 🙂

In Norway, meatballs are called kjøttboller (lit. “meatbuns”). The influence from Swedish meatballs is such that they are even often referred to as “köttbullar” (which is the Swedish-language term), though usually jokingly (Norwegians aren’t typically overly fond of Swedes, due to their turbulent history) or because the meatballs were actually purchased in Sweden, which is common in areas close to the Swedish border.

When Charles XII of Sweden was in exile in Istanbul in the early 18th century, he took the recipe for “Swedish” meatballs back to Sweden. Meatballs come in a few different types, all typically small, and the international influence is great, perhaps the greatest influences from Sweden and Spain.

They are usually eaten with potatoes or pasta, or both. Some common additions are various vegetables, ketchup, various spices, etc. “Kjøttkaker” (lit. “meatcakes”) is a much larger and different related dish, and is perhaps more traditional and also common, which is much larger in size and made of different things in a different way (and the two should not be confused).

Kjøttkaker are often served with potatoes and peas (either could be mashed). Kjøttboller is typically fried, a process which takes only very few minutes because of their size, whereas kjøttkaker are typically part of a mix which includes a brown sauce and often potatoes.

This is a classic Christmas dish in Norway, and I have adjusted the recipe to my satisfaction and with one highly eccentric ingredient that you can easily leave out (it’s available from Etsy here). My version of the gravy includes both dark beer and some delicious Norwegian gjetost cheese (easily found in most supermarkets) to help thicken and flavor the gravy.