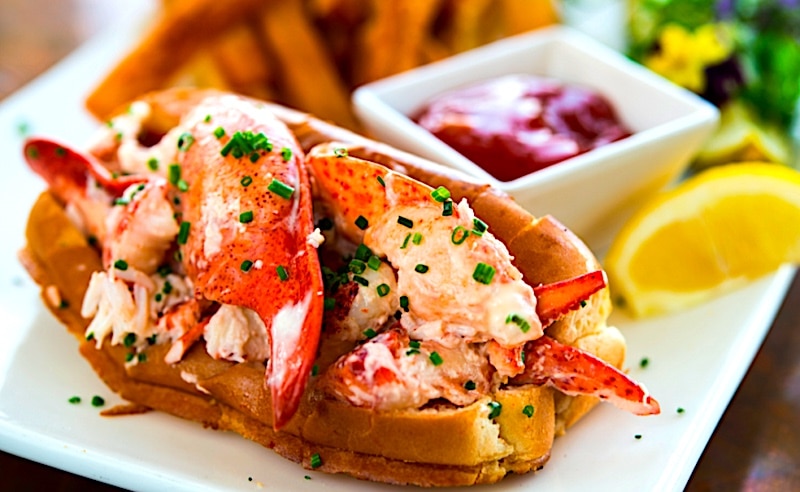 Citizens, my teenage years were spent in the maritime state of Connecticut – the original home of that most delicious of all Summer sandwiches, the lobster roll! Taking the 2 hour trip to Mystic, CT and getting a lobster roll on the shore was the highlight of many of my Summers and going to college in MA, I became further indoctrinated into the cult of the “lobstah roll”!

A traditional lobster roll is a sandwich filled with lobster meat soaked in butter and served on a steamed hot dog bun or similar roll, so that the opening is on the top rather than on the side. There are variations of this sandwich made in other parts of New England, which may contain diced celery or scallion, and mayonnaise. The sandwich may also contain lettuce, lemon juice, salt and black pepper.

Traditional New England restaurants serve lobster rolls with potato chips or french fries on the side. The lobster roll was originated at a restaurant named Perry’s, in Milford, Connecticut, as early as 1929 according to John Mariani’s “Encyclopedia of American Food and Drink.”

Once Perry’s put the new sandwich on its menu, its popularity spread up and down the Connecticut coast, but not far beyond. For those residing in Connecticut, a lobster roll served warm is simply called a “lobster roll” while the lobster roll served cold is called a “lobster salad roll”. The lobster salad roll took off on the Eastern End of Long Island, New York, starting in 1965, pioneered by the Lobster Roll Restaurant The Lobster Roll.

As far back as 1970, chopped lobster meat heated in drawn butter was served on a hot dog bun at road side stands such as Red’s Eats in Maine. Lobster rolls in the U.S. are associated with the state of Maine, but are also commonly available at seafood restaurants in the other New England states and on Eastern Long Island, where lobster fishing is common.

Lobster rolls prepared in Maine generally have several common characteristics: first, the roll itself is a “New England” or “Frankfurter” roll that is baked slightly differently from a standard hot dog roll, so the sides are flat and can be buttered on the outside and lightly grilled or toasted, and is split on the top instead of the side.

Second, the lobster meat in the roll is usually served cold, rather than warm or hot; third, there can be a very light spread of mayonnaise inside the bun or tossed with the meat before filling the roll, though usually do not have any other ingredients typical of the “lobster salad” variation in other parts of New England. The lobster meat is usually knuckle, claw, and tail meat chunks, with 4oz of meat (“¼ pound”) the common advertised serving size.

They are also a staple summer meal throughout the Maritime provinces in Canada, particularly Nova Scotia where they may also appear on hamburger buns, baguettes, or other types of bread rolls — even pita pockets. The traditional sides are potato chips and dill pickles.

McDonald’s restaurants in Canadian provinces, such as Nova Scotia and Ontario, offer lobster rolls as a limited edition item. Solely in Canada, McDonald’s called the lobster rolls McLobsters and in New England, where they are now served, they are simply called Lobster Rolls.

My version of the Maine-style lobster roll draws on all these influences – my innovation is to specify female lobsters.

Your fishmonger can tell the difference and now so can you – look at the bottom on the tail of the beast: if the top set of swimmerets are soft, translucent and crossed at the tips, you have a female. A male’s swimmerets are bony, opaque and point up toward his body.

You want a female so that you can take out their delicious roe (the coral) and mix it into the mayo for an additional hit of lobster flavor and scarlet color (my innovation here!)!

I also like a touch of esplette pepper instead of the standard paprika and some chopped celery leaves in with the lobster meat. I also lightly butter-poach the beasts for tender and succulent results and use that same lobster butter on the sandwiches!

4 toasted rectangular hot dog buns – these are damned near impossible to find outside of New England or maritime Atlantic Canada, so I recommend making your own!

A great recipe for hot dog bun dough is here.

Take raw lobster meat removed from shell, poach in 2 ½ quarts of lightly boiling water for 15 minutes, reserve coral (roe) from tail meat for use in mayo.

Bring the butter to medium heat, add the lobster and poach a second time for about 60 to 90 seconds. With a slotted spoon, scoop the lobster into a mixing bowl and set aside. Reserve poaching butter for garnishing lobster rolls.

Cut or tear the lobster into bite-size chunks and place in a bowl but leave one claw from each lobster intact. De-string the celery and then dice into small cubes.

In a medium bowl, whisk together the egg yolk, lemon juice, mustard, salt. Whisking constantly, VERY slowly drizzle the oil until mayonnaise is thick and all the oil is incorporated. Gently fold in lobster coral and carefully mix into mayonnaise. If mayo is too thick, whisk in a bit of cold water.

Stir in just enough mayonnaise to coat the lobster mixture. Mince the celery leaves and add chives to taste and stir into lobster.

Butter the buns lightly on both sides and lightly brown in a skillet or on a griddle in butter. Otherwise, lightly toast them on both sides under a broiler. Into each bun, place some lettuce leaves. Make a canoe shape with the leaves when you place them into the buns, so that the lobster meat filling stays inside better.

On top of the lettuce, spoon some of the lobster meat filling. If you have any intact claw meat, make the sandwiches attractive by tucking whole claw meat into each bun. Drizzle lobster poaching butter over each sandwich, dust with paprika or esplette pepper and flaky sea salt.

Serve with lemon wedges and potato chips dusted with Old Bay Seasoning and an ice-cold beer.