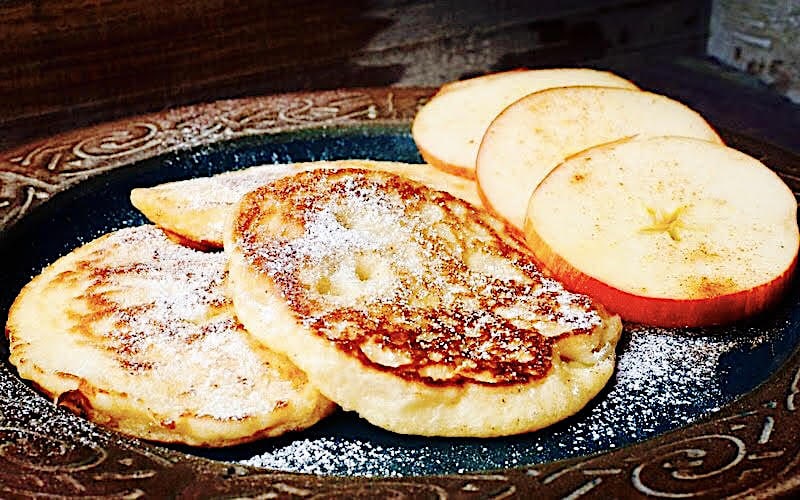 Citizens, the humble apple pancake is a favorite not just in the United States but all throughout Northern Europe as well!

While many consider the German version of this fruity delight to be the ultimate – I, TFD, your beloved incarnation of all culinary wisdom urges you to instead sample the wondrous version made in the Baltic country of Latvia!

It’s true these are two different beasts – the German version is made in a frying pan and is more of a popover with apples, while the Latvian version is a true pancake. Both rule, both are delicious and I will not engage in holy wars as to which is better. I merely encourage you, .

By the time Otzi the Iceman set off on his final hike 5,300 years ago, pancakes—or at least something pancake-like—seem to have been a common item of diet. Otzi, whose remains were discovered in a rocky gully in the Italian Alps in 1991, provided us with a wealth of information about what a denizen of the Neolithic ate. His last meals—along with red deer and ibex—featured ground einkorn wheat. The bits of charcoal he consumed along with it suggest that it was in the form of a pancake, cooked over an open fire.

Whatever the age of the primal pancake, it’s clearly an ancient form of food, as evidenced by its ubiquity in cultural traditions across the globe. The ancient Greeks and Romans ate pancakes, sweetened with honey; the Elizabethans ate them flavored with spices, rosewater, sherry, and apples. They were traditionally eaten in quantity on Shrove Tuesday or Pancake Day, a day of feasting and partying before the beginning of Lent.  Pancakes were a good way to use up stores of about-to-be-forbidden perishables like eggs, milk, and butter, and a yummy last hurrah before the upcoming grim period of church-mandated fast.

In the American colonies, pancakes—known as hoe cakes, johnnycakes, or flapjacks—were made with buckwheat or cornmeal. Amelia Simmons’s American Cookery—thought to be the first all-American cookbook, published in 1796—has two recipes for pancakes, one for “Johny Cake, or Hoe Cake,” which calls for milk, “Indian meal,” and molasses, the other for “Indian Slapjack,” which drops the molasses, but adds four eggs.

Thomas Jefferson, who was fond of pancakes, sent a recipe home to Monticello from the President’s House in Washington, D.C., picked up from Etienne Lemaire, his French maître d’hotel (hired for his honesty and skill in making desserts). Lemaire’s “panne-quaiques” were what we would call crepes—made by pouring dollops of thin batter into a hot pan.  Modern pancakes—in Jefferson’s day known as griddlecakes—generally contain a leavening agent and are heftier and puffier.

I have enhanced the original Latvian recipe with the addition of a touch of Yogurt, whose inherent lactic acid makes for a more tender and delicious pancake (it works the same way buttermilk does in biscuits, as it happens!). These pancakes are both sinfully rich and delicious!

For those who are under the highly-mistaken idea that the Baltic countries have a herring-centric recipe canon, I hope this will dispel your beliefs and you will understand the true glory offered by Latvia and its recipes! 🙂