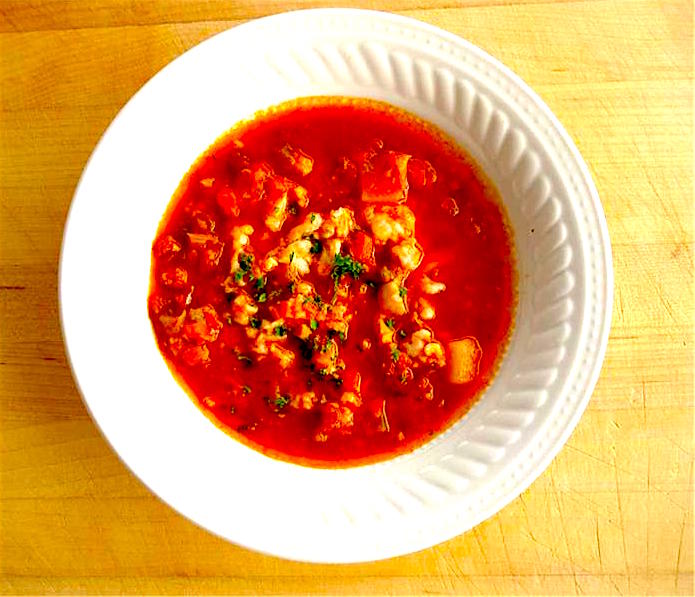 Citizens, it is time to turn our collective eyes to the southernmost reaches of Florida, which is home to one of the most delectable seafood chowders in the U.S.: the legendary conch chowder of Key West! 🙂

As noted on the blog whatscookingamerica.net:

“In the early 1800s, people from the Bahamas began migrating to the Keys. These immigrants were called conchs because of the sea snail they like to eat of the same name that was their staple food. By 1891, it is estimated that a third of the Key West population was Bahamian. This explains why the word conch is so much a part of the area’s heritage. Natives of Key West, Florida, and the Bahamas proudly call themselves Conchs.

Did you know: The name “conch,” pronounced “conk” is widely used in the Florida Keys to refer to a lifelong resident of the Keys. Native people born in Key West and the Bahamas call themselves conchs. In times past, proud parents in Key West placed a conch shell on a stick in the front of their house to inform neighbors of a new born infant.

People who take up residence in the Keys are humorously referred to as freshwater conchs. Politicians sometimes issue certificates to people active in community interests declaring them “honorary conchs”. Locals like being called conchs and take pride in the appellation. Source: Florida Keys Best.”

Conch is a common name that is applied to a number of different medium to large-sized sea snails that are used for food in the West Indies, and Key West region of Florida as well as Asia. In 1985, the harvesting of the conch was banned, and it is now illegal to take live conch in U.S. waters, where they are an endangered species. As a result, most conch now comes from the various Caribbean islands, including the Bahamas (where it is sometimes called ‘hurricane ham’).

Conch is FEROCIOUSLY tough and must be tenderized before eating – usually by beating it thoroughly with a mallet.

My version of this delicious chowder includes a respectful nod to North Florida with its use of the local Datil pepper hot sauce and several other TFD tweaks!

In a 6-quart Dutch oven combine two quarts water, hot sauce and vinegar; bring to a boil. Stir in the conch and tomato and spice mixture and simmer about two hours. Add sliced potatoes and simmer 20 to 30 minutes until potatoes are tender. Remove bay leaves before serving. Serve hot and garnished with fresh parsley.

TFD currently has a total of 1,351 posts and 1,128,567 words written since December of 2014! Add your voice to My 50,000+ dedicated readers, comment on My recipes and thus become an active member of TFD Nation! Looking for a particular recipe? Search for it in the box above or via the category tags below - there are THOUSANDS of the finest in world and historic recipes here!

Manage Cookie Consent
To provide the best experiences, we use technologies like cookies to store and/or access device information. Consenting to these technologies will allow us to process data such as browsing behavior or unique IDs on this site. Not consenting or withdrawing consent, may adversely affect certain features and functions.
Manage options Manage services Manage vendors Read more about these purposes
View preferences
{title} {title} {title}
350
SHARES
FacebookTwitterWhatsappPinterestMailYummlyFlipboard