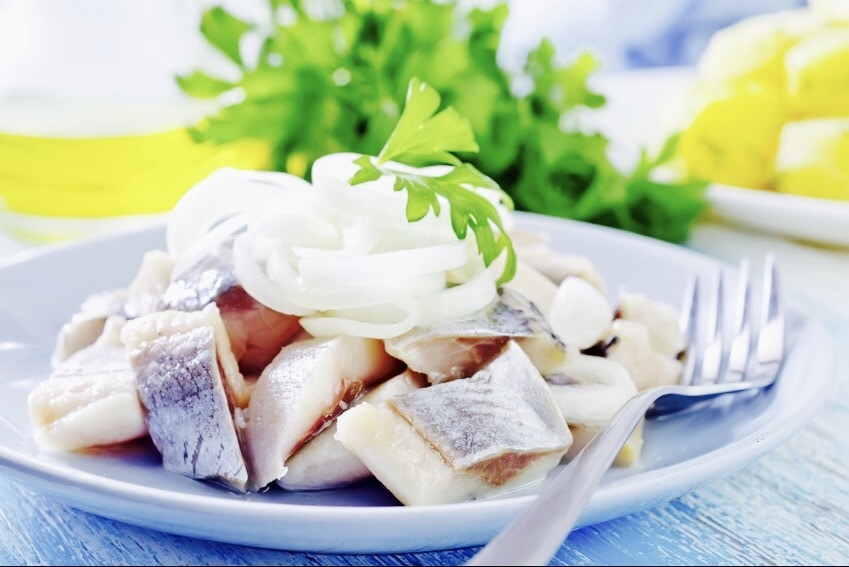 Citizens, your scholarly Leader has always been hell-bent on preserving traditional recipes from all cultures – and being Jewish, especially true for the storied dishes of my youth that are now almost impossible to find.

Pickled herring has an iconic place in any European Jewish heart, and I will now teach you the way to make it for yourself, as there are so few places left that serve the real deal – Russ and Daughters, Murray’s Sturgeon Shop, Zabar’s and a few others are all that remain of the once prolific “appetizing” stores of old NYC.

Most cured herring uses a two-step curing process. Initially, herring is cured with salt to extract water. The second stage involves removing the salt and adding flavorings, typically a vinegar, salt, sugar solution to which ingredients such as peppercorn, bay leaves and raw onions are added. In recent years, other flavors have also been added, due to foreign influences. However, the tradition is strong in Denmark, Sweden, Finland, Norway, The Netherlands, Iceland and Germany.

Pickled herrings have been a staple in Northern Europe since Medieval times, being a way to store and transport fish, especially necessary in meatless periods like Lent. The herrings would be prepared, then packed in barrels for storage or transportation.

In the Nordic countries, once the pickling process is finished and depending on which of the dozens of classic herring flavourings (mustard, onion, garlic, lingonberries etc.) are selected, it is eaten with dark rye bread, crisp bread, sour cream, or potatoes. This dish is common at Christmas, Easter and Midsummer, where it is frequently eaten with akvavit.

Pickled herring, especially brined herring, is common in Russia and Ukraine, where it is served cut into pieces and seasoned with sunflower oil and onions, or can be part of herring salads, such as dressed herring (Russian: Сельдь под шубой, Ukrainian: Оселедець під шубою, lit. ‘herring under a fur coat’), which are usually prepared with vegetables and seasoned with mayonnaise dressing.

Brined herring is common in Ashkenazi Jewish cuisine, perhaps best known for vorschmack salad known in English simply as “chopped herring” and as schmaltz herring in Yiddish. In Israel it is commonly called as dag maluach which means “salted fish”.

Herring is enjoyed as a special Sabbath food by Ashkenazi Jews worldwide and is a staple at Kiddushes and social gatherings. Many kosher establishments have begun to formulate new fusion-style herring dishes such as Oneg-Shabbos herring and herring-lox combinations. Younger herring consumers look for new and interesting styles, besides the simple pickled herring with onions. Herring is typically served on crackers such as kichel or Tam Tams.

, it’s not difficult in the least and you will be rewarded with a true taste of your ancestors! I’ve tweaked the pickling brine to my flavor preferences and added in some Nigella seeds, which are from India but are often found on Jewish rye bread crusts as a seasoning. You can purchase excellent salt herring fillets from here.