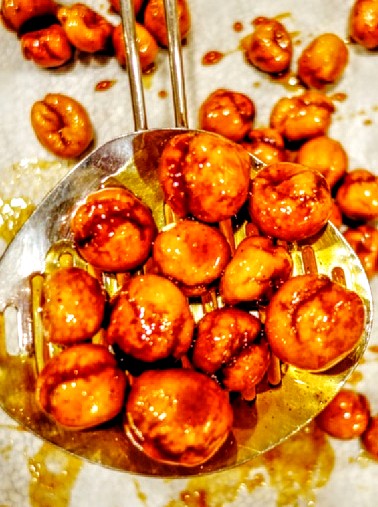 Citizens, owing to my near infinite and beneficent rule, I, the mighty TFD, have decided to share a SECOND sweet Jewish recipe with TFD Nation in celebration of Rosh Hashanah, the Jewish New Year!

This is an old-school Ashkenazi Jewish treat, only served during the Jewish New Year and related celebratory holidays such as Sukkot, Simchat Torah and Purim.

Teiglach literally means “little dough” in Yiddish and has its history in the Lithuanian Jewish community. While boiling dough in honey seems a bit odd, the dough cooks up crunchy like a cookie covered in a sticky honey syrup.

Tegilach date back to the times of the Romans who made strips of fried dough in honey called vermiculos.

Italian Jews adopted the dish but it disappeared from their repertoire in the Middle Ages. In the 12th century Franco-German rabbis mentioned eating a dish of fried or baked strips of dough covered in honey, known as vermesel or verimlish at the beginning of the Sabbath meal.

The name went through changes, being called
gremsel and then chremsel in Eastern Europe.

My version of this nearly-forgotten recipe (at least by many younger Jews) is of course enhanced to TFD standards, including a more heavily-spiced syrup for more flavor complexity and two of my favorite nuts, macadamia and pecan!

I hope you all enjoy this recipe and a L’shana Tova to my Jewish readers! What does this mean? This great article from Chabad.org explains:

The Jewish new year is not just a time to renew our resolve to lose another fifteen pounds. Rather, it’s the time when our fate stands in the balance as G‑d reviews our past year and decides whether or not to renew our lease on His planet. As such, Jewish greetings for this time of year (the Jewish New Year is in the fall) reflect our prayers for a good, sweet year up ahead.

The catch-all greeting you can use for the entire season is “Shanah tovah” (שנה טובה), which means “Good year.” The word “u’metuka” (ומתוקה), and sweet, is sometimes appended to the end.

Here are some other greetings that you may hear:

Before Rosh Hashanah, people wish each other “Ketivah v’chatima tovah”(כתיבה וחתימה טובה) “A good inscription and sealing [in the Book of Life].”

From noon on Rosh Hashanah, when our fates are already written, until Yom Kippur, when our fates for the coming year are to be sealed, we wish each other “Gemar chatimah tovah” (גמר חתימה טובה), “A good final sealing.”

Now for the Yiddish version: The standard wish is for “A gut gebentsht yohr,” “A good and blessed year” (א גוט געבענטשט יאהר). And since tradition tells us that our fate is not really sealed until Hoshanah Rabba, the customary salutation for that day is “A gutten kvittl” (א גוט’ן קוויטל), “A good inscription.”

No matter what we say, the main thing is to wish each other a good, sweet year with all our heart – because that is what G‑d values the most.

Sift sugar, flour and baking powder together. Add eggs, and enough oil to make a soft dough. Take pieces and roll into a rope about 1/3 to ½ inch thick.

Cut into small pieces as long as it is thick. Roll to make them little balls. Place on a jelly roll sheet and bake in 375F oven about 10 minutes, until lightly brown.

When dough balls are ready, heat the honey, sugar, water, nutmeg, lemon zest and ginger until it comes to a boil. Drop in the nuts and dough balls, cover, let simmer about 10 minutes and then uncover.

Let it simmer slowly; keep stirring until all the honey is absorbed; then turn out onto an oiled cookie sheet. Form into a cone or pyramid on a doily placed on a serving plate, and let cool. If you plan to keep teiglach for a few days, store in an airtight tin.