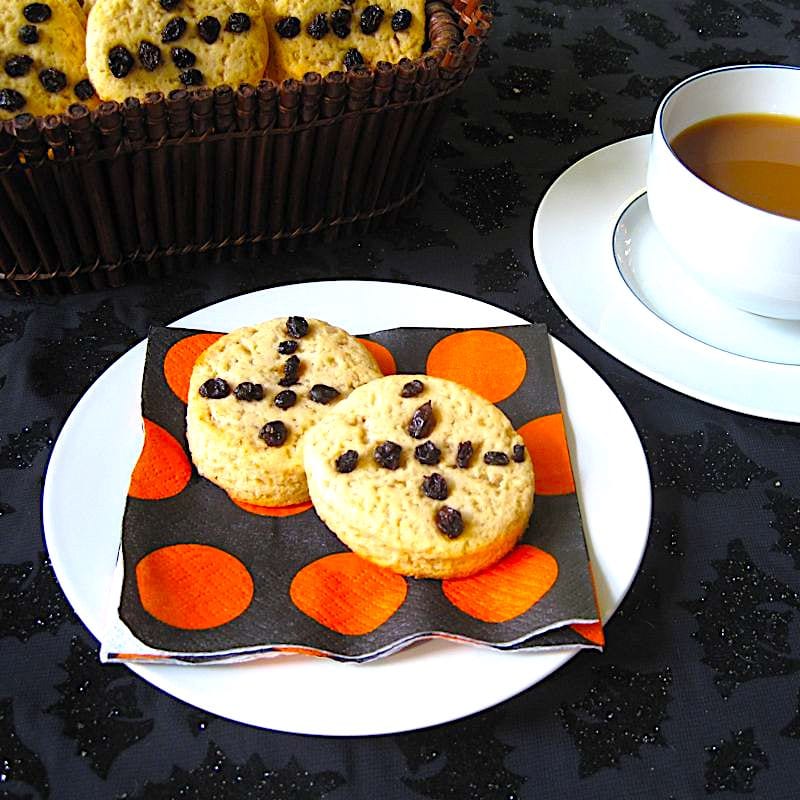 Citizens – Happy Halloween to you all! 🙂 Allow me to share an appropriate recipe for this most darksome of holidays!

A soul cake is a small round cake which is traditionally made for All Hallows’ Eve, All Saints’ Day and All Souls’ Day to commemorate the dead in the Christian tradition.

The cakes, often simply referred to as souls, are given out to soulers (mainly consisting of children and the poor) who go from door to door during the days of Allhallowtide singing and saying prayers “for the souls of the givers and their friends”. The practice in England dates to the medieval period, and was continued there until the 1930s, by both Protestant and Catholic Christians.

The practice of giving and eating soul cakes continues in some countries today, such as Portugal (where it is known as Pão-por-Deus), and in other countries such as Ireland, it is seen as the origin of the practice of trick-or-treating.

In Lancashire and in the North-east of England they are also known as Harcakes. In the United States, some churches, during Allhallowtide, have invited people to come receive sweets from them and have offered “pray for the souls of their friends, relatives or even pets” as they do so.

Among Catholics, traditionally the soul cakes are blessed by a priest before being distributed on the Eve of All Saints (Hallowe’en); in exchange, the children promise to pray for the souls of the deceased relatives of the giver during the month of November, which is a month dedicated especially to praying for the Holy Souls In Purgatory. Any leftover soul cakes are shared among the distributing family.

The tradition of giving soul cakes was celebrated in Britain or Ireland during the Middle Ages, although similar practices for the souls of the dead were found as far south as Italy.

The cakes were usually filled with allspice, nutmeg, cinnamon, ginger or other sweet spices, raisins or currants, and before baking were topped with the mark of a cross to signify that these were alms. They were traditionally set out with glasses of wine on All Hallows’ Eve as an offering for the dead, and on All Saints’ Day and All Souls’ Day children would go “souling”, or ritually begging for cakes door to door.

In 1891, Rev. M. P. Holme of Tattenhall, Cheshire, collected the song traditionally sung during souling, from a little girl at the local school. Two years later, the text and tune were published by folklorist Lucy Broadwood, who commented that souling was still practiced at that time in Cheshire and Shropshire. Further recordings of the traditional soul-cake song were collected in various parts of England until the 1950s. Versions collected later may have been influenced by folk revival recordings of the song by such groups as The Watersons.

Citizens, Ireland has slowly started reviving this custom today and I hope you will enjoy my version of these toothsome cakes!