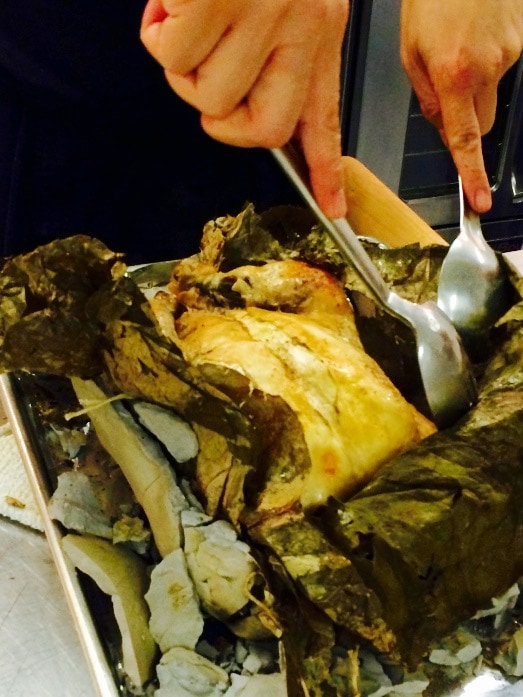 Citizens, behold one of the greatest dishes in the Chinese recipe canon! 🙂 The chicken is stuffed, wrapped in clay, and then roasted. At first glance, the dish may look nasty and cheap, but don’t let it scare you away – a succulent and delicious treasure awaits inside that ugly shell!

Beggar’s Chicken originated in Jiangsu Province and belongs to Jiangsu and Zhejiang Cuisine.

Legend has it that during the Qing dynasty, a hungry beggar stole a chicken from a rural farm. The farmer caught wind of the crime and chased the beggar down to a riverbank.

To hide his loot, the beggar buried the chicken in mud. Later that evening, the beggar returned the river, lit twigs on fire and set the mud-soaked chicken directly on top of the flame.

The result? A tight clay crust formed over the chicken. When cracked open, the feathers fell right off to reveal aromatic, tender meat. 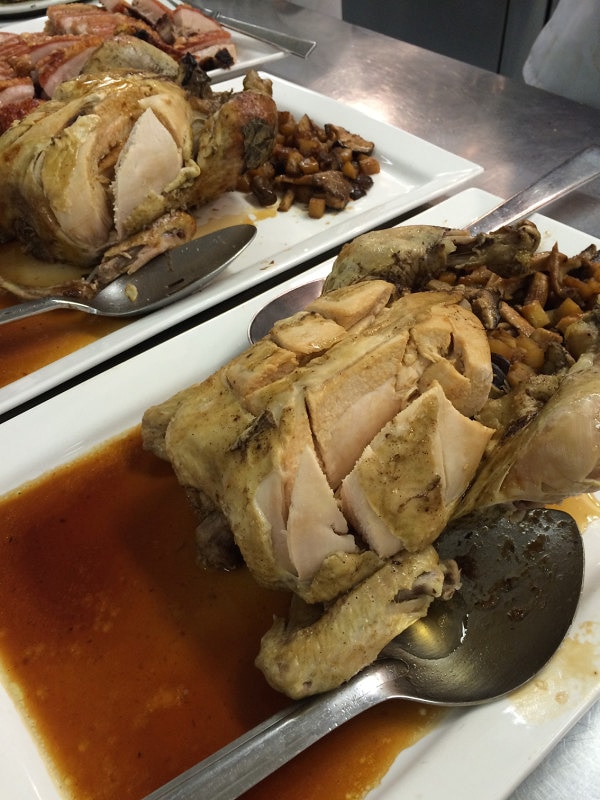 The Emperor, who happened to be passing through, stopped to dine with the beggar and declared this dish so delicious that it was added to the Imperial Court menu. And, rather than keep his new-found dish a secret, the beggar rose from poverty by selling Beggar’s Chicken to local villagers.

Citizens, this is by no means an easy recipe – yet I share my amped-up imperial version with you because I have faith in your cooking abilities and because TFD brooks zero compromise in his recipes!

What makes my version Imperial? First, I wrap the chicken in caul fat, a lacy fatty membrane that self-bastes the chicken as it is wrapped in the lotus leaves, which themselves impart an incredible fragrance to the bird as well as protecting it from the clay.

Then, it’s all in the stuffing, where I add in rare Chinese dried scallops, healing herbs plus a marinade of Chinese liquor flavored with rose petals and spices! Also, for the sauce, I use a chicken stock infusion of dried shiitakes and dried scallops instead of the simple plain water used by lesser recipes.

Lastly, I up the visual ante by painting the outside clay shell with a bold Imperial yellow symbol for China – 中国 (Zhōngguó)! If you choose to use the bread dough coating instead of clay, you can use yellow food coloring.

For all these reasons, I have replaced the standard name of Beggar’s Chicken (叫花童雞) for this recipe with “富贵雞” (literally “rich and noble chicken”) – a dish truly fit for serving before the Son of the Dragon!

Sufficient Pig’s Caul Fat to wrap chicken – you can special order this from your butcher
5 large dried Lotus Leaves – 荷叶
1 tablespoon Sesame Oil (to be drizzled over the stuffing after chicken is cooked)
Cilantro Leaves for garnishing when serving, optional
Butcher’s twine for tying

10 pounds of Sculptor’s or potter’s earth clay – this is available in sculpture and pottery equipment and supply houses. It is *imperative* that you use earth clay and not a product called plasticine!

Put all the ingredients B (except for the ginger juice) in a small saucepan and heat over low heat for about 5-10 minutes until the spices are infused into the liquid.

Let this marinade cool before adding the ginger juice. Pour over the patted dry-brined bird and into the cavity too. Marinate the chicken in the refrigerator for at least 6 hours.

Reconstitute the lotus leaves in hot water. When softened, rinse well to get rid of any residual mud and set aside.

Scald the pork belly in boiling hot water then cut into ½ inch cubes.

Add the prawns and the rest of the Ingredients C and stir-fry until the meat is completely done. Place the stuffing in a bowl and let cool.

When the stuffing is cool enough to handle remove the chicken from the marinade and brush off the spices. Stuff the chicken and tie the legs together with butcher’s twine.

Place the chicken on a piece of lotus leaf breast side up. Fold the leaf over the sides and wings of the chicken onto the breast.

Fold the other sides of the leaf to cover the head and tail of the chicken. Flip the wrapped chicken over and place it on another lotus leaf and repeat the folding.

Flip the chicken again and wrap a third leaf around it. The chicken should now be completely covered. Tie the wrapped chicken tightly with butcher’s twine. Cover the entire package with a layer of clay about ¼ inch thick.

To prepare the dough, place the flour in the center of the work surface and make a well in the center. Add the hot water slowly with one hand as you mix with the other. When the water is absorbed, knead for about 2 minutes to make a dough.

Coat your hands with peanut oil and rub the dough with some pressure to coat it. Rub your hands on the work surface as well. Flatten the dough until it is large enough to wrap the chicken completely.

Now paint the outside clay shell with a bold Imperial yellow symbol for China – 中国 (Zhōngguó)! If you choose to use the bread dough coating instead of clay, you can use yellow food coloring instead. Add abstract designs on the clay or dough as you see fit

When ready to serve, dramatically crack the clay in front of your guests and unwrap the lotus leaves. Remove the stuffing and place in a serving dish. Drizzle the reserved 1 tablespoon sesame oil over the stuffing. Serve hot with sauce on the side and garnished with cilantro leaves.

Add
495shares
TFD uses cookies and we comply with GDPR so you control your personal info! If you continue on, we will assume you are happy with this, Citizen! OkNoRead more