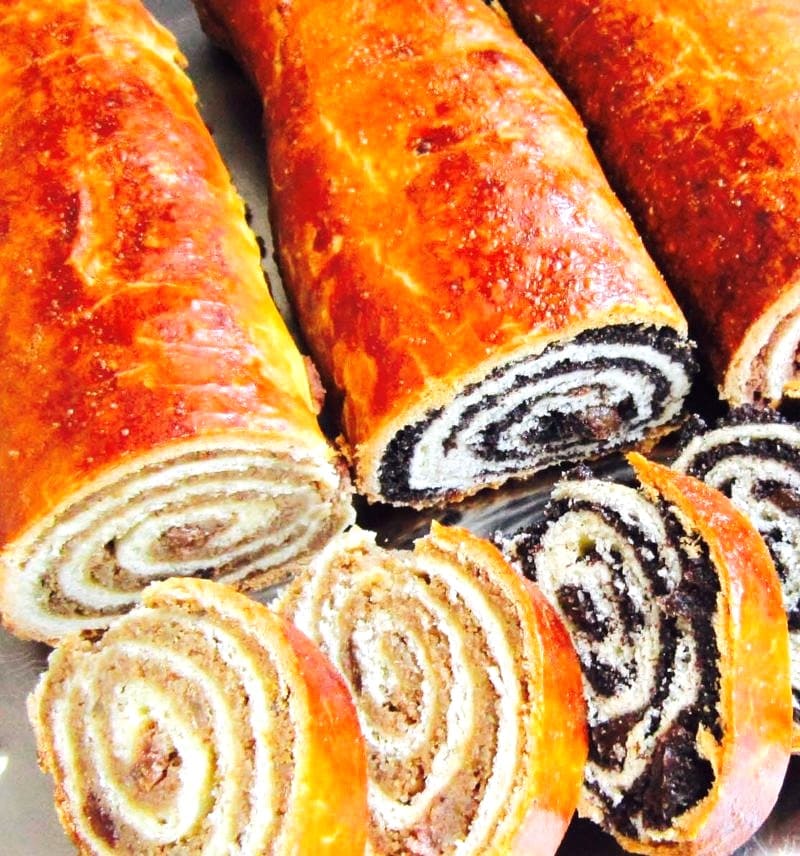 Citizens, Beigli (sometimes spelled Bejgli) is a delicious Hungarian Christmas treat. This pastry is ubiquitous around Christmastime, you can buy it in practically any shop or bakery.

Both walnut (diós) and poppy seed (mákos) bejgli are traditional. In Hungarian cuisine the rolls, one with each filling, are traditionally served together. The combination is known as mákos és diós (poppy seed and walnut).

Makosh (Mákos Beigli) is a cake-like yeast roll with a poppy seed filling.

Kuchen rolls are very popular in central and eastern Europe; they probably originated as a means of transforming some extra bread dough into a special treat for the family. The yeast dough was rolled into a thin rectangle, spread with a sweet filling, and rolled into a cylinder jelly-roll style.

The original cake rolls were commonly filled with the most popular medieval central European spice, poppy seeds (mohn in German and mák in Hungarian), and the name of the rolls became simply makosh in Hungary. Hungarians also made a filling from ground walnuts (diós).

Poles and Germans generally spread the dough with a thicker layer of filling and let the shaped roll rise to produce thicker cake layers. Hungarians tended to roll out the dough very thin and to not allow it to rise, instead rushing it directly into the oven; the resulting pastry had very thin cake layers alternating with thin layers of filling, akin to the layers in a yeast strudel.

Although central and eastern European Jews have a long tradition of yeast cake rolls, including the Polish babka, none embraced them as enthusiastically as the Hungarians.

Many Hungarians serve makosh, kakosh, diós beigli (walnut roll), or one or more of the other variations on every Sabbath and at life-cycle events.

In the late twentieth century, some Hungarian Jewish commercial bakeries in America began introducing these rolls to the wider public and chocolate and poppy seed rolls became commonplace at American gourmet shops. From a land renowned for its pastry, makosh and kakosh rank with the best of Hungarian specialties.

Most families in Hungary have their own Beigli recipe – this is mine. Try it as a fitting end to a Hungarian feast, perhaps including the classic goulash!:)