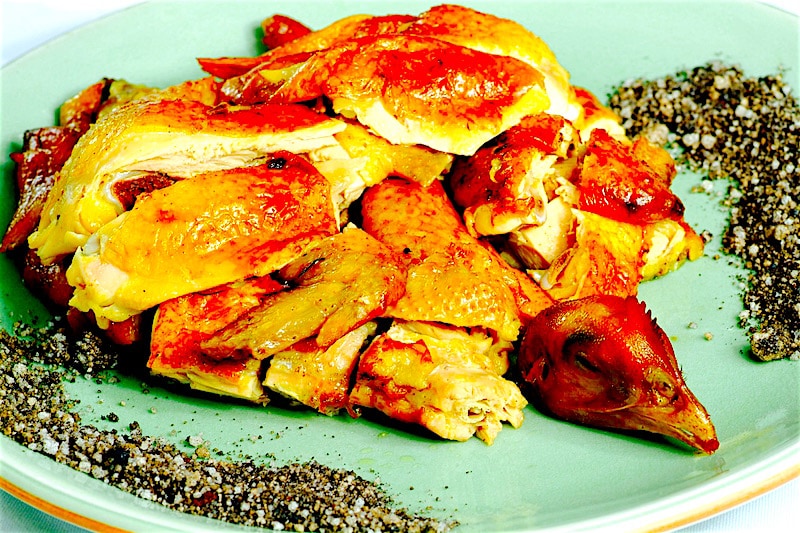 Citizens, it’s been a delightful week off for your beloved TFD – I return reinvigorated for the battles at hand! 😀

As it happens, the almighty Generalissimo is extremely fond of Hakka-style Chinese cuisine, so it is time to introduce you all to it as well! 🙂

Hakka cuisine, or Kuhchia cuisine, is the cooking style of the Hakka people of far-Southern China and Taiwan, who were famed traders throughout the China seas. As a result, Hakka settled all over, and may also be found in parts of Taiwan and in countries with significant overseas Taiwanese communities.

The Hakka people have a marked cuisine and style of Chinese cooking which is little known outside the Hakka home. It concentrates on the texture of food – the hallmark of Hakka cuisine.

Whereas preserved meats feature in Hakka delicacy, stewed, braised, roast meats – ‘texturized’ contributions to the Hakka palate – have a central place in their repertoire. In fact, the raw materials for Hakka food are no different from raw materials for any other type of regional Chinese cuisine: what you cook depends on what is available in the market.

Hakka cuisine may be described as outwardly simple but tasty. The skill in Hakka cuisine lies in the ability to cook meat thoroughly without hardening it, and to naturally bring out the umami taste of meat.

The Hakka who settled in the harbor and port areas of Hong Kong placed great emphasis on seafood cuisine. Hakka cuisine in Hong Kong is less dominated by expensive meats; instead, emphasis is placed on an abundance of vegetables.

Pragmatic and simple, Hakka cuisine is garnished lightly with sparse or little flavoring. Salt-baked chicken is outwardly simple, but the technique is all!

11 years ago, on the eGullet.org website, I participated in a discussion with the acknowledged master of Chinese cooking there about how to make this succulent dish. This is the master’s version, with numerous changes made by me (noted as such in the recipe) and Ben Hong (also noted).

The classical Salt Baked Chicken calls for using parchment paper to wrap up a whole chicken, then bury it in a pot of coarse salt and simmer.

Many modern restaurants choose to boil or steam the chicken instead because it’s easier. Many Chinese restaurants advertise that they have their “secret recipes”. I have my own secret recipe too. But I will reveal my secret to you!

I have tried making Salt Baked Chicken by baking the chicken in the oven. I want the skin to be a bit dry and crispy instead of the soft and fatty steamed version. Here is the result:

There is a special ingredient you need to make Salt Baked Chicken.

It is a dry ginger powder made from a special species of ginger. In Cantonese, it is called “Sa Geung” (or literally means “Sand Ginger”). You can easily find them in Asian grocery markets (TFD note – or on Amazon). They may be translated as “Spicy Bake Mix”. They are basically dry ginger powder mixed with salt and some MSG. “Sa Geung” has a very characteristic taste and smell.

To make this dish, you need to use 2 packs of the “Spicy Bake Mix”.

Take 2 small bowls. Use 1 ½ packs of “Spicy Bake Mix” and divide them into 2 equal halves. Save the ½ pack to make the condiment.

In one of the bowl, add 2 tsp of five spice powder and about 5 to 6 star anises. Break the star anises into small pieces. Mix the mixture well with a spoon.

Clean a 4 ½ pound chicken thoroughly, rinsing it out under cool tap water and wiping it dry (inside and out) with paper towels. Cut 2-inch-long incisions under each wing and then poke the outer two segments of the wings into the body so that the wing drumsticks lie flush against the body and protect them from burning. Place the chicken breast-side up on a work surface and press down firmly on the breast to flatten it so that the chicken is as compact as possible.

Rub the mixture with five spice and star anise in the cavity of the chicken. (TFD Change): Stuff with scallions and sliced ginger to taste – use a lot. Truss the bird as watertight as possible after “stuffing”. Then rub the outside of the chicken with the plain “Spicy Bake Mix”, mixed with the Chinese rose wine or dry vermouth to form a paste (TFD change, original was just the powder, not a paste).

Make sure the dry ginger powder paste is spread evenly on the surface of the chicken.

If you want to chicken skin dry and crispy, use a rack to hold up the chicken. Place a small fan about 3 to 4 feet from the chicken and blow the chicken indirectly at low speed for a couple of hours (TFD note – or just leave it overnight in the fridge).

Then I sprinkle more Chinese rose wine or vermouth over the bird (this is a TFD change) to moisten (no wrapping) and put it into the salt nest. Cover and bake for 1 hour 30 minutes of baking at 325F. Then, turn up the oven to 400F. Continue to bake for another 30 minutes.

Meanwhile, make the condiment – chung yao (the TFD version of this fantastic dip is here). Scoop into small dishes to serve at dinner table.

When done, use two sturdy spatulas and lift the bird out onto a plate, brushing off the loose salt. The salt that is next to the skin has formed a crust, which you would peel away and discard, leaving a crisp, dry skin. Check the chicken’s doneness by piercing the thickest part of the thigh with a chopstick; the juices should run very clear.

The skin is crispy and the chicken meat is moist and succulent.

Carve the chicken at dinner table, or chop it up with a cleaver. Serve with dry-fried salt and black pepper on the plate (TFD change).

Dry-fried salt and pepper: Coarsely grind about 2 tablespoons of black pepper and place it in a dry wok (this means no oil).

Add about 2 tablespoons coarse sea salt. Mix these together over medium heat, tossing often, until the pepper starts to smoke a bit and the salt is gray. Scoop it out into a bowl, cool to room temperature, and store in a covered jar.