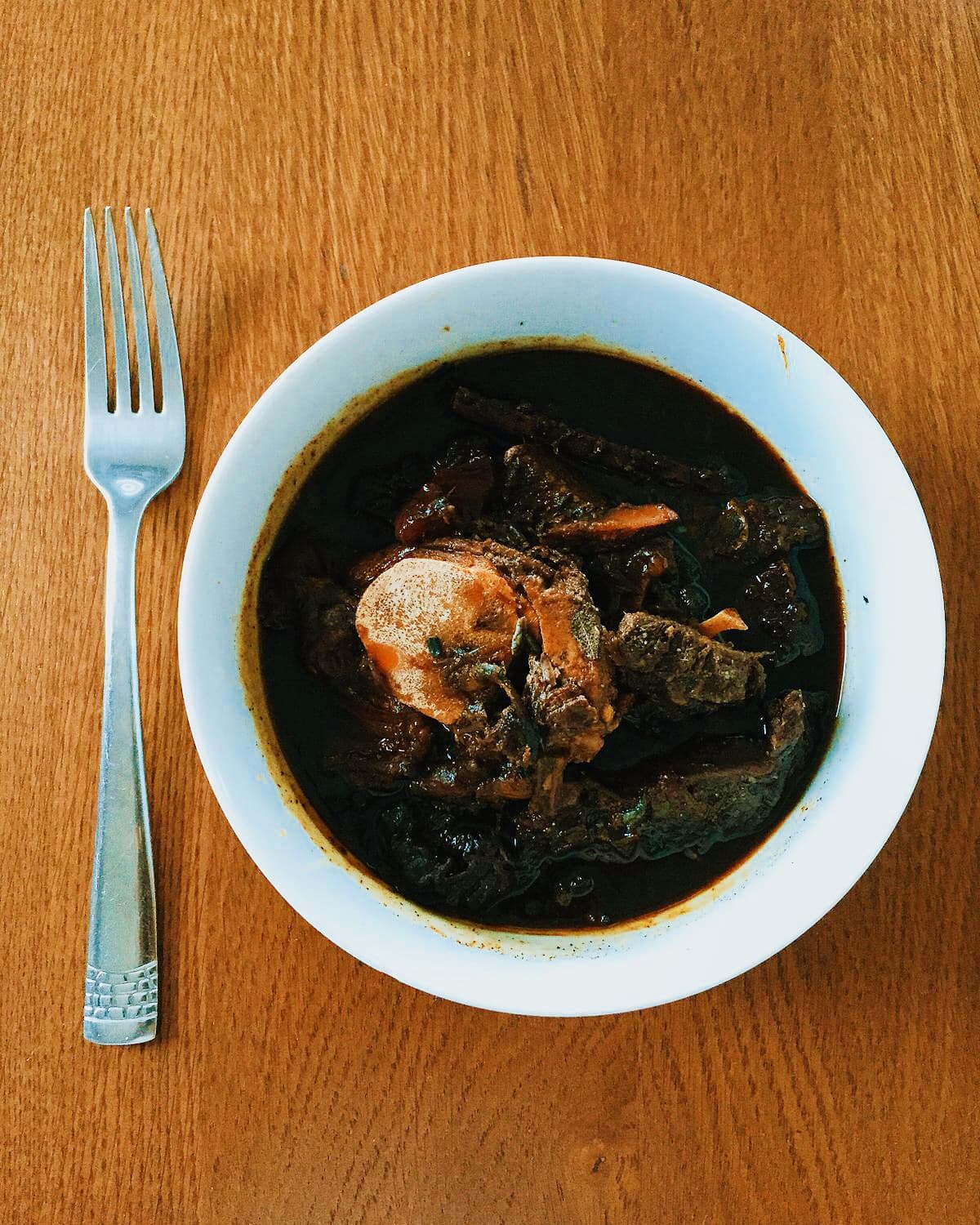 Citizens, your glorious leader – the bookish and erudite TFD! – recently came across an article about superstar Rihanna that mentioned her favorite food was Guyanese Pepperpot! It turns out that while she is from Barbados, her mother is a 100% full-blooded native of Guyana – and since I was unfamiliar with this dish, ! 😀

This recipe does rely on unique ingredients, including Guyanese Wiri Wiri peppers, which thankfully you can buy seeds for here.

Fear not, I provide alternatives to any hard-to-find ingredients!

The history of pepperpot in the Guyanese Christmas is difficult to uncover. We can say with certainty that the dish had its beginnings with the Indigenous peoples of the land that eventually became Guyana. The tribes separately discovered the amazing preservative properties of liquid extracts from the poisonous bitter cassava root. The other tribes discovered the liquid which is called “kada” or “kadakura sauce”. This sauce is used to make the dish known as “tuma pot”. On the other hand, the Arawaks discovered the liquid we now call “cassareep”.

Cassareep is fundamental to the pepperpot formula. There are two varieties of cassava root – sweet and, as previously mentioned, bitter. Cassareep is made from the bitter cassava root. The Arawaks originally discarded the liquid that was extracted from the grated cassava that they used to make cassava flour. Eventually, it was found that the dark brown liquid that resulted from the liquid being left in the sun was a natural preservative. The usefulness of such a substance was immediately evident to the Arawaks and the stage was thus set for the dish that has become pepperpot.

The Pepperpot Magazine spoke with Bridget Walcott, a cassareep producer from Wakapoa. She was able to give an outline of the process involved in making cassareep in the present day. Many similarities remain. The bitter cassava is harvested and grated then placed in a matapee. The liquid is collected in a pail. Walcott explained that a hundred pounds of grated bitter cassava yields roughly a pail of liquid, depending on how dry the cassava is.

Each pail produces a single bottle of cassareep Walcott said. She noted that the liquid is allowed to settle for one hour and then strained before it is boiled. Boiling is a crucial part of the modern process as bitter cassava root contains the poisonous acetone cyanohydrin which becomes the highly toxic hydrogen cyanide on contact with water. Fortunately, hydrogen cyanide is quite volatile and rapidly evaporates upon heating.

Walcott said that about half a gallon of the liquid is boiled to create the cassareep. Boiling is done on an open fire and she explained that the boiling time depends on the positioning of the firewood on the fire. At a steady boiling temperature, making the actual cassareep takes about two hours she noted. The finished cassareep has the consistency of molasses and a sweet flavour. Spices, including cloves, cinnamon and salt, may be added to enhance its flavour.

The processes of making cassareep and kadakura sauce are related. This was explained to the Pepperpot Magazine by Michael Patterson, owner of Tuma Sàlà. The restaurant specialises in Indigenous cuisine, including tuma pot. The main ingredient in tuma pot is the kadakura sauce. As he explained, the dish is made from the liquid that is present before boiling breaks the liquid down into cassareep. While the liquid is simmering, he said, there is a frothy broth that forms on the surface of the boiling liquid. This broth is scooped up and placed in another pot to boil. Eventually, layer by layer, a sauce is formed that is used in tuma pot. The sauce usually has a cream or lightly golden colour. The tuma pot created from this sauce may use fish or meat.

Given the importance of pepperpot, it should not be surprising that manufacturing cassareep can be a source of income, especially at Christmastime. Indeed, one of the best illustrations of that point is the current presence of bottled cassareep on supermarket shelves. Bridget Walcott makes an income from selling the cassareep she makes. She takes orders and then, every fortnight or so, goes to Charity on market day to sell the cassareep. Sometimes she supplements her supply with cassareep she buys from other makers. This becomes especially necessary during the holidays when the demand for cassareep spikes.

The method utilised when making pepperpot depends on which chef one asks. Some boil the meat with the cassareep before adding water, some add the cassareep and water after the meat has boiled. The chosen spices that are added to the stew vary. The original pepperpot would have included wild meat. It still does sometimes. It is generally agreed though that beef is the meat for pepperpot. Chunks of beef, bones included, are thrown into the pot. Cow heels and ox tails may also be included.

The traditional version of Pepperpot contains a truly astonishing amount of sugar, salt and fat. This healthier adaptation replaces the cow’s feet with lean beef shoulder and uses much less added sugar and salt. My version is adapted closely from a recipe by Sobia Khan, but has different spicing and meat ratios – I have every confidence you will love this, Citizens!