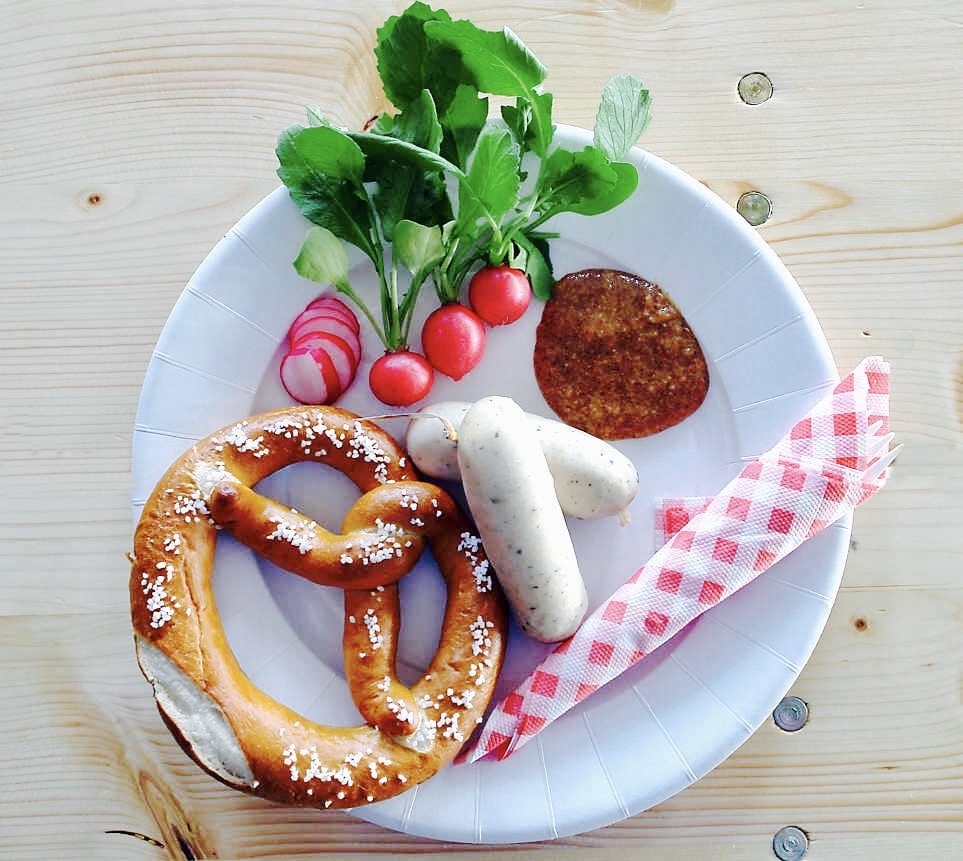 Citizens, few things in life are as satisfying and toothsome to your beloved leader as a soft pretzel made in the traditional Bayerischer (Bavarian) style! Add in München (Munich) Oktoberfest, where I first tried these saline delights with a tall stein of Hefeweizen (wheat beer) and you have the makings of true gustatory ecstasy!

A pretzel is a type of baked bread product made from dough most commonly shaped into a twisted knot. Pretzels originated in Europe, possibly among monks in the Early Middle Ages.

The traditional pretzel shape is a distinctive nonsymmetrical form, with the ends of a long strip of dough intertwined and then twisted back into itself in a certain way (“a pretzel loop”).

Salt is the most common seasoning for pretzels, complementing the lye treatment that gives pretzels their traditional “skin” and flavor through the Maillard reaction. True fact – the best pretzels made without lye in the U.S. are found in Philadelphia due to the heavily-chlorinated (and repulsive) tap water found in the city that replicates the effects of lye!

There are numerous unreliable accounts regarding the origin of pretzels, as well as the origin of the name; most assume that they have Christian backgrounds and were invented by European monks.

According to legend, as cited by several sources, including The History of Science and Technology, by Bryan Bunch and Alexander Hellemans, in 610 AD “…[a]n Italian monk invents pretzels as a reward to children who learn their prayers. He calls the strips of baked dough, folded to resemble arms crossing the chest, ‘pretiola’ (“little reward[s]”)”. However, there is no known historical evidence to verify this claim.

Another source locates the invention in a monastery in southern France.

The looped pretzel may also be related to a Greek ring bread, derived from communion bread used in monasteries a thousand years ago.

In Germany, there are stories that pretzels were the invention of desperate bakers held hostage by local Dignitaries. Meyers Konversations-Lexikon from 1905 suspects the origin of pretzels in a ban of heathen baking traditions, such as in the form of a sun cross, at the Synod of Estinnes in the year 743. The pretzel may have emerged as a substitute.

The German name “Brezel” may derive also from Latin bracellus (a medieval term for “bracelet”), or bracchiola (“little arms”).

The pretzel has been in use as an emblem of bakers and formerly their guilds in southern German areas since at least the 12th century.

A 12th-century illustration in the Hortus deliciarum from the southwest German Alsace region (today France) may contain the earliest depiction of a pretzel.

Within the Christian Church, pretzels were regarded as having religious significance for both ingredients and shape. The knot shape has been claimed to represent hands in prayer.

Moreover, the three holes within the pretzel represent the three persons of the Holy Trinity: God the Father, God the Son, and God the Holy Spirit.

Pretzels made with a simple recipe using only flour and water could be eaten during Lent when Christians were forbidden to eat eggs, lard, or dairy products such as milk and butter.

As time passed, pretzels became associated with both Lent and Easter. Pretzels were hidden on Easter morning just as eggs are hidden today, and are particularly associated with Lent, fasting, and prayers before Easter.

Like the holes in the hubs of round Swedish flat bread (which let them be hung on strings), the loops in pretzels may have served a practical purpose: bakers could hang them on sticks, for instance, projecting upwards from a central column, as shown in a painting by Job Berckheyde (1630–93) from around 1681.

This recipe was originally from a German bakery – this particular pretzel is great for sandwiches or for spreading in butter. Lye can be a little tricky to find but it will give your pretzels the best color and aroma compared to baking soda.

(IMPORTANT!!! Lye is VERY, VERY caustic so make sure you are wearing rubber gloves and working in a well ventilated room – you might want to wear safety glasses and a nose/mouth mask as well).

Needless to say, you should use pretzel salt for covering these pretzels! Pretzel salt is large flake, soft and compressed – you can buy it here.

The unique TFD tweak to this recipe is to use garlic and spice-laden Svanetian salt from the mighty country of Georgia in the dough! You can just use regular pretzel salt for the classic recipe, but I love the flavor this unique salt brings to the final product! The recipe for Svanetian salt may be found here.

Of course, you MUST serve these in the classic fashion with lashings of sweet German mustard! I prefer this brand.