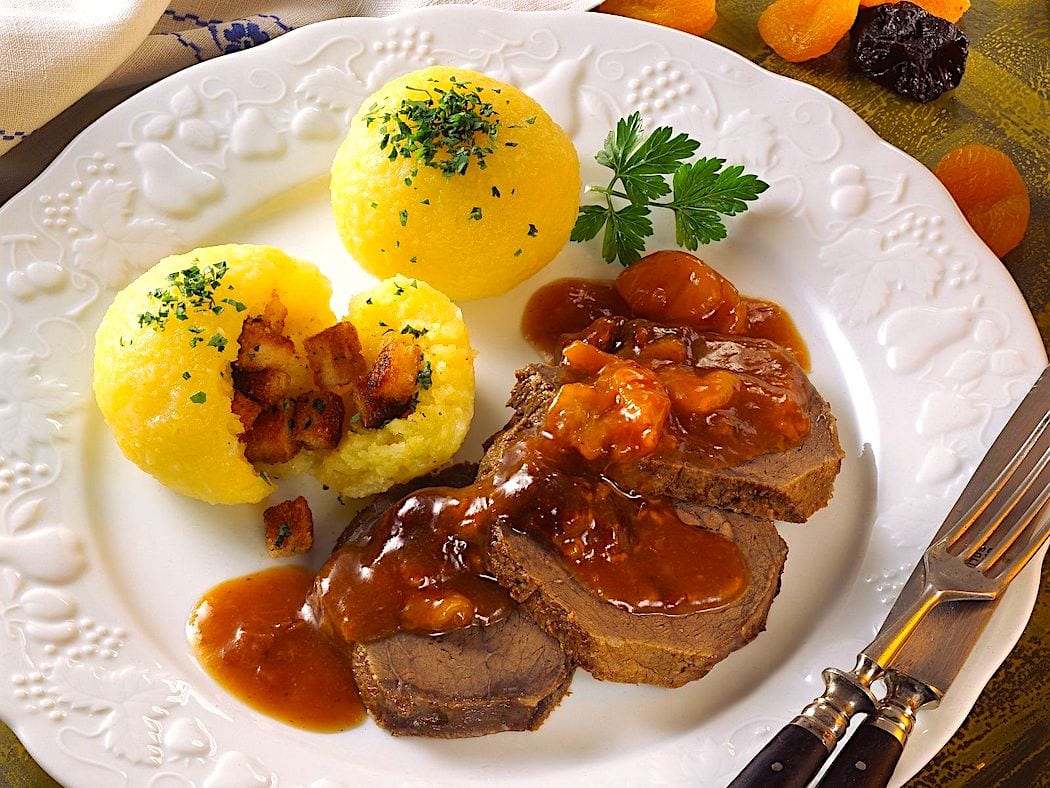 Citizens, Sauerbraten (German: “sour roast” from sauer for “sour” or “pickled” and Braten for “roast meat”) is a German pot roast that can be prepared with a variety of meats—most often beef, but also from venison, lamb, mutton, pork, and traditionally, horse.

Before cooking, the cut of meat is marinated for several days (recipes vary from three to ten days) in a mixture of vinegar or wine, water, herbs, spices, and seasonings. Since usually tougher cuts of meat (like rump roast, or bottom round of beef) are used for Sauerbraten, the longer marinating of the meat acts to tenderize it, resulting in a finished dish that is tender, soft, and juicy. The ingredients of the marinade vary based on regional styles and traditions throughout Germany.

Sauerbraten is regarded as one of the national dishes of Germany and is one of the best known German meals. Thanks to widespread German immigration to the New World (the United States, Argentina, etc.), it is frequently found on the menus of German-style restaurants outside Germany. Several regions’ variations on the dish are well known including those from Franconia, Thuringia, Rhineland, Saarland, Silesia, and Swabia.

Sauerbraten is traditionally served with traditional German side dishes, such as Rotkohl (red cabbage), Knödel or Kartoffelklöße (potato dumplings), Spätzle (an egg and flour noodle), and boiled potatoes. While many German-style restaurants in America pair potato pancakes (either Kartoffelpuffer or Reibekuchen) with sauerbraten, this is common only in a small part of Germany.

Julius Caesar has been assigned a (legendary) role in the inspiration for sauerbraten. as he sent amphoras filled with beef marinated in wine over the Alps to the newly-founded Roman colony of Cologne. According to this legend (Julius Caesar was murdered in 44 BC and the Roman city of Cologne was founded in 50 AD), this inspired the residents of Cologne to imitate the Roman import.

Several sources believe sauerbraten was invented by Charlemagne in the ninth century AD as a means of using leftover roasted meat. Saint Albertus Magnus, also known as Saint Albert the Great and Albert of Cologne, is also credited with popularizing the dish in the thirteenth century.

Citizens, my recipe has passed muster with my German friends and I hope you find it worthy of inclusion at your own table soon! 🙂