Citizens! Fried rice is, of course, one of the most popular dishes at any Chinese restaurant. Yet, you may be unaware that there are several versions of the recipe, with one in particular barely ever showing up in Cantonese restaurants (Which are the staple province of origin for most Chinese restaurants).

One of TFD’s favorite alternative recipes for fried rice is from the southern province of Fujian. one of the ancient capitals of gastronomy in China!

Fujian (Chinese: 福建; pinyin: Fújiàn), formerly romanized as Foken, Fouken, Fukien, and Hokkien, is a province on the southeast coast of mainland China. Fujian is bordered by Zhejiang to the north, Jiangxi to the west, and Guangdong to the south. The name Fujian came from the combination of Fuzhou and Jianzhou (a former name for Jian’ou) two cities in Fujian, during the Tang dynasty. While its population is chiefly of Han origin, it is one of the most culturally and linguistically diverse provinces in China.

Fujian Province, where most of the overseas Chinese in southeast Asia originated from, is still famously known as the Hokkien Province, based on the local pronunciation of the two Chinese characters “福建”.

Because of its mountainous nature and the numerous waves of migration from central China in the course of history, Fujian is one of the most linguistically diverse places in all Han Chinese areas of China. Local dialects can become unintelligible within 10 kilometres (6.2 mi). This is reflected in the expression that “if you drive five miles in Fujian the culture changes, and if you drive ten miles, the language does”.

Most varieties spoken in Fujian are assigned to a broad Min category. Early classifications, such as those of Li Fang-Kuei in 1937 and Yuan Jiahua in 1960, divided Min into Northern and Southern subgroups. More recent classifications subdivide Min into:

(The seventh subdivision of Min, Qiong Wen, is not spoken in Fujian.) Hakka, another subdivision of spoken Chinese, is spoken around Longyan by the Hakka people who live there.

As is true of other provinces, the official language in Fujian is Mandarin, which is used for communication between people of different localities.

Fujian cuisine is from one of the 8 great Chinese cooking regions derived most notably from the area of Fuzhou. Fujian-style cuisine is known to be light but flavorful, soft, and tender, with particular emphasis on umami taste, known in Chinese cooking as “xianwei” (simplified Chinese: 鲜味; traditional Chinese: 鮮味; pinyin: xiānwèi), as well as retaining the original flavor of the main ingredients instead of masking them.

Many diverse seafoods and woodland delicacies are used, including a myriad variety of local fish, shellfish and turtles, or indigenous edible mushrooms and bamboo shoots, provided by the coastal and mountainous regions of Fujian. The most commonly employed cooking techniques in the region’s cuisine include braising, stewing, steaming and boiling.

Particular attention is paid on the finesse of knife skills and cooking technique of the chefs, which is used to enhance the flavor, aroma and texture of seafood and other foods. Strong emphasis is put on the making and utilizing of broth and soups. There are sayings in the region’s cuisine: “One broth can be changed into numerous (ten) forms” (simplified Chinese: 一汤十变; traditional Chinese: －湯十變; pinyin: yī tāng shí biàn) and “It is unacceptable for a meal to not have soup” (simplified Chinese: 不汤不行; traditional Chinese: 不湯不行; pinyin: bù tāng bù xíng).

Fujianese fried rice takes many of these characteristics in its recipe – rice and egg are stir-fried together and then a gravy made of fresh seafood, poultry, dried mushrooms and vegetables is poured over it.

I found these tips to be particularly useful in making fried rice:

1. Use long grain non-sticky rice. This would help achieve that signature fluffy and non-sticky texture you find in restaurants without having the same high heat stove that restaurants use.
2. Use overnight leftover rice to efficiently avoid rice from lumping together. If you don’t have previously refrigerated rice then try to cook the rice with 1 tsp of cooking oil and slight less water. Cool the rice to room temperature before frying
3. Fry over high heat. This is especially important if you add vegetables to the fry rice because you’ll end up with watery fried rice if your wok is not hot enough.

This is a delicious recipe that has more than a touch of TFD‘s magic in it, Citizens! 🙂

a dash of Maggi Seasoning (TFD optional addition, be sure to use just a dash or it will be overwhelming!)
1 tbsp Oyster sauce
2 tbsp Shaoxing rice wine
1 tbsp Sugar
1 tsp White pepper powder

1. Prepare the shrimps. Cut into small pieces (optional). Let them sit for 10 minutes in iced heavily-salted water. Drain and reserve.
2. In a frying pan, heat up some peanut oil on high heat. Add minced garlic and sauté with diced mushroom. Add diced vegetable, scallions and shrimp. Sauté thoroughly until fully cooked, about 3 minutes.
3. Add remaining brown sauce ingredients and bring to a simmer, about 2 minutes.
4. Add a bit of thickening sauce and reduce to low heat – thicken to taste with more sauce if needed. Set aside.
5. In a separate pan, add beaten egg to cook on high heat. When egg is half cooked, add rice and mix well. Stir-fry until all egg is cooked and the grains of rice are separated. Add salt to taste and sesame oil and stir.
6. Transfer the fried rice onto a serving bowl. Pour the shrimp brown sauce over rice. 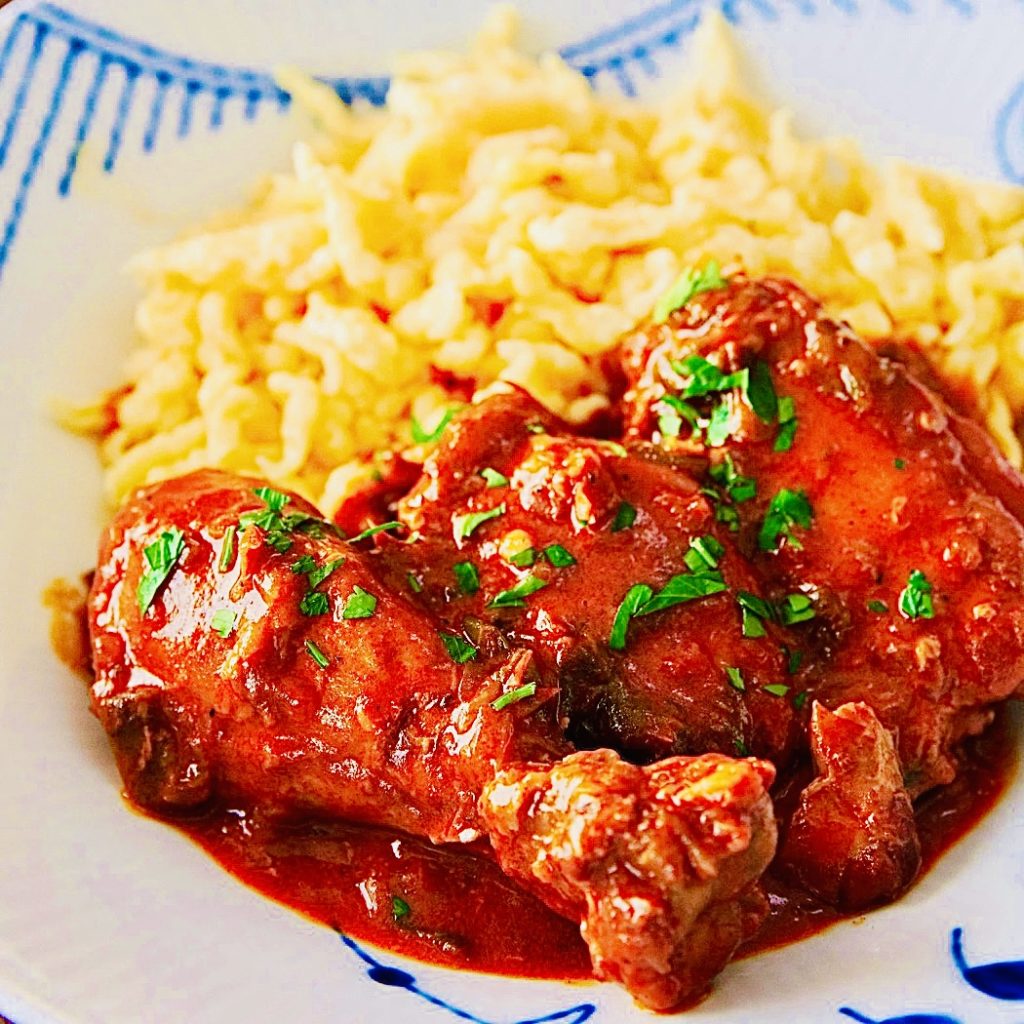 () Citizens – as the week closes out and the pandemic rages unabated in my city, state and country as it does through most of the world, the cold, the dark and the fear can close in around you and make everything seem hopeless… …but Who is this, riding in from the East astride a…