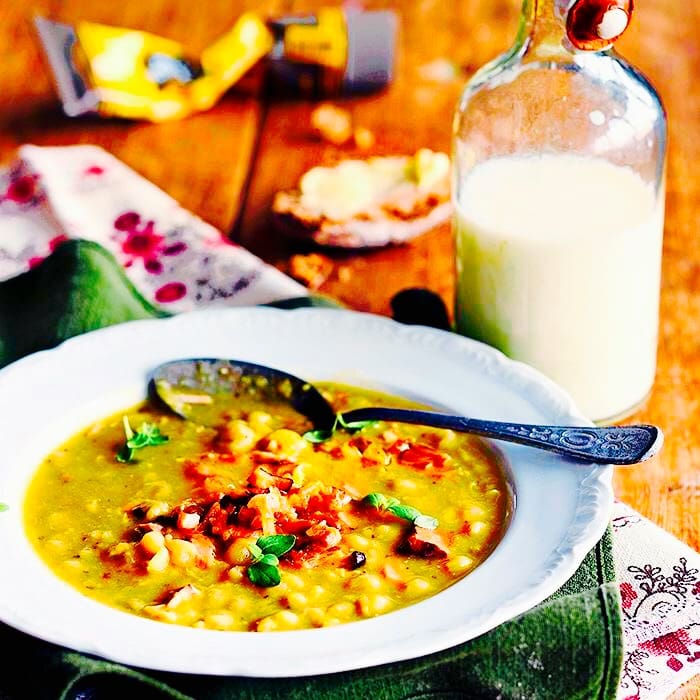 Citizens, every Thursday, Finns across the country (and many Scandinavians across the other Nordic countries) gather for a ritual of deep meaning – the ceremonial meal of pea soup with ham and pancakes with jam! As Finland was until 1809 part of the Swedish Realm, Sweden and Finland share many cultural traditions, including that of the pea soup (Swedish ärtsoppa; Finnish hernekeitto; Norwegian ertesuppe; Danish gule ærter).

In Sweden and Finland it is traditional to eat pea soup on Thursdays, served with pork and mustard, and pancakes for dessert, in Sweden sometimes accompanied by Swedish punsch as beverage.

In Finland the soup is made of green peas, whereas in Sweden and Denmark only yellow peas are used. The tradition of eating pea soup and pancakes on Thursdays is said to originate in the pre-Reformation era, as preparation for fasting on Friday.

Scandinavian pea soup is normally cooked with pork – although the meat may sometimes be served on the side – and a typical recipe would also include onions and herbs like thyme and marjoram. It is usually eaten with some mustard, often accompanied by crisp bread and often with the sweet liquor punsch (served hot).

Mustard is an important part of the dish, but the soup is served without it so that diners can stir it in to taste. The soup is then normally followed by pancakes with jam (strawberry, raspberry, blueberry, cloudberry or similar) which are regarded more as part of the meal than as a dessert.

In Denmark, pea soup (known as gule ærter) is not served with pancakes and the mustard is scooped up with rye bread on the side. In addition, the dish is sometimes served with medisterpølse, boiled potatoes and pickled beets and often turned into a feast, with copious amounts of beer and snaps on festive occasions.

The tradition of Thursday Hernekeitto in Finland is common in restaurants and households, and is an unpretentious but well-liked part of social life.

Swedish Prime Minister Per Albin Hansson (1885–1946) had a circle of friends, jokingly referred to as the “peralbinians” (peralbinerna), who for a number of years came to his home every Thursday to eat Hernekeitto, drink hot punsch and play bridge.

Hernekeitto with pancakes is, with few exceptions, served (either for lunch or dinner) every Thursday in the Swedish Armed Forces and the Finnish Defense Forces, a tradition dating back to World War II.

In Finland and Sweden, hernekeitto is a popular school food, since it is cheap and easy to prepare. In Denmark, gule ærter is often reserved for specific events, traditions or at larger gatherings and it is believed that the dish has a very long history.

It can be dated to 1766 in written sources, but might have originated as early as the Bronze Age, when dried peas and cabbage became popular vegetables for the long winters here.

My version of the classic Finnish recipe for Hernekeitto is quite traditional – as traditions stand firm against the erosion of time for good reason! 🙂 I also include a recipe for Pannukakku, the baked pancake of Finland!

It is a wonderful dish to prepare when you’re craving pancakes but don’t want to spend a lot of time slaving over a hot griddle. The Finns have a strong cultural identity – something true across the entire Nordic region, to be honest – and the Thursday tradition of enjoying pea soup knowing that everyone else was doing the same thing has been a strong contributor to the Finnish sense of shared responsibilities. Few things are more important – and delicious, and it is my sincerest of hopes you will try Hernekeitto for yourselves, my Citizens!