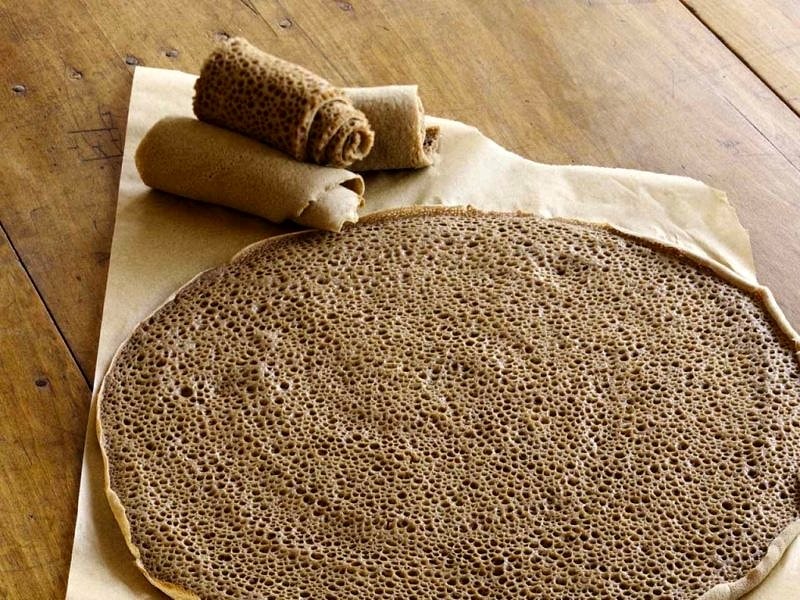 Citizens, Injera is an East African sourdough-risen flatbread with a unique, slightly spongy texture that TFD finds totally irresistible! Traditionally made out of T’eff (Anglicized as Teff) flour, it is a national dish in Ethiopia and Eritrea. Injera is a tasty ‘pancake’ that is actually used as a plate for Ethiopian food!

Unfortunately, creating an authentic recipe for this was not easy, as most recipes in English suggest using buckwheat flour. This is because buckwheat is the grain that most Ethiopians have used here in the States, since until very recently Teff was unavailable in the U.S. Many recipes, God help us, even suggest using pancake batter made from wheat flour!

The horror – well, not anymore!

You can now buy Teff here in America, so you have no excuse to try that pancake batter recipe garbage – you, my Citizens, can go for the real thing!

In Ethiopia, Injera is usually made from the tiny, iron-rich teff grain. However, teff production is limited to certain middle elevations and regions with adequate rainfall, so it is relatively expensive for the average household.

As many farmers in the Ethiopian highlands grow their own subsistence grains, wheat, barley, corn, and/or rice flour are sometimes used to replace some or all of the teff content. Teff flour is gluten-free, therefore Injera that’s made only with teff flour and water is gluten free and has higher demand. There are also different varieties of injera in Ethiopia, such as nech (white), kay (red), and sergegna (mixed).

In Eritrea and Ethiopia, injera is eaten daily in virtually every household. In making injera, teff flour is mixed with water and allowed to ferment for several days, as with sourdough starter. As a result of this process, injera has a mildly sour taste.

The injera is then ready to be baked into large, flat pancakes. This is done either on a specialized electric stove, or more commonly, on a clay plate (known as mittad (Amharic) or mogogo (Tigrinya)) placed over a fire.

Unusual for a yeast or sourdough bread, the dough has sufficient liquidity to be poured onto the baking surface, rather than rolled out. In terms of shape, injera compares to the French crêpe and the Indian dosa as a flatbread cooked in a circle and used as a base for other foods.

The taste and texture, however, are unlike the crêpe and dosa, and more similar to the South Indian appam. The bottom surface of the injera, which touches the heating surface, will have a relatively smooth texture, while the top will become porous. This porous structure allows the injera to be a good bread to scoop up sauces and dishes.

In Eritrea and Ethiopia, a variety of stews, or sometimes salads (during Ethiopian Orthodox fasting, for which believers abstain from most animal products) and simply more injera (called injera firfir), are placed upon the injera for serving.

Using one’s right hand, small pieces of injera are torn and used to grasp the stews and salads for eating. The injera under these stews soaks up the juices and flavours of the foods, and after the stews and salads are gone, this bread is also consumed. Injera is thus simultaneously food, eating utensil, and plate. When the entire “tablecloth” of injera is gone, the meal is over.

I have found that a mix of ivory and brown Teff flours plus a bit of sorghum flour best replicates the true Ethiopian sergegna injera flavor, color and texture. Note that this is also a fully gluten-free recipe, if you swing that way, Citizens!

vegetable oil, for the skillet

Mix ground teffs and sorghum flour with the water and let stand in a bowl covered with a dish towel at room temperature until it bubbles and has turned sour; This may take as long as 3 days, although I had success with an overnight fermentation; The fermenting mixture should be the consistency of a very thin pancake batter.

Stir in the salt, a little at a time, until you can barely detect its taste.

Lightly oil an 8 or 9 inch skillet (or a larger one if you like); Heat over medium heat.

Pour in enough batter to cover the bottom of the skillet. About ¼ cup will make a thin pancake covering the surface of an 8 inch skillet if you spread the batter around immediately by turning and rotating the skillet in the air (this is the classic French method for very thin crepe).

Cook briefly, until holes form in the injera and the edges lift from the pan; Do not let it brown, and don’t flip it over as it is only supposed to be cooked on one side.

Remove and let cool. Place plastic wrap or foil between successive pieces so they don’t stick together.

Add
3063shares
TFD uses cookies and we comply with GDPR so you control your personal info! If you continue on, we will assume you are happy with this, Citizen! OkNoRead more