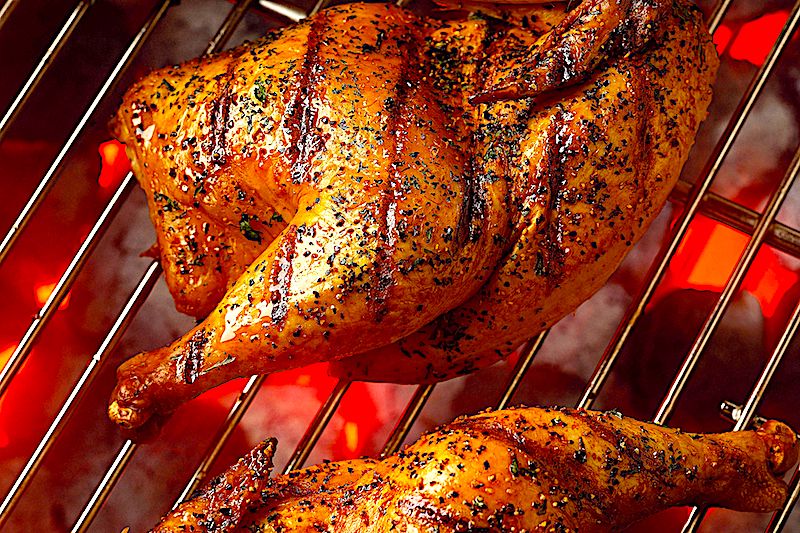 Citizens, the grilling season is now in full swing and what better meat to cook up over live fire than crowd-pleasing roast chicken?

This particular recipe comes with an Ivy League pedigree – straight from Cornell University, in fact! As noted in this comprehensive story from illinoistimes.com:

Certain foods have become intrinsically linked with state fairs throughout most of the nation. Salt water taffy. Snow cones. Cotton candy. Lemonade shakeups. Recently there’s been an influx of increasingly bizarre items that are deep-fried or on a stick – or both. Many are outrageously over-the-top, the heights of their caloric content only equaled by the depths of their nutritional value.

But there’s at least one exception. An iconic state food that’s both nutritious and delicious, it’s been an integral part of the New York State Fair, held in Syracuse, for more than 60 years. Much more than just a state fair treat, it’s had a major impact on American eating habits: Cornell Chicken.

Although it’s closely associated with the New York State Fair and Cornell University, Cornell chicken had its debut in Philadelphia in 1946, at a University of Pennsylvania dinner honoring Pennsylvania governor Edward Martin.

Dr. Bob Baker, a young professor of poultry science, was asked to come up with an unusual dish for the occasion. Baker’s research centered on finding ways to get people to eat more chicken. Strange though it seems today, until then chickens were raised commercially primarily for eggs. Fried chicken was a spring specialty, eaten when the young birds were tender.

In later months, larger chickens were roasted, baked or stewed; and only those larger chickens were considered flavorful enough to make chicken stock and salad. Chicken was a treat: Herbert Hoover’s campaign slogan promising “A Chicken in Every Pot” implied prosperity.

Baker’s idea was to develop a market for a chicken with a dressed weight of 2 ½ to 3 ½ lbs., which would increase poultry farmers’ turnover. And so was born the “broiler.”

Baker’s grilled chicken was a big hit at that university dinner. But it wasn’t until he joined the poultry sciences department at Cornell University in 1949, and his recipe and method appeared in a university publication, that it became famous as Cornell Chicken. Baker opened a stand, Baker’s Chicken Coop, at the New York State Fair to serve his special creation.

More than 60 years later, Cornell Chicken is still an integral part of the New York State Fair. Baker’s Chicken Coop is still in existence. Now run by Baker’s descendents who still use his original recipe and method, it serves as many as 5,000 chickens a day to hungry fairgoers.

Baker died in 2006, leaving behind a legacy not just of Cornell Chicken, but more than 40 other poultry innovations, including turkey ham, chicken and turkey hot dogs, and something that, as far as I’m concerned, is the evil twin of his wonderful grilled chicken innovation: chicken nuggets.

McDonald’s is usually credited (or blamed) for inventing chicken nuggets, but Baker published his unpatented recipe in an academic journal in the 1950s. McDonald’s patented theirs in 1979. I don’t know how much of McDonald’s version is based on Baker’s – but I suspect (and hope) not much!

Intrigued with the recipe and its history, I made it. But my family’s consensus was that while it was good, it certainly wasn’t anything special. Recently, however, after watching an episode about Cornell Chicken on PBS’s “Cook’s Country,” I gave it another try. This time the Cornell Chicken was scrumptious. I was hooked.

Using cider vinegar in the brine gave the chicken halves a tangy nuance down to the bone. Substituting fresh rosemary and sage (TFD NOTE: I also add thyme and chervil) for Baker’s original use of dried poultry seasoning was a flavor booster that still allowed the chicken’s flavor to shine through.

Baker’s original recipe also calls for beating an egg into the marinade. His reason for doing so was that it helped bind the ingredients together. But it doesn’t add any flavor, so Cook’s Country substituted Dijon mustard, which works equally well as a binder, and adds a tasty note to the marinade.

Most impressive, though, was Cook’s Country’s grilling method. Unless I’m grill/roasting a whole chicken beer can-style, I’ll use their innovation forevermore, whether it’s for grilled chicken with teriyaki or South East, Jamaican jerk or traditional American BBQ-sauced birds.

Grilling chickens so that the skin is browned and crisp has always been a challenge. In order to cook the chicken thoroughly, too often the skin becomes inedibly burnt. Baker’s method involves a custom-made grill whose grates are exactly 26 inches from the coals, something impossible for most backyard grills.

“Cook’s Country’s” innovation was to use a medium-low fire and, most importantly, put the chicken on the grill skin-side UP. If you’ve not grilled much chicken, that may not seem like a big deal. But almost all recipes/instructions call for starting the chicken skin-side down. Even if you’re using a fairly low fire, chances are that the skin will become unpleasantly charred before the meat itself is done.

The following recipe is an amalgam of Baker’s original recipe, “Cook’s Country’s” interpretation, and a few tips/innovations of my own. Citizens, this is an easy and fantastic way to cook chicken on the grill and I hope you will try it for yourselves!