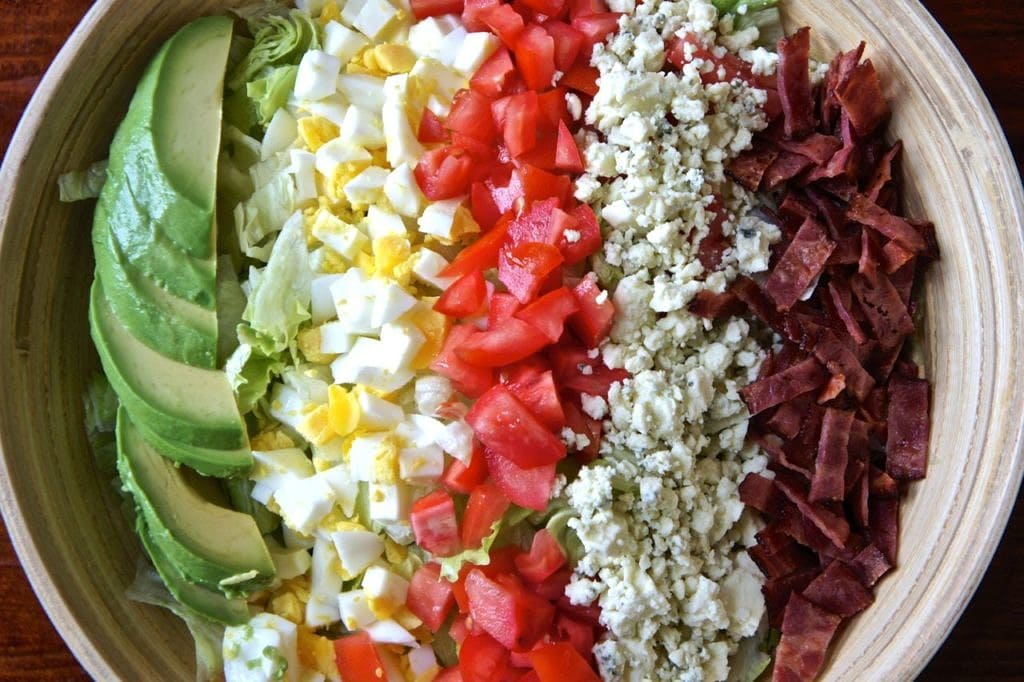 One way to remember the components is to use the mnemonic EAT COBB: Egg, Avocado, Tomato, Chicken, Onion, Bacon, Blue cheese – then add lettuce.

Ironically, one of the most famous dishes in American culinary history was actually created on the spur of the moment!

Cobb salad was supposedly created at the Brown Derby restaurant in Hollywood. One night in 1937, Bob Cobb, then owner of The Brown Derby, prowled hungrily in his restaurant’s kitchen for a snack.

Opening the huge refrigerator, he pulled out this and that: a head of lettuce, an avocado, some romaine, watercress, tomatoes, some cold breast of chicken, a hard-boiled egg, chives, cheese and some old-fashioned French dressing. He started chopping. Added some crisp bacon — swiped from a busy chef.

The Cobb salad was born. It was so good, Sid Grauman (Grauman’s Chinese Theatre), who was with Cobb that midnight, asked the next day for a ‘Cobb Salad.’ It was so good that it was put on the menu.

Cobb’s midnight invention became an overnight sensation with Derby customers, people like movie mogul Jack Warner, who regularly dispatched his chauffeur to pick up a carton.

There’s also a legend about how the Brown Derby got its name: One night, Herbert Somborn, an ex-husband of Gloria Swanson, remarked — speaking of the mood of Hollywood in the roaring 20s — that “You could open a restaurant in an alley and call it anything. If the food and service were good, the patrons would just come flocking. It could be called something as ridiculous as the Brown Derby.” Hence, a restaurant shaped like a hat opened near Hollywood and Vine in 1926.

Citizens, my version does indeed use chopped olives – feel free to leave them out if you so prefer. I also prefer using frisée greens instead of the classic endive. The dressing I have included is the original recipe from The Brown Derby itself!