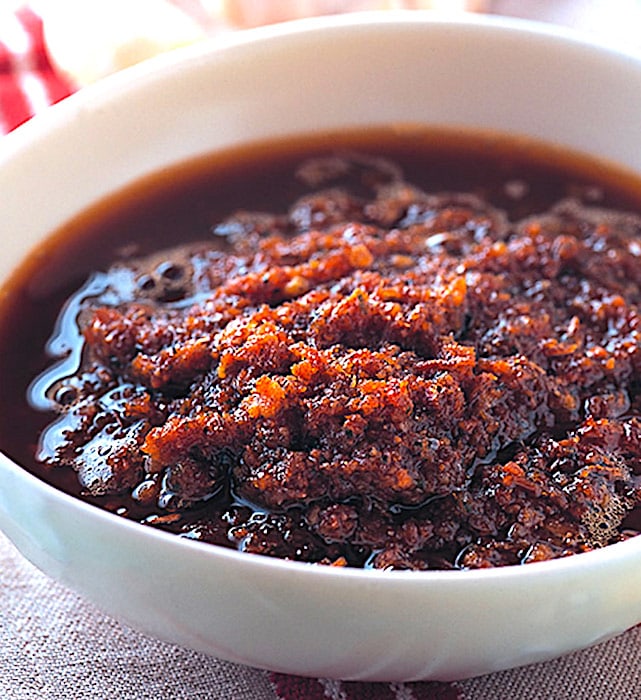 Citizens, despite its name, Sha Cha Jiang is nothing like a Western BBQ sauce: it’s actually an Umami bomb utilizing a range of dried seafood, chili, garlic, nuts and spices that adds an incredibly deep flavor to stir-fries throughout China and Taiwan.

Some present the theory that it was brought to China from Malaysia by the Chinese traders who lived there, and it does indeed have many classic hallmarks and ingredients of a good satay sauce from that region!

Robert Matthews on feedmethat.com has this to say about the etymology and usage of the sauce:

Sha Cha Jiang and Satay are one and the same thing. “Satay” is the Southern Min (Xiamen, Chaozhou and Taiwan dialect all belong to the Southern Min group of Chinese dialects) pronunciation of Mandarin “Sha Cha”, Jiang just means sauce.

Cha means tea in Mandarin; the English word TEA is in fact an anglicization of the Southern Min word TE – it sounds perfect if you say it in Spanish. Many Chinese people have no idea of how to romanize systematically: Sha Zha Chiang is a hodgepodge spelling which should be ignored.

Satay sauce is often used in Southeast Chinese cooking and in Southeast Asia, where there are many immigrants from SE China. One tasty way to use it is as a dip for Huoguo (“firepot”), where guests sit around a sort of samovar and dip vegetables, meat and fish into the boiling water to cook. After removing the cooked food, it is often dipped into a bowl containing satay sauce and perhaps an egg. At the end of the meal, everybody gets to share the delicious broth.

I found an excellent recipe online for this sauce and have modified it to suit my personal tastes – try stir-frying some green beans with this fantastic condiment. It has endless culinary applications and keeps a very long time in the fridge. I also specify quail eggs instead of chicken eggs as they do not carry salmonella.