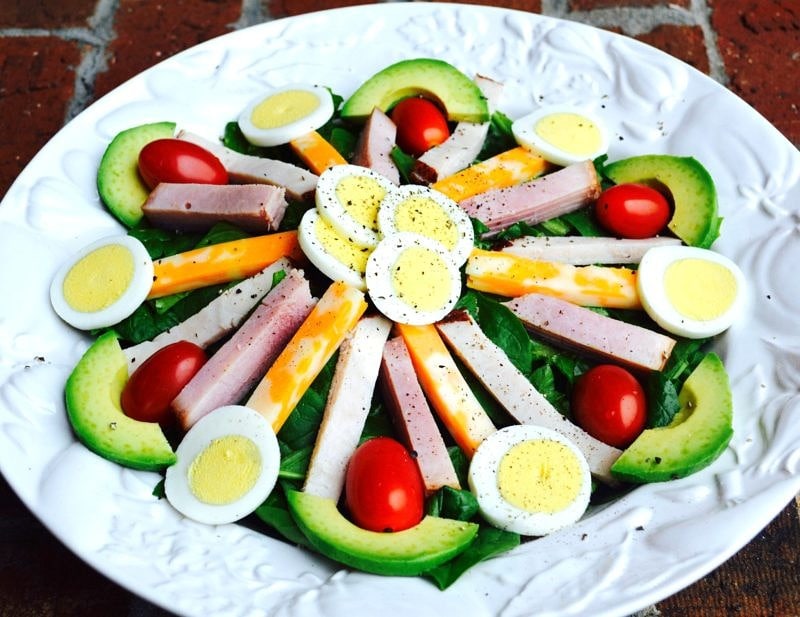 Citizens, Chef salad (or chef’s salad) is an American salad consisting of hard-boiled eggs; one or more varieties of meat, such as ham, turkey, chicken, or roast beef; tomatoes; cucumbers; and cheese; all placed upon a bed of tossed lettuce or other leaf vegetables. Several early recipes also include anchovies. A variety of dressings are used with this salad, but Thousand Island is considered canonical.

Food historians do not agree on the history and composition of chef salad, much less who assembled the first one. Some trace this salad’s roots to Salmagundi, a popular meat and salad dish originating in 17th century England and popular in colonial America.

Others contend chef’s salad is a product of the early twentieth century, originating in either New York or California. The person most often connected with the history of this salad is Louis Diat, chef of the Ritz-Carlton in New York City during the 1940s.

While food historians acknowledge his recipe, they do not appear to be convinced he originated the dish, which is more popularly attributed to either chef Victor Seydoux at the Hotel Buffalo, a Statler Hotel in Buffalo, New York or chef Jacques Roser at the Hotel Pennsylvania in New York City.

Roser worked in various culinary positions in Paris before being invited to become head chef at the prestigious 1920s Hotel Pennsylvania, where he worked for more than fifteen years. Seydoux first learned his craft in Montreux, Switzerland, and continued his studies in France and England before coming to work in the United States.

Seydoux’s first experiences in the U.S. included positions at the Waldorf-Astoria Hotel and the Ritz-Carlton. Although the origin of the salad is not generally known, as reported by Alice Rose Seydoux, widow of Victor, the salad was officially launched at the Hotel Buffalo.

When the customers started requesting the off-menu salad made with cuts of meat, cheese and hard boiled eggs, the hotel decided to add it to the menu. Giving chef Seydoux the honor of naming the salad he is purported to have said “Well, it’s really a chef’s salad.”

The chef salad probably owes much of its popularity, according to Evan Jones in American Food: The Gastronomic Story (1975), to Louis Diat, chef at the Ritz-Carlton.

Cooking a la Ritz includes Diat’s recipe: “Chef’s salad. Place separately in a salad bowl equal amonts of chopped lettuce (place on the bottom of the bowl), boiled chicken, smoked ox tongue and smoked ham, all cut in julienne style. Add ½ hard-cooked egg for each portion. Place some watercress in the center and serve with French Dressing.”

Diat did not invent the salad (older recipes exist), but its inclusion on the menu at the Ritz-Carlton would have introduced the salad to more of the public. It’s possible that the inclusion of Thousand Island dressing is also linked to the Ritz, since the hotel also introduced the dressing to New York.

The 1936 2nd printing of The Joy of Cooking is the first known printed recipe for a traditional “Chef Salad” and cites most of the ingredients found in later Chef Salad recipes.

Citizens, my version of the classic recipe is spot-on delicious and includes the classic but usually left-out anchovy as well as some cooked duck and avocado. Feel free to omit if you so prefer. I also like the zip added by using horseradish cheddar – feel free to use regular cheddar if you don’t dig the spicy as TFD does.

4 ounces cooked thick-sliced duck breast, julienne cut (substitute chicken, if you must, but the duck is much tastier)

16 ounces salad dressing (your choice, but I personally can’t imagine anything other than the Hirshon Thousand Island Dressing)

Add 1-ounce each of ham, duck (or chicken, if using), turkey, roast beef, cheddar cheese, Swiss cheese, and Provolone. Place the quarters of hard-boiled egg around each salad bowl.

Garnish with the black olives, 2 anchovies per bowl (if using), cucumber, tomatoes, chives and avocado slices. Allow those enjoying the Chef’s Salad to add their choice of salad dressings, as long as it’s Thousand Island.

Add
1759shares
TFD uses cookies and we comply with GDPR so you control your personal info! If you continue on, we will assume you are happy with this, Citizen! OkNoRead more