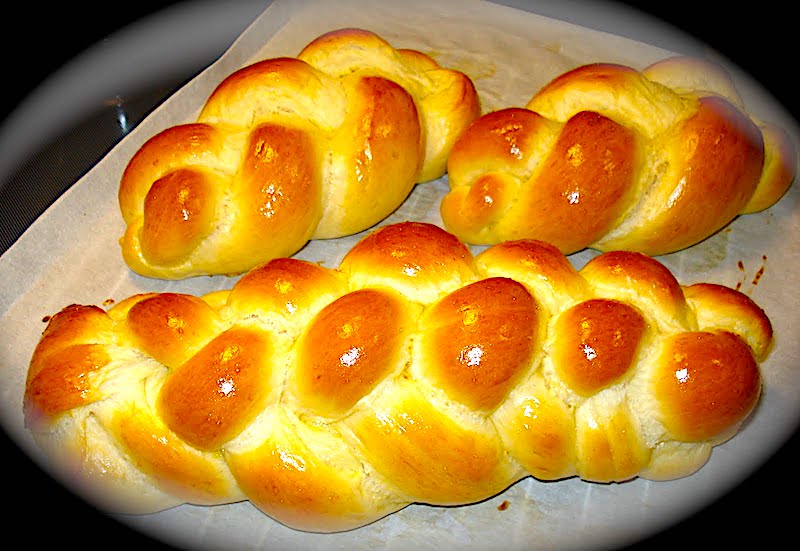 Citizens, there is a certain twisted logic in posting this recipe today – it is the day before Passover, when all leavened products are removed from Jewish homes and Challah is replaced by Matzo. That said, I would be totally remiss in my duties as Lord High Dictator in not including this recipe during Holy Bread week!

Challah is a special Jewish ceremonial bread (typically braided in simple to elaborate patterns), from which a small portion has been set aside as an offering and eaten on Sabbath and Jewish holidays. Surprisingly, the name for the bread actually comes from the offering!

The name challah comes from the biblical requirement, hafrashat challah—separating challah. Read all about this at chabad.org.

The halachic definition of challah entails separating a section of dough from your kneading and giving it to a kohen (a priest). This piece of dough is called “challah.” Any dough which is made of wheat, barley, spelt, oat or rye is obligated in this mitzvah. The kohen and his family would eat the challah while in a state of ritual purity. The rabbis decided that a home baker should give 1/24th of the dough to the kohen, while a commercial baker has to donate 1/48th of his dough.

Eventually, the soft, sweet bread loaves customarily eaten by the Shabbat meals became known as challah (not “hally,” as is the popular mispronunciation).

To learn how to braid the classic 6-strand Challah, watch this video:

For an easier 2-strand Challah, try this:

After the first rising, the dough is rolled into rope-shaped pieces which are braided, though local (hands in Lithuania, fish or hands in Tunisia) and seasonal (round, sometimes with a bird’s head in the center) varieties also exist.

Israeli challah contains eggs or olive oil in the dough as well as water, sugar, yeast, salt, honey and raisins and is topped with sesame. Poppy or sesame (Ashkenazi) and anise or sesame (Sephardic) seeds may be added to the dough or sprinkled on top. Both egg and water challah are usually brushed with an egg wash before baking to add a golden sheen.

Challah is usually parve (containing neither dairy nor meat—important in the laws of Kashrut), unlike brioche and other enriched European breads, which contain butter or milk.

According to Jewish tradition, the three Sabbath meals (Friday night, Saturday lunch, and Saturday late afternoon) and two holiday meals (one at night and lunch the following day) each begin with two complete loaves of bread. This “double loaf” (in Hebrew: lechem mishneh) commemorates the manna that fell from the heavens when the Israelites wandered in the desert for forty years after the Exodus from Egypt according to Jewish religious belief.

The manna did not fall on Sabbath or holidays; instead, a double portion would fall the day before the holiday or sabbath. Each single loaf is sometimes woven with six strands. Other numbers of strands commonly used are three, five and seven. Occasionally twelve are used, referred to as a “Twelve Tribes” challah.

Before the bread is blessed, it is first covered with a cloth covering during the blessing of the wine. It is customary to use a dedicated cloth called a challah cover for this purpose, although any improvised cover is acceptable.

It is customary to begin the Friday night Sabbath meal and the two meals eaten during Sabbath with a blessing over two challot. After kiddush over a cup of wine, the head of the household recites the blessing over bread: “Baruch atah Adonai, eloheinu melech ha’olam, hamotzi lechem min ha’aretz” (Translation: “Blessed are you, LORD, King of the Universe, who brings forth bread from the earth”).

According to Jewish law and practice, salting challah is a critical component of HaMotzi, the blessing over bread. Salt has always played an indispensable role in Jewish life and ritual dating back to the biblical period of ancient Israel. With high quantities located in the Dead Sea region of the historical land of the Jewish people, salt was considered the most essential and common of all elements.

In the Torah, salt symbolizes the eternal covenant with God. As a preservative, the mineral never spoils or decays, signifying the immortality of this bond. Moreover, adding taste to food, salt represents a covenant with God that has meaning and flavor.

The world is one part wilderness, one part settled land, and one part sea. Said the sea to G-d: “Master of the Universe! The Torah will be given in the wilderness; the Holy Temple will be built on settled land; and what about me?” Said G-d: “The people of Israel will offer your salt upon the Altar.”

Rabbi Zalman Schachter-Shalomi interpreted this story as such: “The wine is like the wilderness—fermentation requires wild, airborne yeast. The bread is like the settled land—bread is created through cultivation and human intervention. Salt is like the ocean—the sea, where life began and purity begins.” These are the three realms of the world and are framework of what unifies the altar within the Jewish home. Thus through the Sabbath blessing over wine and Challah, the covenant with God is manifested.

The following Challah tips are invaluable and are cribbed from the Empire Foods website:

I now do this spooning technique with all my dry ingredients and have no trouble getting a light flaky texture.

Of course, too much flour also implies not enough liquid so you may wish to increase the amount of liquid. I suggest spooning the flour. It is easier and more accurate.

Another possible problem is the rising temperature. A trick is to place a warm tea towel over the dough while it is rising and put the covered bowl in a warm place. I will often use my oven for this. DO NOT TURN THE OVEN ON! Merely place the covered bowl of dough into the oven with the oven light on. This is a protected area where no draft can reach the rising dough.

The oven light adds just enough heat to cause the dough to rise. Another method is to mix the dough in your bread maker on the dough setting. Take out the dough, braid the challah let rise again and bake. The bread machines heats the surrounding temperature very precisely.

When mixing the water and yeast together, make sure that the water is lukewarm. Cold water will not allow the yeast to rise to its full potential, and you will get denser flatter challah.

Too little sugar will also cause heavy dense loaves. The sugar reacts with the yeast so be sure to measure your sugar accurately.

Lastly, make sure that the yeast you are using is fresh. This is very important. Older or expired yeast may result in a denser flatter bread. Unused yeast should be kept in the fridge.

Note: The average foil package of yeast is ¼ ounce. This works out to be 2 ¼ tsp.

6/21/21 tips update – these are also very helpful, from a professional Swiss baker:

For the smoothest dough with the best texture, make a pre-fermentation dough.

Arrigoni assembles a “poolish” the night before making her challah, made of 20% of the total flour used in her recipe (she uses spelt flour), an equal amount of water and a few grains of yeast. The following day, the bubbly poolish, which should have doubled in size, is mixed with the challah ingredients. The poolish made with spelt gives you a dough that is super smooth, easy to work with and that stretches without tearing.

For a perfect challah with a smooth texture, Arrigoni chills her dough. The ideal dough temperature after kneading, she says, is between 74-77 degrees F. Use cold ingredients if necessary so as not to exceed this temperature.

Don’t let the dough rise for too long before shaping.

Before braiding, weigh each strand to the exact gram.

All of the strands should weigh and be shaped exactly the same.

She is Swiss, you know! You don’t want to practice on the actual dough because “on the living object, you only have one chance!”

Flour your strands before baking.

To prevent the strands from melting into each other when baking, very lightly flour the finished, shaped strands before braiding.

Citizens, my version of this recipe is based very closely on a very rich and delicious recipe I found on a British website – I added the ginger to the yeast proof, tweaked the directions and added the directions for braiding. It does call for one very British ingredient – Lyle’s Golden Syrup, which is carried in some supermarkets or on Amazon here. I have also – as of December 3, 2018 – modified the original recipe to include the “tangzhong” method of bread baking! Learn more about it here.

Citizens, Challah is well worth adding to your bread recipe repertoire – it makes the best French Toast and Bread Pudding you’ll ever taste and is fantastic for sandwiches!