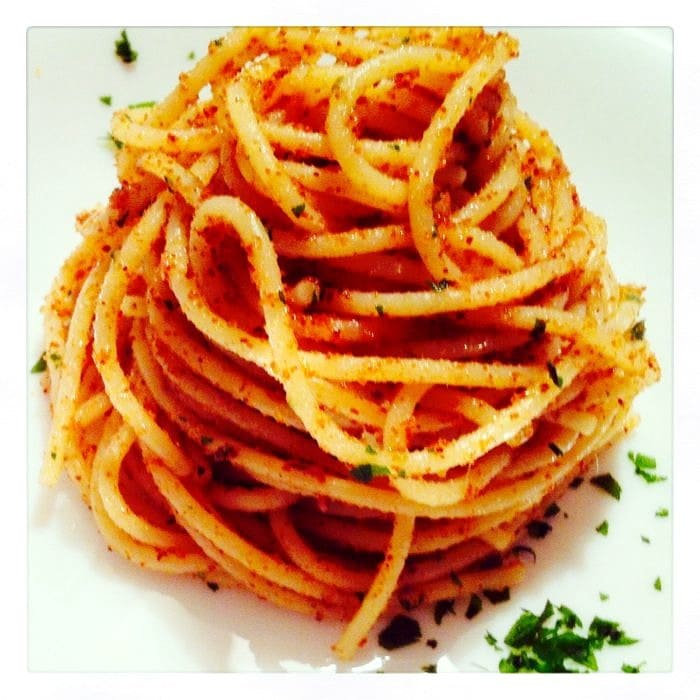 Citizens, the Italian composer Ruggero Leoncavallo (who wrote “I Pagliacci” among other operas) was very partial to this dish. It is traditionally eaten on Christmas Eve in Calabria.

As noted on the site academiabarilla.com:

“Pasta with breadcrumbs is a widespread preparation in Southern Italy and was probably created by the lower class who could not afford other ingredients.

They would prepare the breadcrumbs using the leftover bread from the days before and, when possible, add two other ingredients that were typical of home cooking at the time: salted anchovies and dried chili peppers.

Over time in the region of Calabria, people began to prepare this dish on Christmas Eve when, according to tradition, one shouldn’t eat meat.

Usually, this recipe is prepared with long, dried pasta noodles. Dried pasta arrived in Southern Italy via Sicily, where it was introduced by the Arabs. In the 12th century, the first pasta factory in Europe was built in Palermo and Sicily quickly became the center of pasta production in the Mediterranean.”

Citizens, this is a uniquely savory, spicy and delicious pasta recipe that goes beyond the norm – you simply must sample it at your earliest convenience! 🙂