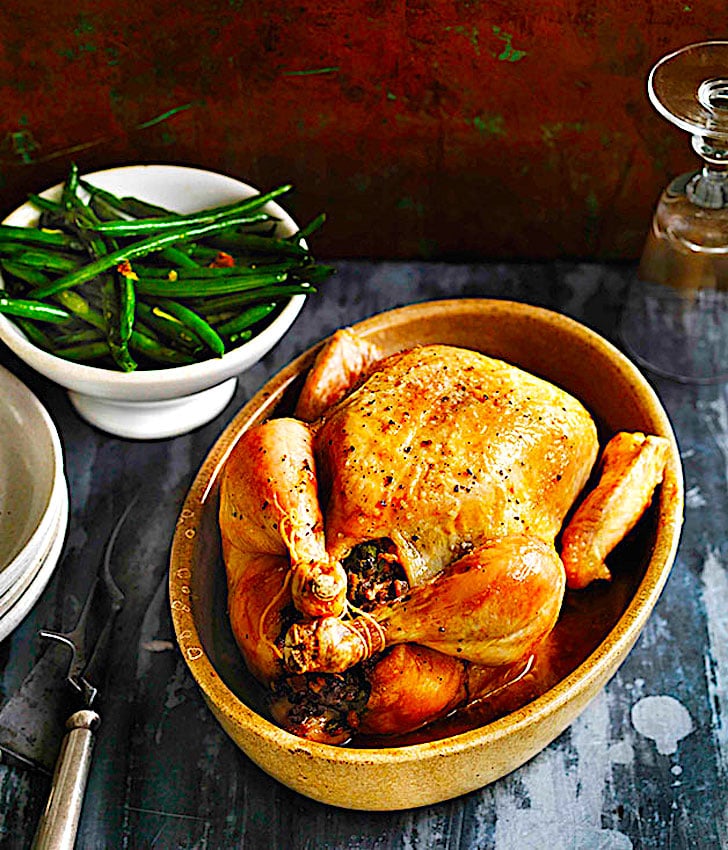 Citizens, behold a truly unique recipe indeed, one that is redolent of all things wonderful! 🙂

Calabria is the birthplace of many of Italy’s finest butchers, and its cured pork products are well known. Positioned as it is on the toe of Italy’s boot, though, Calabria also has a rich tradition of maritime cuisine.

Here, in an unusual dish called gadduzzu all’acqua ‘I mari, a specialty of Vibo Valentia, the sea itself becomes an ingredient: traditionally, sea water is used to baste the chicken, but you can substitute a tablespoon of sea salt dissolved in 200ml of water.

Either way, the brine keeps the chicken tender and juicy while seasoning it at the same time.

Calabria is one of the oldest regions of Italy with the first evidence of human presence in the region dating as far back as 700,000 years BC. Around 3,500 BC, the first villages in Calabria were settled. By the eighth century BC, the Greeks had control over the region and, in the second century BC, Calabria was conquered by the Romans.

After the fall of the Roman Empire the region was conquered by the Goths, the Byzantines and later the Longobards. It wouldn’t be until 1860 that Calabria would consolidate and became part of the larger region of Italy.

Calabria’s economy is based mainly on agriculture. Chief agricultural products include olive oil, onions, mushrooms, wheat and other cereal grains, wine, eggplant, figs, chestnuts and citrus fruit. Calabria is the largest producer of bergamot oranges in Italy. The rinds of bergamot oranges are used to manufacture perfumes, teas, and other aromatic creations. Despite its small size and low population, Calabria is responsible for producing a third of all the olive oil produced in Italy.

Most of the cuisine of Calabria is heavily influenced by the Mediterranean and is often spicy. Pasta dishes with peppers, onions and sausage sauteed with or without sauce are very common. Frittatas made with pasta and sausage are also prevalent. Eggplant is a favorite dish in the region and is served in a variety of ways.

Due to the humid climate and the high risk of rapid molding and spoilage, food preservation is important. Oiling, salting, curing and smoking – almost all of the area’s food products can be found preserved in some form or another. Calabria’s many varieties of cured meats and sausages are served alongside fresh produce. The local pancetta pairs perfectly with summer melons.

A brined chicken is a juicy chicken, and this recipe is definitely juicy and immensely flavorful. The flavor profile is quite unique but one that I am confident you will enjoy.

Citizens, I have spiced up the original recipe with the addition of a minced Calabrian chili – you can leave it out if you so prefer or want a milder dish.