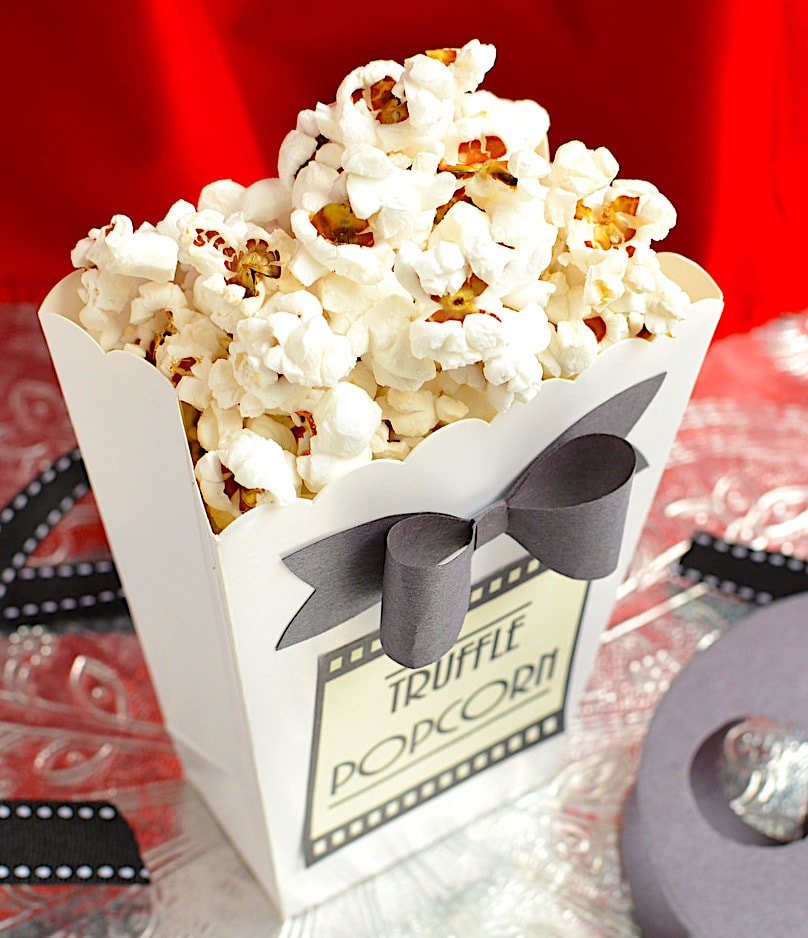 My Citizens! It is by now a foregone conclusion that I – the gilded sybarite that is TFD! – am extremely fond of the finer things in gastronomic life. Not the least of which are both black and white truffles, especially when mated with humble popcorn! 😀

Popcorn, of course, is a variety of corn kernel which forcefully expands and puffs up when heated.

A popcorn kernel’s strong hull contains the seed’s hard, starchy endosperm with 14-20% moisture, which turns to steam as the kernel is heated. The pressure continues building until it exceeds the hull’s ability to contain it. The kernel ruptures and forcefully expands, allowing the contents to expand, cool, and finally set in a popcorn puff 20 to 50 times the size of the original kernel.

Corn was first domesticated 9,000 years ago in what is now Mexico. Archaeologists discovered that people have known about popcorn for thousands of years. In Mexico, for example, remnants of popcorn have been found that date to around 3600 BC.

Popping of the kernels was achieved by hand on the stovetop through the 19th century. Kernels were sold on the East Coast of the United States under names such as Pearls or Nonpareil. The term popped corn first appeared in John Russell Bartlett’s 1848 Dictionary of Americanisms. Popcorn is an ingredient in Cracker Jack, and in the early years of the product, it was popped by hand.

Popcorn’s accessibility increased rapidly in the 1890s with Charles Cretors’ invention of the popcorn maker. Cretors, a Chicago candy store owner, created a number of steam powered machines for roasting nuts, and applied the technology to the corn kernels. By the turn of the century, Cretors had created and deployed street carts equipped with steam powered popcorn makers.

During the Great Depression, popcorn was fairly inexpensive at 5–10 cents a bag and became popular. Thus, while other businesses failed, the popcorn business thrived and became a source of income for many struggling farmers, including the Redenbacher family, namesake of the famous popcorn brand.

During World War II, sugar rations diminished candy production, and Americans compensated by eating three times as much popcorn as they had before. The snack was popular at theaters, much to the initial displeasure of many of the theater owners, who thought it distracted from the films. Their minds eventually changed, however, and in 1938 a Midwestern theater owner named Glen W. Dickson installed popcorn machines in the lobbies of his theaters. The venture was a financial success, and the trend soon spread.

In 1970, Orville Redenbacher’s namesake brand of popcorn was launched. In 1981, General Mills received the first patent for a microwave popcorn bag, with popcorn consumption seeing a sharp increase by tens of thousands of pounds in the years following.

At least six localities (all in the Midwestern United States) claim to be the “Popcorn Capital of the World;”: Ridgway, Illinois; Valparaiso, Indiana; Van Buren, Indiana; Schaller, Iowa; Marion, Ohio; and North Loup, Nebraska. According to the USDA, corn used for popcorn production is specifically planted for this purpose; most is grown in Nebraska and Indiana, with increasing area in Texas. As the result of an elementary school project, popcorn became the official state snack food of Illinois.

Citizens, I truly gild the lily with this recipe using both black AND white truffles for a decadent take on popcorn I have every confidence will become your new favorite! 🙂 The tiny pinch of the pungent Indian spice asafœtida really helps accentuate the garlic-like aroma of the white truffle butter and the black truffle cheese!

The spicy Calabrian sea salt can be ordered here.

The white truffle butter and duck fat can be ordered from D’Artagnan here.

The black truffle cheese is usually available at Whole Foods or can be ordered from here.