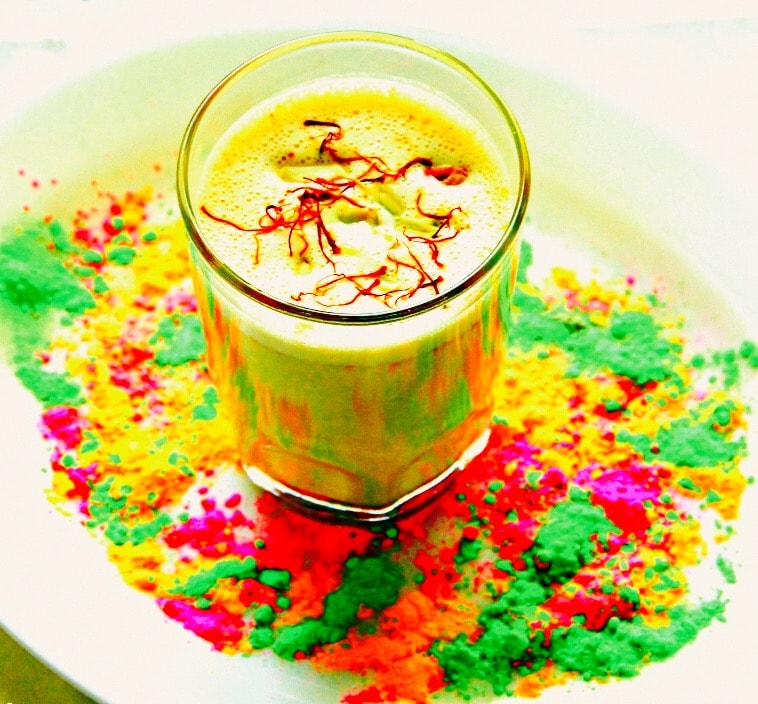 Citizens, be advised that this recipe brings “intoxicating” to a whole new level.

It has marijuana in it. A LOT OF MARIJUANA.

Before I lose you, know that bhang thandai is presented in celebration of Holi (pronunciation: /ˈhoʊliː/; Sanskrit: होली Holī) known as the festival of colors or the festival of sharing love.

A ceremonial drink shared amongst millions of Hindus in India, Nepal and elsewhere during Holi, thandai has enough marijuana in it to turn a rampaging bull elephant into a mewling kitten with an epic case of the munchies.

Please note that TFD is in no way endorsing recreational marijuana usage in states or countries where it is an illegal controlled substance! This recipe is presented in the spirit of learning about and appreciating new cultures – you choose to make this at your own risk!!!

I do also offer a completely MJ-free version of the recipe should you wish to try it without guilt or legal issues. 🙂

With all that out of the way: Holi is celebrated at the approach of the vernal equinox, on the Phalguna Purnima (Full Moon). The festival date varies every year, per the Hindu calendar, and typically comes in March, sometimes February in the Gregorian Calendar.

The festival signifies the victory of good over evil, the arrival of spring, end of winter, and for many a festive day to meet others, play and laugh, forget and forgive, and repair broken relationships, and is also celebrated as a thanksgiving for a good harvest.

It is an ancient Hindu religious festival which has become popular with non-Hindus in many parts of South Asia, as well as people of other communities outside Asia.

It is primarily observed in India, Nepal, and other regions of the world with significant populations of Hindus or people of Indian origin. In recent years the festival has spread to parts of Europe and North America as a spring celebration of love, frolic, and colours.

Holi celebrations start on the night before Holi with a Holika bonfire where people gather, sing, dance and party.

The next morning is a free-for-all carnival of colors, where participants play, chase and color each other with dry powder and colored water, with some carrying water guns and colored water-filled balloons for their water fight.

Anyone and everyone is fair game, friend or stranger, rich or poor, man or woman, children and elders. The frolic and fight with colors occurs in the open streets, open parks, outside temples and buildings.

Groups carry drums and other musical instruments, go from place to place, sing and dance. People visit family, friends and foes to throw colored powders on each other, laugh and gossip, then share Holi delicacies, food and drinks.

Many of these drinks are intoxicating. For example, Bhang (Hindi: भांग) is a preparation of cannabis (aka Marijuana) traditionally used in food and drink in the Indian subcontinent. It is mixed into drinks and sweets and consumed by millions during holidays.

To make thandai, a mortar and pestle is used to grind the buds and leaves of cannabis into a bhang paste. To this mixture, milk, ghee and spices are then added.

The bhang base is now ready to be made into a heavy drink, thandai, an alternative to alcohol; this is often referred to casually, if inaccurately, as a “bhang thandai” and “bhang lassi”.

Whether you choose to observe Holi or not, do try my “virgin” version of the drink as it is delicious anytime! It may be intoxicating, but it is a holy intoxication to those who assiduously practice their beliefs – I hope you see fit to try thandai if it is legal for you to do so! I would personally enjoy this with some delicious palak paneer!

TFD currently has a total of 1,363 posts and 1,159,134 words written since December of 2014! Add your voice to My 50,000+ dedicated readers, comment on My recipes and thus become an active member of TFD Nation! Looking for a particular recipe? Search for it in the box above or via the category tags below - there are THOUSANDS of the finest in world and historic recipes here!