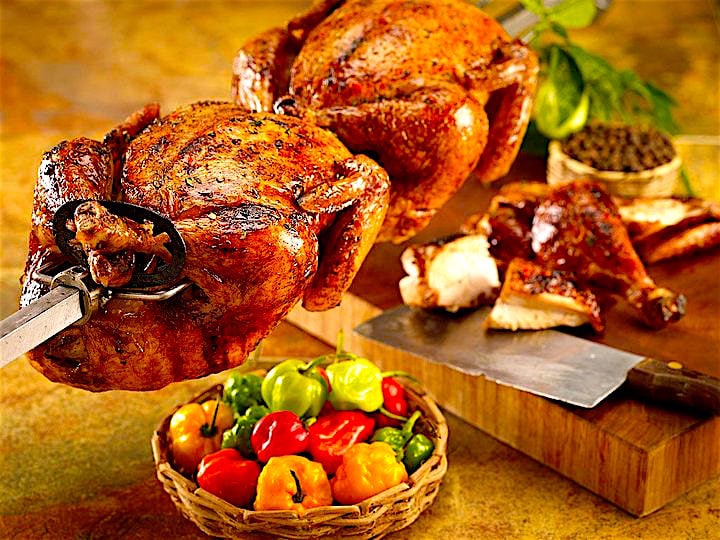 Citizens, you are probably familiar with the spicy awesomeness that is Jamaican jerk chicken – but did you know there are different versions found throughout the Caribbean? To highlight the diversity of this magnificent dish, I have chosen to share the Belizean version from the beautiful Central American country of Belize!

Belize is a country on the eastern coast of Central America. It is the only country in Central America whose official language is English, though Belizean Creole (Kriol) and Spanish are also commonly spoken. Belize is bordered on the north by Mexico, on the south and west by Guatemala, and on the east by the Caribbean Sea. Its mainland is about 290 km (180 mi) long and 110 km (68 mi) wide.

Belize’s abundance of terrestrial and marine species and its diversity of ecosystems give it a key place in the globally significant Mesoamerican Biological Corridor.Belize has a diverse society, composed of many cultures and languages that reflect its rich history.

Belize is best known for its September Celebrations, its extensive coral reefs and amazing diving areas and punta music.

The Maya civilization spread across what is now Belize around 1500 BC, and flourished there until about 900 AD. The recorded history of the middle and southern Belizean regions is dominated by Caracol, an urban political centre that may have supported over 140,000 people. North of the Maya Mountains, the most important political centre was Lamanai. In the late Classic Era of Maya civilization tion (600–1000 AD), as many as 1 million people may have lived in the area that is now Belize.

Spanish conquistadors explored the land and declared it a Spanish colony but chose not to settle because of its lack of resources like gold and the strong defence of the Yucatán by the Mayans. English and Scottish settlers and pirates known as the Baymen entered the area in the 17th and 18th centuries respectively and established a logwood trade colony, slave economy and port in what became the Belize District.

In 1836, after the emancipation of Central America from Spanish rule, the British claimed the right to administer the region. In 1862, Great Britain formally declared it a British Crown Colony, subordinate to Jamaica, and named it British Honduras. Belize was granted independence from Great Britain on September 21, 1981.

Belizean cuisine is an amalgamation of all ethnicities in the nation, and their respectively wide variety of foods. It might best be described as both similar to Mexican/Central American cuisine and Jamaican/Anglo-Caribbean cuisine.

Asian ingredients such as soy sauce have also found their way into the cuisine. In 2010, the Republic of China on Taiwan Mission along with the Government of Belize launched a Soy Sauce Project in Orange Walk Town. A few months after, the project was extended to the Corozal District with the aim of improving income to families. Each district had the participation of ten women’s groups who learned step by step the creation of Belizean Soy Sauce.

Citizens, this Belizean recipe includes fruits, herbs and citrus as well as a good dose of heat and umami! I’ve also upped the flavor ante by using allspice and fruitwood chips soaked in fresh orange juice to flavor the smoke as the chicken cooks to perfection! Bring out a cold beer, fire up a grill on a hot Summer day and try this chicken for the ages for yourselves!

() My glorious Citizens of TFD Nation! Attend and pay heed as the Swami of Sandwiches, the Viceroy of Vietnamese Cuisine – YOUR TFD! – has at last gathered all the elements together to create the Philosopher’s Stone of Transmutative Alchemy, enabling Me to share the steps to creating the ultimate bánh mì sandwich! As…