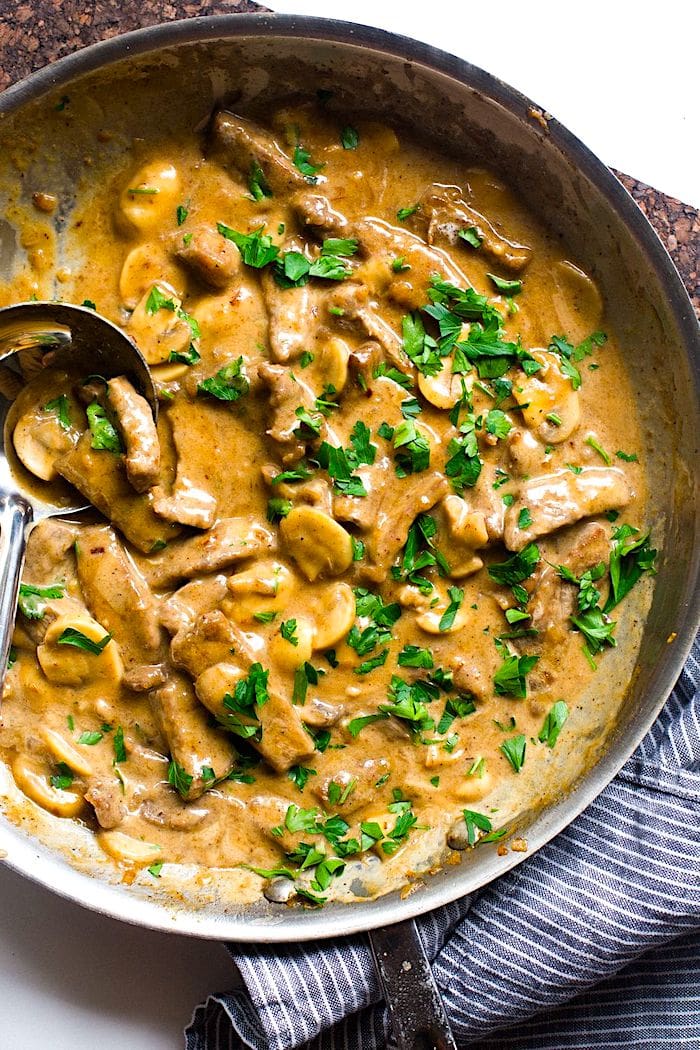 Citizens, behold this classic recipe of Russian cuisine that has become synonymous with opulence and grand living – and deservedly so!

Beef Stroganoff (in Russian: Бефстроганов Befstróganov) is a luxurious dish made famous by the Russian Czars, consisting of sautéed pieces of the finest beef served in an unctuous sauce based on smetana (sour cream) and the most decadent mushrooms.

Beef Stroganoff or beef Stroganov (Russian: бефстроганов befstróganov) is a Russian dish of sautéed pieces of beef served in a sauce with smetana (sour cream). From its origins in mid-19th-century Russia, it has become popular around the world, with considerable variation from the original recipe.

The dish is named after one of the members of the influential Stroganov family, and its invention has been commonly attributed to French chefs working for the family.

The recipe involves lightly floured beef cubes (not strips) sautéed, sauced with prepared mustard and broth, and finished with a small amount of sour cream: no onions, no mushrooms and no alcohol. A competition purported to have taken place in 1890 is sometimes mentioned in the dish’s history, but both the recipe and the name existed before then.

Another recipe, this one from 1909, adds onions and tomato sauce, and serves it with crisp potato straws, which are considered the traditional side dish for beef Stroganoff in Russia. The version given in the 1938 Larousse Gastronomique includes beef strips, and onions, with either mustard or tomato paste optional.

After the fall of Tsarist Russia, Beef Stroganoff was popularly served in the hotels and restaurants of China before the start of World War II. Russian and Chinese immigrants, as well as US servicemen stationed in pre-Communist China, brought several variants of the dish to the United States, which may account for its popularity during the 1950s. It came to Hong Kong in the late fifties, with Russian restaurants and hotels serving the dish with rice but not sour cream.

The beef for Beef Stroganoff MUST be filet mignon – any lesser cut compromises the dish and its raison d’être – to impress!  It is unabashedly rich, over-the-top with calories and deserves to be paired with the finest champagne for your most honored of guests. My version amps up the flavor quotient with a touch of optional black truffle oil, mustard, herbs and sherry in a hybrid of French and Russian touches, bringing the recipe truly full circle.

In other words – ladies and gentlemen, serve this to your special someone on Valentine’s Day! It is not at all difficult to make, but will serve to set a seductive and conducive mood for later romantic liaisons! I’d serve this with some delicious Russian rose jam as part of a sweet finish to this feast! For truly special beef, I’d recommend seeking out a top purveyor of prime meats, such as this one.