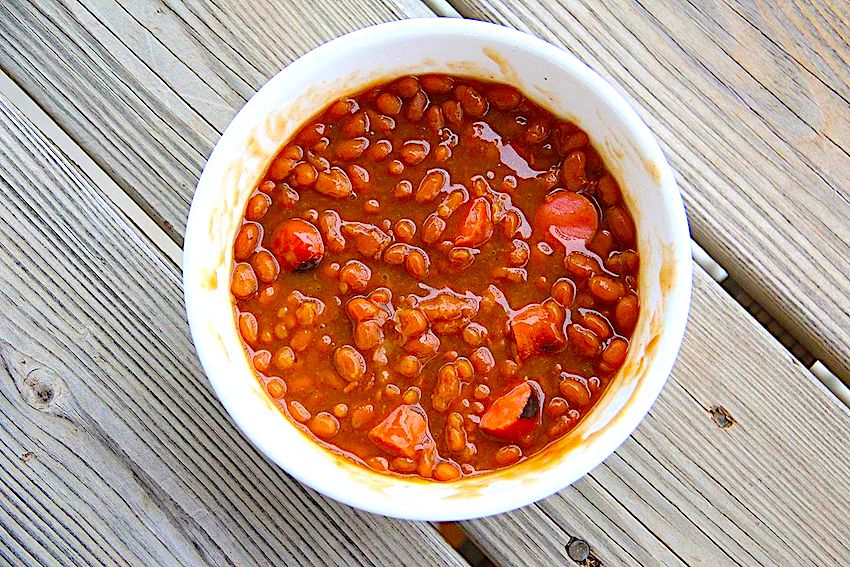 Citizens, every now and again, I share with you a version of a classic recipe that deviates very far from its established pedigree. Normally, TFD tries his best to keep the spirit of the original recipe intact with only minor variants to the original.

This recipe is most definitely NOT one of those – these are baked beans and franks the likes of which you have never seen before!

Baked beans is a dish containing beans, sometimes baked but, despite the name, usually stewed, in a sauce. Most commercially canned baked beans are made from haricot beans, also known as navy beans (a variety of Phaseolus vulgaris) in a sauce.

In Ireland and the United Kingdom, a tomato sauce is most commonly used, and they are commonly eaten on toast or as part of a full English, Scottish, or Irish Breakfast. American Boston baked beans use a sauce prepared with molasses and salt pork, the popularity of which has led to the city’s being nicknamed “Beantown”. Beans in a tomato and brown sugar, sugar, or corn syrup sauce are widely available throughout the U.S.

The beans presently used to make baked beans are all native to South America and were introduced to Europe around 1528. The dish is commonly described as having a savory-sweet flavor and a brownish or reddish tinted white bean once baked, stewed, canned or otherwise cooked.

According to alternative traditions, sailors brought cassoulet from the south of France or northern France, and the Channel Islands, where bean stews were popular. Most probably, a number of regional bean recipes coalesced and cross-fertilized in North America and ultimately gave rise to the baked bean culinary tradition familiar today.

While many recipes today are stewed, traditionally beans were slow baked in a ceramic or cast-iron beanpot. A tradition in Maine, of “bean hole” cooking, may have originated with the native Penobscot people and was later practiced in logging camps.

A fire would be made in a stone-lined pit and allowed to burn down to hot coals, and then a pot with 11 pounds of seasoned beans would be placed in the ashes, covered over with dirt, and left to cook overnight or longer. These beans were a staple of Maine’s logging camps, served at every meal.

Canned beans, often containing pork, were among the first convenience foods, and it is in this form that they became exported and popularized by U.S. companies operating in the UK in the early 20th century.

The U.S. Food and Drug Administration stated in 1996: “It has for years been recognized by consumers generally that the designation ‘beans with pork,’ or ‘pork and beans’ is the common or usual name for an article of commerce that contains very little pork.” The included pork is typically a piece of salt pork that adds fat to the dish.

Canned baked beans with small pork sausages are still available, as are variants with other added ingredients such as chili.

Having gone to school in the Boston area, my franks and beans start with New England-style canned beans, but then go off into a massive detour to India, with a bit of Japan and China thrown in for good measure. These are not the beans you grew up with – but I guarantee you that if you make them as I have outlined, they will be a new favorite! There is only one brand of hot dogs I endorse and it is these.

Are these Boston baked beans? No. Enjoy them for the rare fusion recipe they are, Citizens! 😀