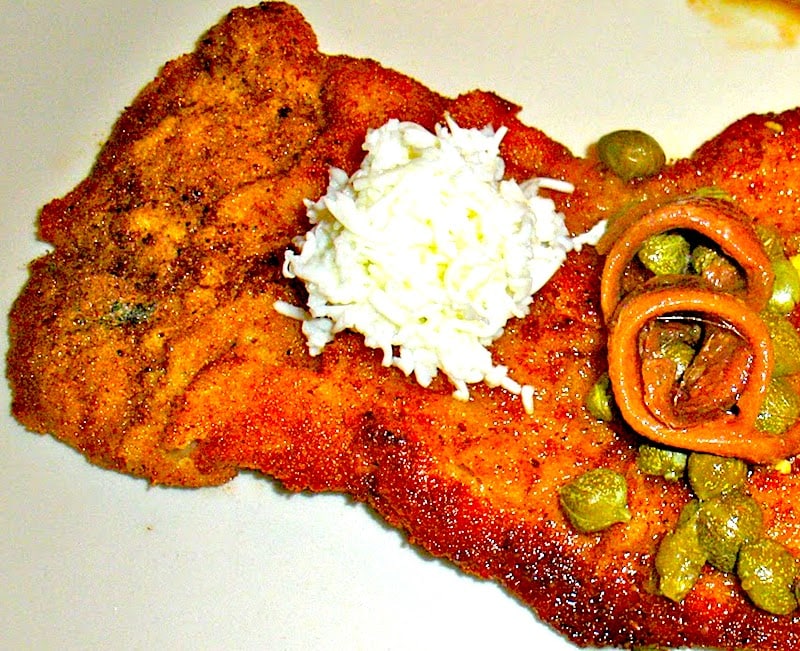 Wiener Schnitzel is a very thin, breaded and pan fried cutlet made from veal. It is one of the best known specialities of Viennese cuisine and is a beloved national dish of Austria.

The designation “Wiener Schnitzel” first appeared in the end of the 19th century, with the first known mention in a cookbook from 1831. In the popular southern German cookbook by Katharina Prato, it was mentioned as eingebröselte Kalbsschnitzchen.

According to a legend, field marshal Joseph Radetzky von Radetz brought the recipe from Italy to Vienna in 1857. In 2007, linguist Heinz Dieter Pohl discovered that this story had been invented. According to Pohl, the dish is first mentioned in connection with Radetzky in 1969 in an Italian gastronomy book (Guida gastronomica d’Italia), which was published in German in 1971 as Italien tafelt, and it is claimed that the story instead concerned the cotoletta alla milanese.

In 1887, E. F. Knight ordered a dish called Wienerschnitzel in a Rotterdam cafe and wrote “as far as I could make out, the lowest layer of a Wienerschnitzel consists of juicy veal steaks and slices of lemon peel; the next layer is composed of sardines; then come sliced gherkins, capers, and diverse mysteries; a delicate sauce flavors the whole, and the result is a gastronomic dream.”

The dish is prepared from veal slices, butterfly cut, about 4 mm thin and lightly pounded flat, slightly salted, and rolled in flour, whipped eggs and bread crumbs. The bread crumbs must not be pressed into the meat, so that they stay dry and can be “souffled”. Finally the Schnitzel is fried in a good proportion of lard or clarified butter at a temperature from 160 to 170 °C[10] until it is golden yellow.

The Schnitzel must swim in the fat, otherwise it will not cook evenly: the fat cools too much and intrudes into the bread crumbs, moistening them. During the frying the Schnitzel is repeatedly slightly tossed around the pan. Also during the frying, fat can be scooped from the pan with a spoon and poured onto the meat. The Schnitzel is done after it turns golden yellow or brown.

The dish is traditionally served in Austria with Kopfsalat (lettuce tossed with a sweetened vinaigrette dressing, optionally with chopped chives or onions), potato salad, cucumber salad, or parsley potatoes. Currently it is also served with rice, french fries or roasted potatoes. It is common to serve it with a slice of lemon, to give the bread crumbs more taste, and a sprout of parsley. “It has however become common in Northern Germany to serve it with lemon, cucumber slices, sardines and capers, to achieve a pleasant appearance”.

My version of this beloved recipe draws inspiration from both Vienna and Germany in its presentation and as to how to cook it – I draw upon the legendary actress Marlene Dietrich for her personal recipe, taken from her own dictation! 🙂 Personally I prefer to serve this with The Hirshon Austrian Potato Salad. 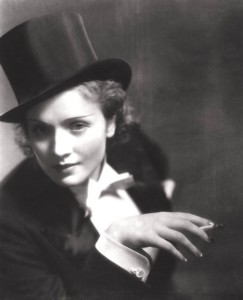 Directions as dictated by the legendary actress, Marlene Dietrich and added to by TFD:

If you can flirt your butcher out of real pink baby veal you can make schnitzels. He must cut slices not thicker than a quarter inch from the best part of the thigh (the filet of veal also called fricandeau). You pound them into further thinness. Don’t tear them, but pound them.

Place the flour, eggs, and bread crumbs in 3 separate large, shallow bowls or pie dishes. Arrange the veal scaloppine on a cutting board and season both sides of each with salt and white pepper.

Coat each scaloppina in flour, shaking off the excess, and then dip completely in the eggs. Drain the scaloppine from the eggs and dredge in bread crumbs, pressing the veal into the crumbs to adhere. Arrange the breaded scaloppine on a wire rack.

Put plenty of ghee (or oil) into a frying pan that can house the schnitzels comfortably. Even crowding them is better than frying them in too large a pan. Put your plates under hot, running water to warm them. (Yes, you can put them in the electric plate warmer.)

Quarter a lemon. Put the finishing touches on the vegetables you plan to serve. Put a piece of brown paper on an empty spot on your kitchen table. You might need it.

Take a look if your guests are ready to have dinner or have finished their first course. Only then flip on the flame under the pan. When your butter is golden brown, lay the schnitzels carefully into the hot butter. Turn the flame up. This will seize the crumbs and give them body. Lower the flame after a short minute to medium.

Turn schnitzels over to fry the other side the same way, until the veal is golden brown and crisp, about 4 minutes. While the other side is frying, dry your plates and line them up.

When you lift out each schnitzel the crust shout not be soggy and dripping. But if it is, lay it for second, yes, you said it, onto the brown paper. Do not pour any of the butter remaining in the pan on the schnitzel. A real (wiener) schnitzel should be dry.

Put a quarter of lemon on the plate and spring of parsley if you have it handy. If you serve any vegetable that has juice, don’t put it on the same plate. No use wetting your schnitzel when it should be dry. But don’t scold anyone who puts everything on the same plate. As long as you serve it dry, your conscience is clear. They are their own bosses.

To serve, place each scaloppina on a serving plate and top with a couple anchovies and a sprinkling of capers, with some lemon wedges on the side. Using a Microplane, grate a little fresh horseradish over each scaloppina just before serving.