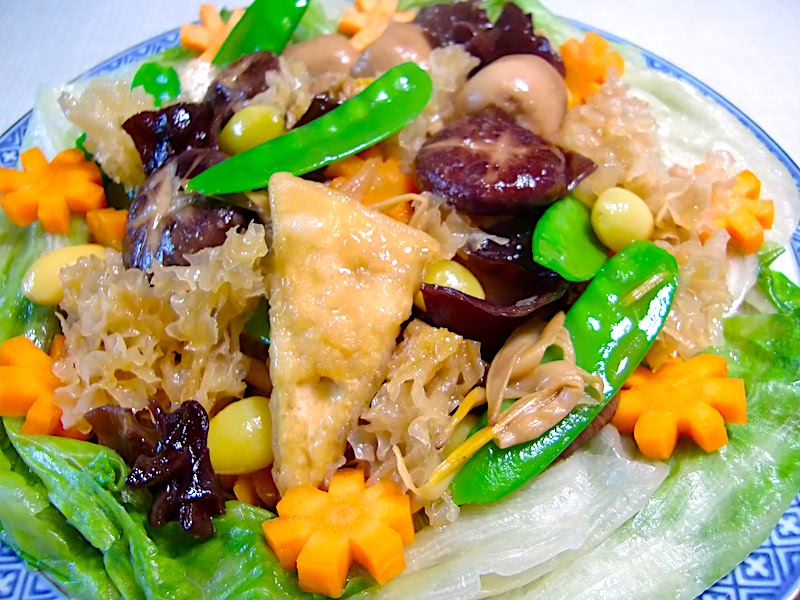 Citizens, attend and heed my clarion call – a rare vegetarian recipe makes an appearance on TFD! 🙂

The dish is traditionally enjoyed by Buddhist monks who are vegetarians, but it has also grown in popularity throughout the world as a common dish available as a vegetarian option in Chinese restaurants.

The dish consists of various vegetables and other vegetarian ingredients, which are cooked in soy sauce-based liquid with other seasonings until tender. The specific ingredients used vary greatly both inside and outside Asia.

The dish is usually made with at least 10 ingredients, although more elaborate versions may comprise 18 or even 35 ingredients. If 18 ingredients are used (as in my version), the dish is called Luóhàn quánzhāi (simplified: 罗汉全斋; traditional: 羅漢全齋).

It is traditionally served in Chinese households on the first day of the Chinese New Year, stemming from the old Buddhist practice that one should maintain a vegetarian diet in the first five days of the new year, as a form of self-purification. Some of the rarer ingredients, such as fat choy and arrowhead, are generally only eaten at this time of year.

The TFG version recreates the authentic recipe, with the eccentric addition of Takuan, the Zen-Buddhist developed Japanese pickle of Daikon Radish! While most Buddhist recipes shy away from strong flavors and eschew the use of onions or garlic, I think this recipe needs a boost of  ‘pickle enlightenment’.  🙂