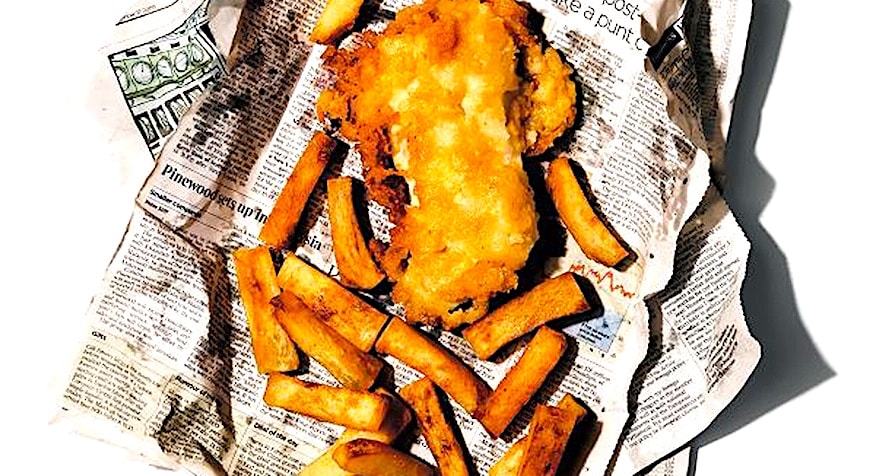 Citizens – few things in this (or any other) life than the classic British meal of fried fish and chips! Nothing can even compare to the ultimate recipe for this wonderful meal, from 3 Michelin-starred English superchef Heston Blumenthal of The Fat Duck restaurant!

The triple-cooked chips are what first cemented his stellar reputation. Blumenthal began work upon the recipe in 1993, and eventually developed the three-stage cooking process for their preparation. The preparation process involves the chips first being simmered and then cooled and drained of water using a sous-vide technique or by freezing, deep fried at 130 °C (266 °F) and again cooled, and finally deep fried again at 180 °C (356 °F) The result is what Blumenthal calls “chips with a glass-like crust and a soft, fluffy centre”.

Blumenthal said he was “obsessed with the idea of the perfect chip”, and he went to great lengths to achieve this, researching the starch content of many different varieties of potato and experimenting with drying chips by microwaving, desiccating or even individually pinpricking them. Eventually Blumenthal developed the three-stage cooking process generally known as Triple Cooked Chips, which he identifies as “the first recipe I could call my own.”

As noted in an email from the Fat Duck’s research manager about the fish batter, he explained how vodka ended up in a beer batter.

The story with the fish batter was that we had developed a really fantastic batter recipe using special starches from National Starch. By using these, along with the siphon to create a very irregular foam structure (an idea that based on the work of Julian Vincent at Bath University and the mechanics of brittle fracture) we created a really outstanding batter that would cook fast enough so that the fish wasn’t over cooked, but stay crisp for a good 20+ minutes. The only downside to this was that no one could recreate this batter at home.

We mostly dealt with this “pickle” by waiting for divine inspiration. That occurred one afternoon at my house when I was reducing alcohol for a sauce and while I had my back turned it boiled away to nothing. I was reminded that alcohol takes far less energy to evaporate than water. I thought it might be possible to reduce the amount of water in the batter by replacing it with alcohol and creating a batter that would cook faster. The added bonus was that alcohol destabilizes the foam, which creates a more inhomogenous structure, which makes the batter crisper!

There was a bit of trial and error, because you do need some gluten or the batter just “blows” off the fish. It seems that a final alcohol content of around 20% seems about right.

Citizens, this is a phenomenal recipe and I urge you to gird your culinary loins to give it a go! Be sure and spray the pickled onion vinegar heavily on the chips!