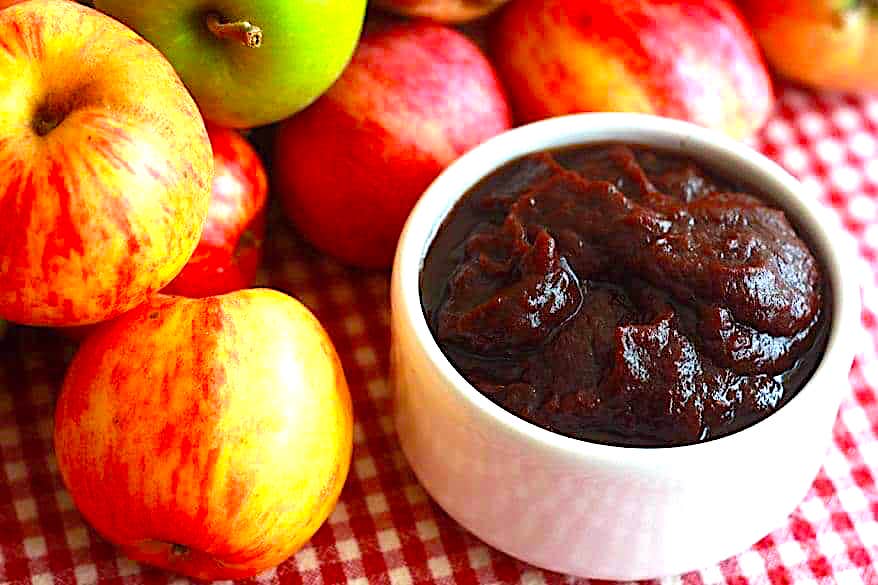 Citizens, heirloom recipe week continues its inexorable forward march, today with a recipe straight from the early 19th century! 🙂 As in most of the preceding recipes in this theme, my name is not in this title as I have not made any major adjustments to the historical version.

Apple butter is a highly concentrated form of apple sauce produced by long, slow cooking of apples with cider or water to a point where the sugar in the apples caramelizes, turning the apple butter a deep brown. The concentration of sugar gives apple butter a much longer shelf life as a preserve than apple sauce.

The roots of apple butter lie in Limburg (Belgium and the Netherlands) and Rhineland (Germany), conceived during the Middle Ages, when the first monasteries (with large orchards) appeared.

The product contains no actual dairy butter; the term butter refers only to the butter-like thick, soft consistency, and apple butter’s use as a spread for breads. Sometimes seasoned with cinnamon, clove, and other spices, apple butter is usually spread on bread, used as a side dish, an ingredient in baked goods, or as a condiment. Apple butter is also used on a sandwich to add an interesting flavor, but is not as commonly used as in historical times.

In areas of the American South, the production is a family event, due to the large amount of labor necessary to produce apple butter in large quantities. Traditionally, it was prepared in large copper kettles outside. Large paddles were used to stir the apples, and family members would take turns stirring. In Appalachia, it was the only type of fruit preserve normally rendered into fruit leather.

Apple butter can be used as a fat substitute in reduced-fat or fat-free cooking, as well as vegan recipes. Different types of apples can be used for the production of apple butter. Apples are chosen based on their physical and chemical properties – such as hardness, sweetness, acidity/tartness, etc. Soft apples are often chosen because they can be broken down more easily and faster when cooked. These types of apples include: McIntosh (soft, creamy), Cortland (soft, sweet-and-tart, all-purpose), Granny Smith (tartness sweetens upon cooking, ideal complement to savory and salty foods).

Apple butter is typically packaged in the same way whether it is prepared in a factory setting or made at home. It can be packaged mechanically in jars or cans through the use of machinery.

Apple butter is a product created as a means of preserving apples. Due to its high acidity, high sugar content and low amounts of free water, an opened package can be kept for months at room temperature without spoiling. Nevertheless there are numerous methods that can be used for the storage of apple butter. No method is 100% dependable, as there is always a chance of the presence of bacteria or other microorganisms within the food itself, on the storage equipment or in the storage facility.

Apple butter and apple sauce also have different uses. Popular ways of using apple butter include, condiment or spreads for pastries and pie fillings. It can also be used as a healthier alternative for oil, shortening, or butter. Some people also enjoy using it to marinate meat, or pairing it with cooked meat and cheeses such as cheddar, brie or chevre.

Apple sauce, in contrast, is usually served on its own or as a side dish for a variety of dishes. Apple Sauce is a lot lighter in color and has a more liquid consistency.

In various locations across the United States, the production of apple butter is associated with a community event, most often occurring in the fall at the end of the apple-harvest season. At many of these events, apple butter is cooked on-site in the traditional method, using huge copper kettles over open fires that are stirred for hours.

Eliza Leslie (1787–1858), frequently referred to as Miss Leslie, was an American author of popular cookbooks during the nineteenth century. She also wrote household management books, etiquette books, novels, short stories and articles for magazines and newspapers. This recipe is hers! An interesting article on apple butter may be found here as well.