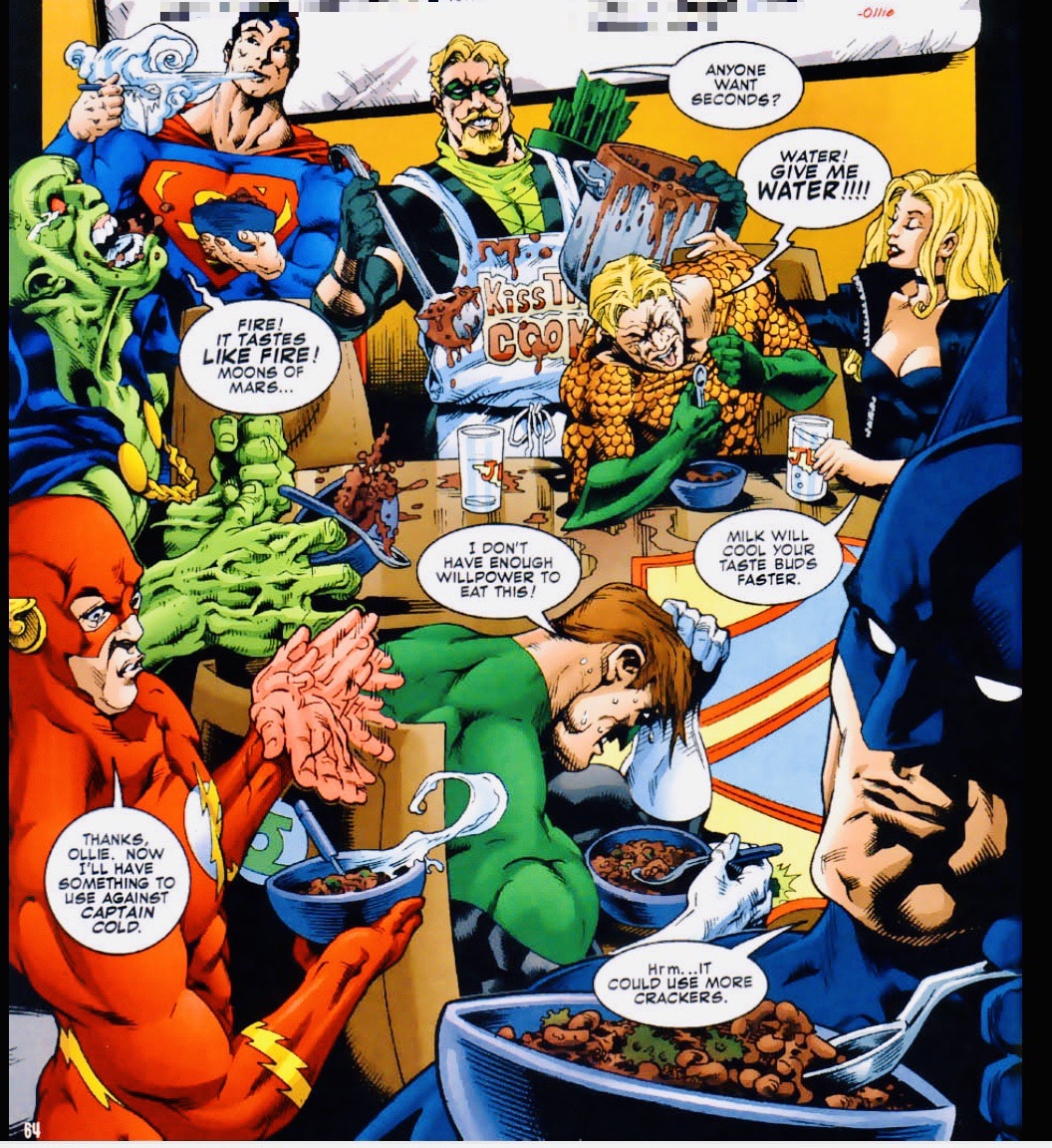 Citizens! While there can be no equivocation that Marvel Comics rules the big screen, it is equally true that DC Comics rules TV – particularly on the WB channel! The show that kicked off the comic adaptation love on the network is ‘Arrow’, an adaptation of the DC hero Green Arrow!

Oliver Queen (aka Green Arrow) had an arsenal of trick arrows shot with unerring accuracy, but his most feared weapon…was his infamous chili! As well-expounded on screenrant.com:

Oliver Queen’s most lethal weapon – his famous chili – has finally made its way into the reality of Arrow and the lore of the Arrowverse in “Star City Slayer” – episode 13 of Arrow season 7. At one point in the episode, Felicity Smoak tried to cheer her sullen stepson, William Clayton, with the news that his father would be making his stupendous chili for dinner that night.

William was less than enthused, partly due to the reasons for his depression, but mostly because he doesn’t love his dad’s chili nearly as much as Oliver and Felicity thought he did. Indeed, William said it was too spicy at dinner that night.

In the comics, Oliver Queen’s chili is a substance of legend and dread among his fellow Justice League members. Aquaman has been instantly dehydrated by a single spoonful and Martian Manhunter has reacted to it in the exact same violent way that Martians reflexively respond to the presence of fire.

The chili has also proven capable of shattering the willpower of veteran Green Lantern Corps members, like Hal Jordan and Guy Gardner, who were unable to find the focus to use their rings after a sample taste of Oliver Queen’s Stupendous Chili.

The Flash claims to have used Green Arrow’s chili in fights with Captain Cold. It is unclear, however, if he used the heat of the chili to negate the effects of Len Snart’s cold gun or if Barry Allen ate it and became too hot to be frozen. Even Superman, with his stomach of steel, cannot finish a bowl of Oliver Queen’s chili without using his ice breath.

Apart from Oliver Queen himself, only two people in the DC Comics universe have proven capable of consuming Green Arrow’s chili without complaint.

The first is Black Canary, who has either developed an immunity after years of enjoying Oliver Queen’s cooking, or is protected because the mutation that gives her a supersonic scream also blesses her with a super-durable throat and mouth.

The other, unsurprisingly, is Batman. Such is the power of Green Arrow’s chili that the memory of its “foul, scorched taste” enabled Batman – temporarily transformed into a god-like being in a pocket universe during the Trinity mini-series – to remember the reality from which he had come.

Perhaps nothing speaks to the power of Green Arrow’s chili as the fact that it proved a match for the lead bellies of legendary inter-dimensional warrior Norville “Shaggy” Rogers and his animal companion, Scooby-Doo.

The two encountered Green Arrow in Scooby-Doo Team-Up #25, where Oliver Queen offered to let them have some of his leftover chili after he accidentally destroyed their Scooby Snack stockpile while under the influence of the Psycho-Pirate. Famed for their ability to consume anything, the two heroes were still left belching fire and screaming in pain for a brief moment before requesting a second serving.

During the 1970’s when I was avidly devouring comics as a boy, Green Arrow was very popular and I distinctly remember his chili of death – the recipe for which DC saw fit to finally share! It’s been a running gag for more than 40 years now, thanks to the WB plot shoutout!

I wouldn’t dare change anything in this infamous dish, except that my own asbestos palate demands a much stronger hot sauce than Tabasco – I prefer the deadly Scorpion pepper hot sauce found here. Offer it only as a side and do warn people before they try it!

The Arrowverse on the WB is finally coming to a close this season, but Oliver Queen’s epic chili recipe lives on! To cool the unquenchable fire afflicting your throat, tongue and bowels, follow this bowl of chili death with some cooling Indian rice pudding!