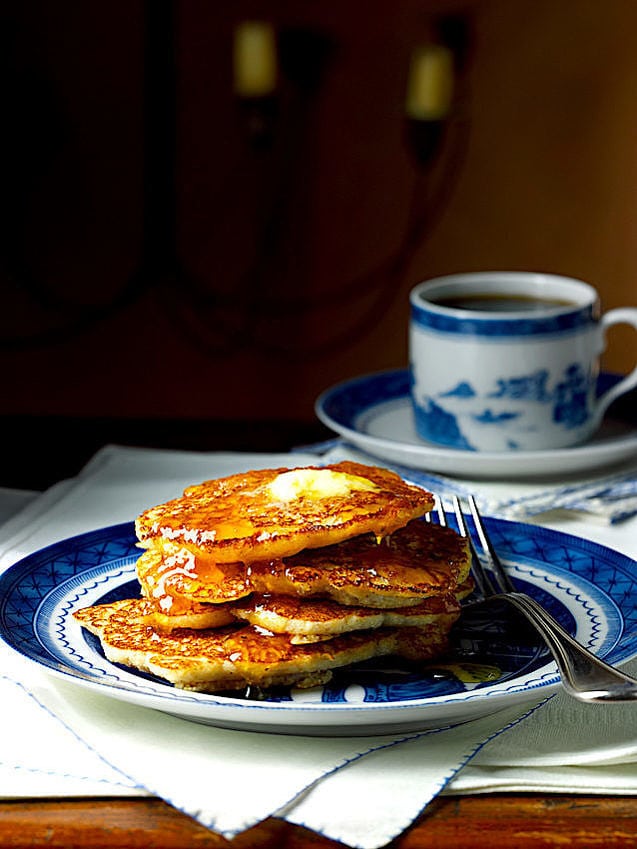 Citizens, over the last year, the American people have been sorely divided over politics – depending on who you ask, Obama was a bad president, Trump is a bad president, and let’s not even get started on Congress, shall we?

TFD urges all of his multitudinous Citizens to rise above petty politics and unite as proud Americans and lovers of cuisine – surely we can all agree on that, at the very least?

There is one president we can ALL agree was amazing – George Washington, and today I share his personal recipe for hoecakes with you, !

Johnnycake (also called journey cake, shawnee cake, hoe cakes or johnny bread) is a cornmeal flatbread. An early American staple food, it is prepared on the Atlantic coast from Newfoundland to Jamaica. The food originates from the native inhabitants of North America. It is still eaten in the West Indies, Dominican Republic, Saint Croix, Bahamas, Colombia, and Bermuda as well as in the United States and Canada.

The modern johnnycake is found in the cuisine of New England, and often claimed as originating in Rhode Island. A modern johnnycake is fried cornmeal gruel, which is made from yellow or white cornmeal mixed with salt and hot water or milk, and sometimes sweetened. In the Southern United States, the word used is hoecake, although this can also refer to cornbread fried in a pan.

The word is likely based on the word “Jonakin,” recorded in New England in 1765, itself derived from the word “jannock,” recorded in Northern England in the sixteenth century. According to Edward Ellis Morris, the term was the name given “…by the [American] negroes to a cake made of Indian corn (maize).”

Another suggested derivation is that it comes from Shawnee cake although some writers disagree.

According to the Oxford English Dictionary, the term hoecake first occurs in 1745, and the term is used by American writers such as Joel Barlow and Washington Irving. The origin of the name is the method of preparation: they were cooked on a type of iron pan called a hoe. There is conflicting evidence regarding the common belief that they were cooked on the blades of gardening hoes. A hoecake can be made either out of cornbread batter or leftover biscuit dough. A cornbread hoecake is thicker than a cornbread pancake.

Native Americans were using ground corn for cooking long before European explorers arrived in the New World. The johnnycake originates with the native inhabitants of Northern America; the Algonquians of the Atlantic seaboard are credited with teaching Europeans how to make the food.

Southern Native American culture (Cherokee, Chickasaw, Choctaw, Creek) is the cornerstone of Southern cuisine. From this culture came one of the main staples of the Southern diet: corn (maize). Corn was used to make all kinds of dishes from the familiar cornbread and grits to liquors such as whiskey and moonshine, which were important trade items. Cornbread was popular during the American Civil War because it was very cheap and could be made in many different sizes and forms. It could be fashioned into high-rising, fluffy loaves or simply fried for a fast meal.

To a far greater degree than anyone realizes, several of the most important food dishes that the Southeastern Indians live on today is the “soul food” eaten by both black and white Southerners. Hominy, for example, is still eaten … Sofkee live on as grits … cornbread [is] used by Southern cooks … Indian fritters … variously known as “hoe cake”, … or “Johnny cake.” … Indian boiled cornbread is present in Southern cuisine as “corn meal dumplings”, … and as “hush puppies”, … Southerners cook their beans and field peas by boiling them, as did the Indians … like the Indians they cure their meat and smoke it over hickory coals.

According to the manuscript of America Eats, a WPA guide to American food culture in the beginning decades of the twentieth century, Rhode Island “jonny cakes” were made in the 1930s as follows:

In preparation, [white corn] meal may or may not be scalded with hot water or hot milk in accordance to preference. After mixing meal with water or milk it is dropped on a smoking hot spider [pan] set atop a stove into cakes about 3″x3″x½″ in size. The secret of cooking jonny cakes is to watch them closely and keep them supplied with enough sausage or bacon fat so they will become crisp, and not burn. Cook slowly for half an hour, turn occasionally, and when done serve with plenty of butter.

Family members and visitors alike testified that hoecakes were among George Washington’s favorite foods. He invariably ate them at breakfast, covered with butter and honey, along with hot tea—a “temperate repast” enjoyed each morning.

Years after Washington’s death, Nelly Custis Lewis described her method for preparing a yeast-risen version of hoecakes in a letter to her close friend Elizabeth Bordley Gibson. “Make it by candlelight,” she wrote, “& let it remain [by a warm hearth] until the next morning.” Describing the baking method, she wrote: “[D]rop [the batter] a spoonful at a time on a hoe or griddle (as we say in the South). When done on one side turn the other—the griddle must be rubbed . . . with a piece of beef suet.”

From Dining with the Washingtons

This recipe is a modern adaptation of the 18th-century original. It was created by culinary historian Nancy Carter Crump for the book Dining with the Washingtons (2011).