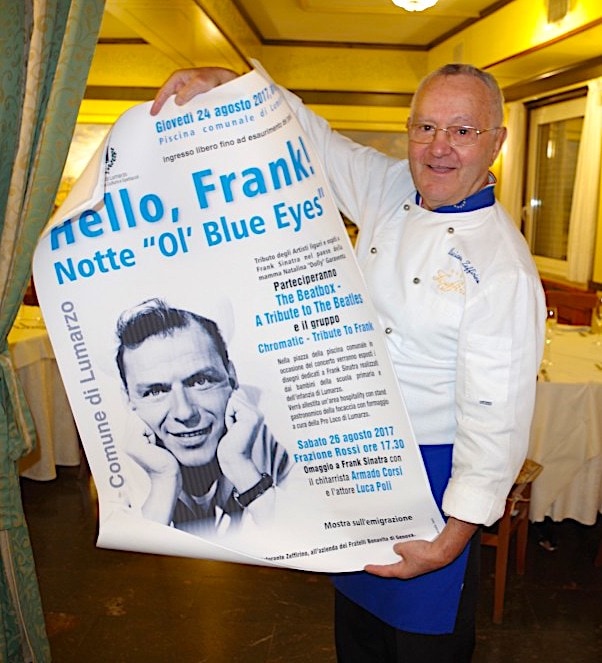 My Citizens – last week, I was back in Las Vegas and it was with a heavy heart that I passed the Venetian Hotel, once home to my favorite Italian restaurant in the city: the mighty Zeffirino!

Closed at the very end of 2017, Zeffirino’s home base in Genoa, Italy is still going strong and is in fact celebrating its 80th anniversary this year! Opened in 1939 by a family of farmers, Zefferino is renowned as serving the best homemade pesto in Genoa, and therefore – Italy itself!

The restaurant was beloved by many celebrities, as noted in this excerpted story from jetsettersmagazine.com:

In 1939, Zeffirino Belloni established his family restaurant in Genoa, with his son Gian Paolo soon becoming the chef. The restaurant has been attracting Italy’s glitterati ever since with its fresh ingredients and Gian Paolo’s creative recipes.

The Las Vegas restaurant proudly displays three lovely chairs used by Pope John Paul II, Frank Sinatra, and Luciano Pavarotti on special visits to the original Genoa restaurant. Frank was a particular fan of Zeffirino’s pesto, and Luciano’s favorite is “combed maccheroni,” a batch of which he special-ordered for his return journey after a recent concert visit here. Now that’s takeout!

Their pesto is so good that they alone make pesto for the Pope Himself and have for decades! 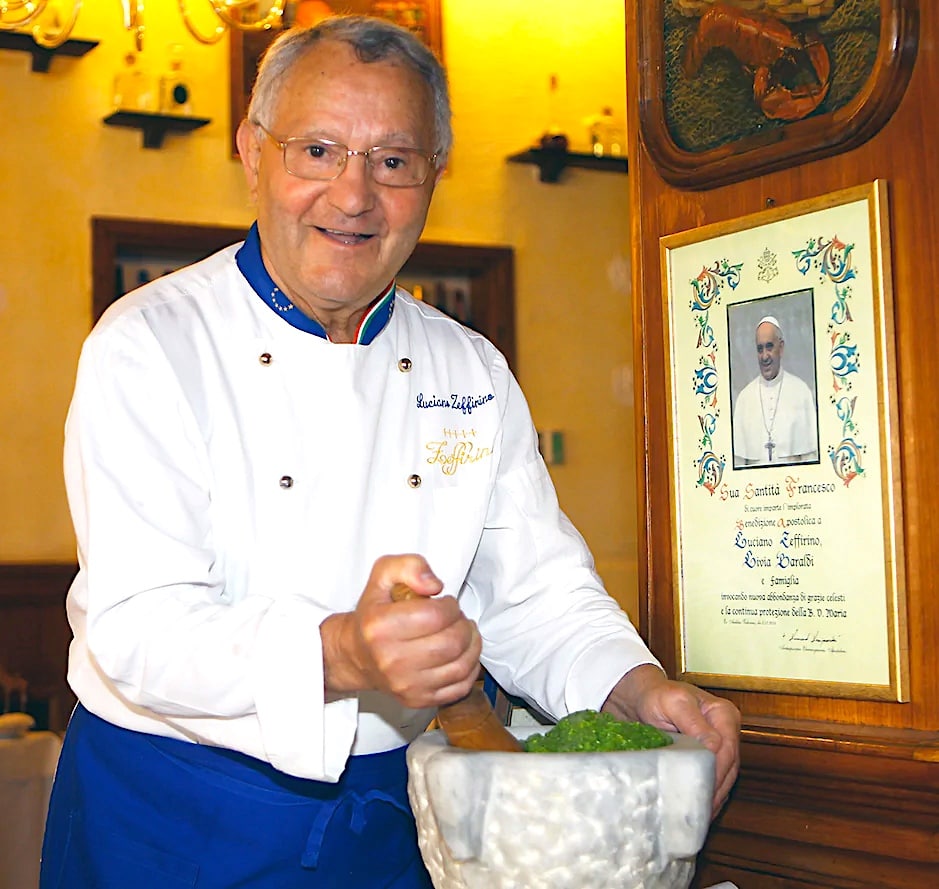 The son of Zeffirino’s Founder Making His Famed Pesto Worthy Of The Pope Himself! Image Used Under Creative Commons License From miopapa.it

Yet there was another huge fan of their pesto – Ol’ Blue Eyes, the Chairman of the Board himself – the legendary Frank Sinatra!

It was in fact because of his Las Vegas residency that Zeffirino opened their only satellite restaurant away from the Genoa homebase! One of Sinatra’s final acts before his death was in fact to visit the Vegas restaurant! Read on, dear Citizen and learn the story of an unlikely friendship between a crooner and a Chef.

It is well documented that Frank Sinatra was a boxing enthusiast. But the crooner, born on this day in 1915, had a lesser known passion for Calcio’s oldest team.

The smooth-voiced singer and movie star supported Genoa CFC. The origins of this unlikely love affair came from his mother. Natalia Delia Garavante was born in Rossi, a tiny part of the Lumarzo area of Liguria.

A strong matriarch and campaigner for the rights of Italian immigrants in New Jersey, Natalia, known as “Dolly”, passed down Genovese traditions, including pesto, to her only child.

Sinatra met celebrated Ligurian chef Luciano Belloni Zeffirino at a boxing match in the 1960s in the states and the two became friends. The entertainer was so enamoured with Zeffirino’s pesto he had supplies flown from Genoa to his homes in Las Vegas, Palm Springs and Malibu.

It didn’t stop there. “Frank always said he’d visit us. And once he came to our restaurant by private helicopter. He was a real lover of pesto. He wanted us to open a private restaurant just for him,” said Zeffirino.

The two men also bonded over boxing chat and through their conversations Ol’ Blue Eyes learned about Genoa CFC. His adoration for the region was beyond doubt. During a concert in the city in 1987 he told the audience “two very important and wonderful people came from Genoa. Christopher Columbus and my mother.”

It’s not known whether he really immersed himself in the world of calcio, but he was buried wearing a tie in the Rossoblu’s colours. There is said to be a photo of the Oscar winner wearing a Genoa shirt.

This recipe was Sinatra’s favorite – elegant, classy and smooth – just like him! 🙂

It is imperative that you follow proper procedure and techniques for making the finest pesto – I detail all the needed steps and ingredient sources here.

I am saddened by the loss of Zefferino in Vegas, but look forward to the day I can at last visit the home restaurant in Genoa! Follow the recipe and you’ll have a dish worthy of gracing the table of Sinatra himself!

Do NOT follow this link or you will be banned from the site! Click here to see our Privacy Policies, Citizen!
181shares
wpDiscuz
0
0
Would love your thoughts, please comment.x
()
x
| Reply