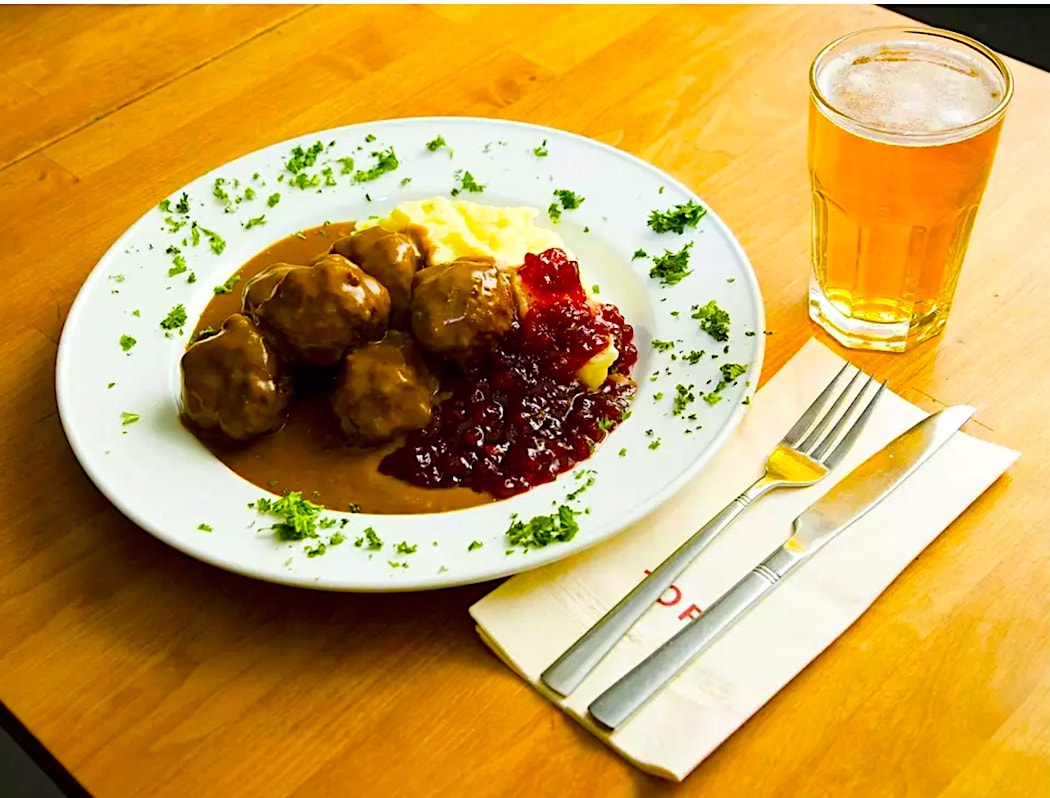 My Citizens – the last ten days of travel have been truly hellish for the Viscount of Victuals, the eternally wandering One who ALONE is TFD! Over the course of 10 days, I have – quite literally – been in 8 cities (San Francisco, NYC, London, Helsinki, Oulu, Frankfurt, Ludwigshafen and Munich), visited 4 countries, crossed 5 time zones, made 7 airplane trips (totaling 32 hours in the air, several of which were in the middle of one of Europe’s worst hurricanes in recent memory), participated in 2 train trips (totaling 4.5 hours) and was involved in 21 different meetings (1 of which was for 14 hours straight?!).

After all this, my exhaustion is beyond description, but I will rally my flagging energies to give you this delicious recipe for Finnish meatballs in ‘cut cognac’ sauce (Lihapullat Jallukastikkeessa in Finnish)! I have previously posted my acclaimed recipe for standard Finnish meatballs here, but today I give you a version in a special sauce with a uniquely Finnish ingredient!

Cut brandy is a liquor made of brandy, neutral grain spirit and water. Sometimes, sugar is used to soften taste. It is often colored with caramel color. Most cut brandies are graded by the relative amount of brandy it contains. Grades are represented by stars.

0 stars, almost no brandy at all, only some bringing color to the grain liquor.
1 star, one third (⅓) of brandy
2 stars, half of brandy (seldom used)
3 stars, three quarters (¾) of brandy

The Finnish Jaloviina (“noble Brännvin”, colloquially Jallu) is a cut cognac with 38% (one star) or 40% (three stars) ABV. It has a strong taste and 4–7 grams of sugar per liter, depending on the grade. Special or vintage batches are also bottled, these may have slightly higher alcohol and sugar content. The brandy used for Jaloviina is cognac. Jaloviina Tammi is a limited-edition bottling to celebrate the Finnish independence.

Jaloviina or Jallu is a legendary Finnish cut brandy, which is made by blending cognac with grain liquor. Its production began in 1932 as a cheaper alternative for cognac, and originally this three star grade Jallu had ¾ of cognac. The Second World War cut luxury item supplies, and in 1940 Jallu had to be replaced by a one star grade, which had a mere ¼ of cognac in it. During the difficult years the popularity of the drink grew, and has remained relatively high in demand ever since.

Ville Valo, the lead singer of a Finnish rock band HIM, has made Lihapullat meatballs served with Jallu sauce popular by announcing them his favorites. The recipe was developed a few years ago in his local hangout, Restaurant Tori in Helsinki.

My version of this classic recipe has several TFD tweaks, including the use of Icelandic Birch-Smoked Salt, which can be found here, high-quality demiglace, which may be be purchased here, Finnish tar syrup (which is impossible to buy outside of Finland, sadly) – thus I have made this genius replacement of European pine cone syrup, which can be bought here,  Finnish mustard, one of my favorites, can be purchased here. The use of allspice is what gives this meatball its characteristically Finnish taste, so please don’t shortchange on it!

Citizens, , and I am confident you will find it worthy of your time and efforts to make! By the way, one of my favorite covers of any song is their version of ‘Wicked Game’, which you can listen to here.