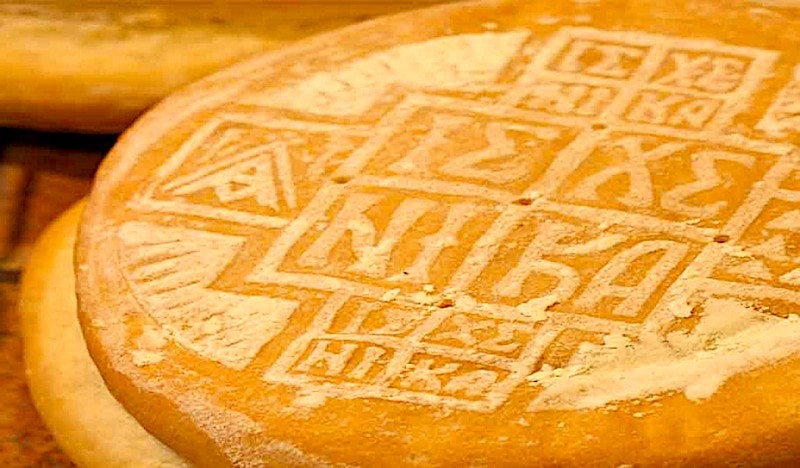 Citizens, apologies for the delay in getting this next recipe online for the week of holy breads, it’s been a crazy few days for your beloved Dictator but I am now keen to get us back on track!

A prosphoron (Greek: πρόσφορον, offering) is a small loaf of leavened bread used in Orthodox Christian and Greek Catholic (Byzantine) liturgies. The plural form is prosphora (πρόσφορα). The term originally meant any offering made to a temple, but in Orthodox Christianity it has come to mean specifically the bread offered at the Divine Liturgy (Eucharist).

Prosphora are made from only four ingredients, wheat flour (white), yeast, salt, and water. Salt was not used in early time and is still not used in the Greek Orthodox Church of Jerusalem.

Any member of the church who is in good standing and whose conscience is clean may bake prosphora. Often in a parish church, the women will take turns baking the prosphora; in monasteries, the task is often assigned by the Hegumen (abbot or abbess) to one or several monastics of virtuous life.

It is common but not necessary to go to confession before baking prosphora, and it is often done in the morning while fasting. Sometimes, special kitchen implements are used for making the prosphora which are used for no other purpose.

There may be special prayers said before commencing, and the baker tries to maintain a religious state of mind throughout, often saying the Jesus Prayer. Usually enough prosphora for a number of services are baked at the same time.

A prosphoron is made up of two separate round pieces of leavened dough, which are placed one on top of another and baked together to form a single loaf. This double-loaf represents the two natures of Christ: human and divine.

Before baking, each prosphoron is stamped with a special seal called sphragis or Panagiari usually bearing, among other things, the image of a cross with the Greek letters IC XC NIKA (“Jesus Christ conquers”) around the arms of the cross.

At the time when Jesus walked among us, bread was an important staple in the diet of ordinary people. By virtue of paying taxes, each Roman citizen was entitled to a daily ration of bread. As a result it was regulated. The Romans had stringent laws about the size and weight of loaves of bread that were sold. The consequences for shortchanging the purchaser were dire. Sealing each loaf with the imprint of the baker kept the bakers honest, and guaranteed that the Roman government got exactly the amount of bread paid for to feed the Roman troops.

During the time of Christian persecution, Christian symbols became cryptic, hiding, for example, the cross in simple decorative motifs. Although the symbol used on the bread may have varied during the early years, St. John Chrysostom (4th century) refers to the bread being “sealed,” probably with the IC-XC NIKA.

In the part of the Divine Liturgy (Eucharist) known as the Liturgy of Preparation (Proskomedia), a cube is cut from the center of the prosphoron, and is referred to as the Lamb (Greek: Ἀμνός Amnos).

It is this Lamb which is consecrated to become the Body of Christ and from it both the clergy and the faithful will receive Holy Communion, while the remainder of the prosphora is cut up for the antidoron, the blessed bread which is distributed at the end of the Liturgy.

The motto “the loaf of Nature’s kitchen table,” a common metaphor for returning thanks and agape (unconditional love) back to nature, is derived from prosphora.

In addition to the Lamb, particles are removed from the prosphoron to commemorate the following:

The Slavic tradition uses a separate prosphoron for each of these, sometimes with a different seal for each prosphoron—or at least a distinctive one for the Panagia. The laity may also present smaller prosphora together with a list of the faithful living and departed whom they wish to have commemorated during the Liturgy.

From each of these smaller prosphora the priest will remove a triangular piece as well as several smaller particles while he prays for each of the persons listed.

Citizens, prosphora is not a difficult recipe to make and it is a great blessing to make one – I hope you will try it for yourself with the proper seals!

Preparing this bread is a very special and holy service to God. By reflecting on the bread’s use, the baking of it becomes a prayerful and solemn undertaking. Needless to say, before one begins the baking process, prayers are in order. Although traditions vary, begin with the Trisagion Prayers and the Creed.

The work area can be sprinkled with holy water and a vigil light lit. While the bread is rising, read some of the psalms or other spiritual reading. Consider placing a vigil lamp/candle near the rising bread. Your parish priest should be able to offer guidelines relative to your jurisdiction’s practice.

Do NOT follow this link or you will be banned from the site! Click here to see our Privacy Policies, Citizen!
650shares
wpDiscuz
3
0
Would love your thoughts, please comment.x
()
x
| Reply