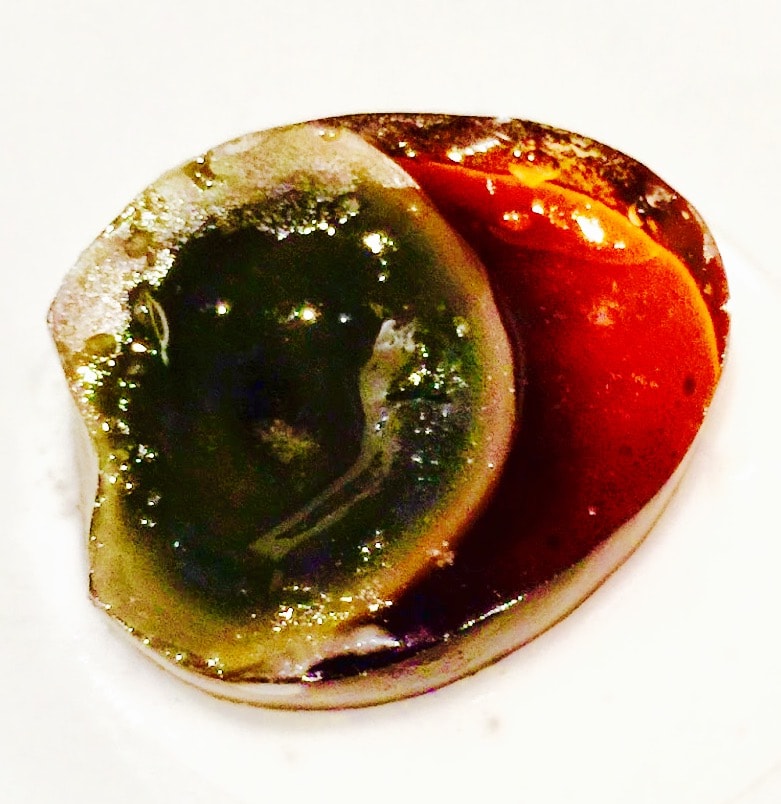 Citizens, pidan (Chinese: 皮蛋; pinyin: pídàn), also known as preserved egg, hundred-year egg, thousand-year egg, thousand-year-old egg, and millennium egg, is a Chinese preserved food product and delicacy made by preserving duck, chicken or quail eggs in a mixture of clay, ash, salt, quicklime, and rice hulls for several weeks to several months, depending on the method of processing.

Through the process, the yolk becomes a dark green to grey color, with a creamy consistency and strong flavor due to the hydrogen sulfide and ammonia present, while the white becomes a dark brown, translucent jelly with a salty flavor. Many westerners run screaming from these delicacies – but they have no idea what they are missing! This is one of TFD‘s favorite snacks, in fact!

The transforming agent in the egg is an alkaline salt, which gradually raises the pH of the egg to around 9–12, during the curing process. This chemical process breaks down some of the complex, flavorless proteins and fats, which produces a variety of smaller flavorful compounds.

Some eggs have patterns near the surface of the egg white that are likened to pine branches, and that gives rise to one of its Chinese names, the pine-patterned egg.

The method for creating century eggs likely came about through the need to preserve eggs in times of plenty by coating them in alkaline clay, which is similar to methods of egg preservation in some Western cultures. The clay hardens around the egg and results in the curing and creation of century eggs instead of spoiled eggs.

According to some, the century egg has over five centuries of history behind its production. Its discovery, though not verifiable, was said to have occurred around 600 years ago in Hunan during the Ming Dynasty, when a homeowner discovered duck eggs in a shallow pool of slaked lime that was used for mortar during construction of his home two months before. Upon tasting the eggs, he set out to produce more — this time with the addition of salt to improve their flavor — resulting in the present recipe of the century egg.

The traditional method for producing century eggs is the development and improvement from the aforementioned primitive process. Instead of using just clay, a mixture of wood ash, calcium oxide, and salt is included in the plastering mixture, thereby increasing its pH and sodium content. The addition of calcium oxide and wood ash to the mixture lowers the risk of spoilage and also increases the speed of the aforementioned primitive process.

A recipe for creating century eggs through this process starts with the infusion of three pounds of tea in boiling water. To the tea, three pounds of calcium oxide (or seven pounds when the operation is performed in winter), nine pounds of sea salt, and seven pounds of ash from burned oak is mixed into a smooth paste.

While wearing gloves to prevent the chemicals from burning the skin, each egg is individually covered by hand, then rolled in a mass of rice chaff to keep the eggs from adhering to one another before they are placed in cloth-covered jars or tightly woven baskets. The mud slowly dries and hardens into a crust over several months, and then the eggs are ready for consumption.

Even though the traditional method is still widely practiced, modern understanding of the chemistry behind the formation of century eggs has led to many simplifications in the recipe. For instance, soaking raw eggs in a solution of table salt, calcium hydroxide, and sodium carbonate for 10 days followed by several weeks of aging while wrapped in plastic is said to achieve the same effect as the traditional method. This is because the reaction needed to produce century eggs is accomplished by introducing hydroxide and sodium ions into the egg, regardless of the method used.

Century eggs can be eaten without further preparation, on their own or as a side dish. As an hors d’œuvre, the Cantonese wrap chunks of this egg with slices of pickled ginger root (sometimes sold on a stick as street food). A Shanghainese recipe mixes chopped century eggs with chilled tofu. In Taiwan, it is popular to eat century eggs by slicing them, and placed on top of cold tofu with katsuobushi, soy sauce, and sesame oil in a style similar to Japanese hiyayakko.

A variation of this recipe common in northern China is to slice century eggs over chilled silken (soft) tofu, adding liberal quantities of shredded young ginger and chopped spring onions as a topping, and then drizzling light soy sauce and sesame oil over the dish, to taste. They are also used in a dish called old-and-fresh eggs, where chopped century eggs are combined with (or used to top) an omelet made with fresh eggs.[6] The century eggs may also be cut into chunks and stir fried with vegetables, which is most commonly found in Taiwanese cuisine.

Some Chinese households cut them up into small chunks and cook them with rice porridge to create “century egg and lean pork congee” (Chinese: 皮蛋瘦肉粥; pinyin: pídàn shòuròu zhōu). This is sometimes served in dim sum restaurants. Rice congee, lean pork, and century egg are the main ingredients. Peeled century eggs are cut into quarters or eighths and simmered with the seasoned marinated lean slivers of pork until both ingredients are cooked into the rice congee. Fried dough sticks known as youtiao are commonly eaten with century egg congee. Another common variation of this dish is the addition of salted duck eggs into the congee mixture.

At a recent dinner at the 3 Michelin Star Asian-influenced restaurant Benu in San Francisco, I was served a version of this recipe made with modern techniques and quail eggs instead of duck eggs! This is the recipe of the brilliant chef of Benu, Cory Lee!

Do NOT follow this link or you will be banned from the site! Click here to see our Privacy Policies, Citizen!
3298shares
wpDiscuz
2
0
Would love your thoughts, please comment.x
()
x
| Reply