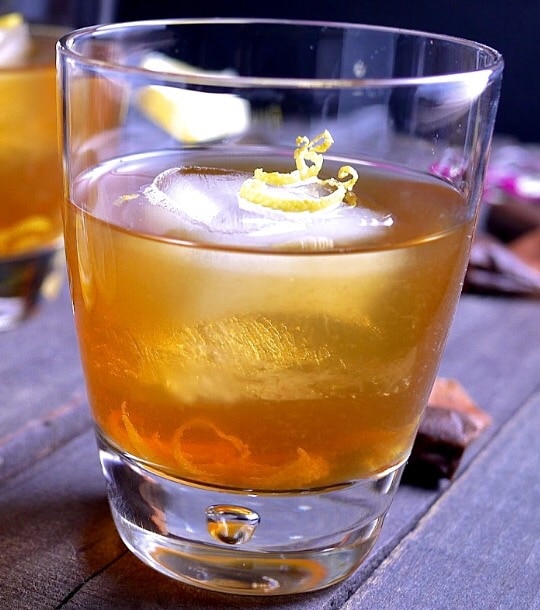 Citizens! My best wishes to you for a 2015 replete with gastronomic delights, a surfeit of good cheer and a brimstone whiff of revolutionary fervor! 😀

To celebrate, I refer you to one of my favorite historical recipes – for a punch guaranteed to put the Bacchanalia into your New Year’s Eve soirée!

Charleston was the home of the “Light Dragoons”, a pseudo-military society of carousing gentlemen in the late 1700’s who really knew how to throw a party.

This punch WAS in fact the party – it serves about 50!

Interestingly, this particular recipe despite originating in South Carolina ended up being published by a Canadian politician, from her Northernly carpetbagging grandfather. 😉

As noted in this excerpt from britishfoodinanerica.com:

Its constituent parts indicate that this excellent punch could indeed date to the eighteenth century.

In this context ‘military’ may be a bit of a descriptive stretch for these dragoons during most of their history, although they did play a role for a stretch of the Civil War. The unit was primarily what New Englanders call a ‘chowder and marching society’ that would assemble for the sake of conviviality as much as drill and, like the Ancient and Honorable Artillery Company of Boston, might look colorful on parade.

Until 2011 the Light Dragoons’ punch amounted to a nearly lost recipe, forgotten by all but a few extravagant hosts scattered across North America. Then Roderick Weaver, the head bartender at Husk, revived it. According to Jed Portman, a blogger at seriouseats.com, it is one of only two combinations left from the restaurant’s first barcard “while plenty of other drinks have come and gone around it.” (“Down South”)

Whether Portman is a reliable source about the origin of the formula that Weaver follows at Husk is open to question. He asserts that a habitué of the bar saw mention of the punch in the records of the Charleston Historical Society, but apparently not its recipe. That, he says, surfaced when a friend of the barfly in turn “recognized the punch from an old cookbook.” (“Down South”)

Read the fascinating history of the drink here!

Enjoy, citizens – stay safe this evening and enjoy yourselves in a manner worthy of your Generalissimo!