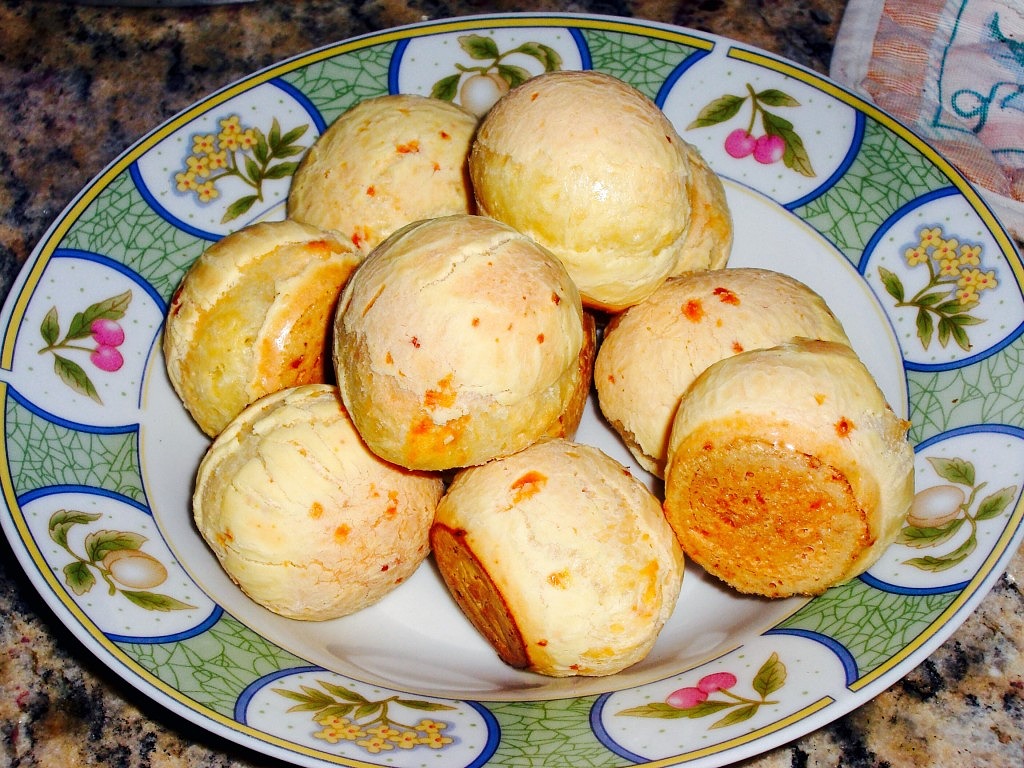 Citizens, there can be no doubt whatsoever that for the Gluten-Free, life is tough. There are so few recipes that are anything but a pale shadow of their former glutinous glory that it’s enough to drive you to despair.

Not this recipe, Citizens! Pão de queijo (“cheese bread” in Portuguese) or Brazilian cheese bread is a totally-gluten-free small baked cheese roll or cheese bun, a popular snack and breakfast food in Brazil.

It is a traditional Brazilian recipe, from the state of Minas Gerais. Though its origins are uncertain, it is speculated that the recipe has existed since the eighteenth century, although it became popular around the 1950s.

Pão de queijo originated from African slaves like many other Brazilian foods. Slaves would soak and peel the cassava root and make bread rolls from it. At this time, there was no cheese in the rolls.

At the end of the 19th century, more ingredients became available to the Afro-Brazilian community such as milk and cheese. They added milk and cheese to the tapioca roll making what we now know as Pão de queijo.

It is also widely eaten in northern Argentina and is inexpensive and often sold from streetside stands by vendors carrying a heat-preserving container.

In Brazil, it is also very commonly found in groceries, supermarkets and bakeries, industrialized or freshly made.

Despite being referred to as “bread”, the cheese bread is basically a type of starch tart cookie or sweet plus eggs, salt, vegetable oil, and cheese, with soft and elastic consistency and with a few variations.

With the discovery of mines near Ouro Preto around 1700, 1/5 of the Brazilian population, mainly slaves, occupied a vast territory, moving from the Northeast and shifting the economic hub of the colony towards the Southeast.

The mining cycle caused a huge impact and stimulus to the production of staple foods and this is when cheese bread was created. The Northeast and the nearest regions obtained beans, rice, corn and its cornmeal, pork and lard, milk and cheese.

More distant areas such as the gaucho pampa, began to offer kind of beef meat. It is said that the cheese bread was offered by slave women to the farmers. At the time, wheat flour, the raw material of classical baking, was hard to find.

Typical of temperate regions, the ancient cereal never combined with the warmth of the Brazilian Northeast, and was then imported from Europe to Brazil to serve the King’s noblemen.

Creatively, Minas Gerais cooks replaced the non-existent wheat with starch derived from cassava tuber with tupiniquins origins. Added the mass cured cheese chips, hardened and grated, and taken to the oven, turned out to like being called “bread”.

Brazilian Cheese Bread is by definition gluten-free since it never had any to begin with. Made with Tapioca flour, it’s chewy, cheesy and deliciously addictive, especially with a splash of hot sauce (Brazilian, of course but Tabasco also works in a pinch).

This recipe from Lifemadesimplebakes.com is the best I’ve found – I hope you enjoy it! Tapioca flour can be found in the baking aisle at most grocery stores with a natural foods section or a specialty store like Whole Foods. Bob’s Red Mill is the brand I like. To quickly bring eggs to room temperature, place in a bowl of warm water for 5 minutes, remove and use.

I am exceedingly fond of this recipe and the fact that it is also gluten-free is a Godsend for those sensitive to its digestive impact due to Celiac or intolerance.