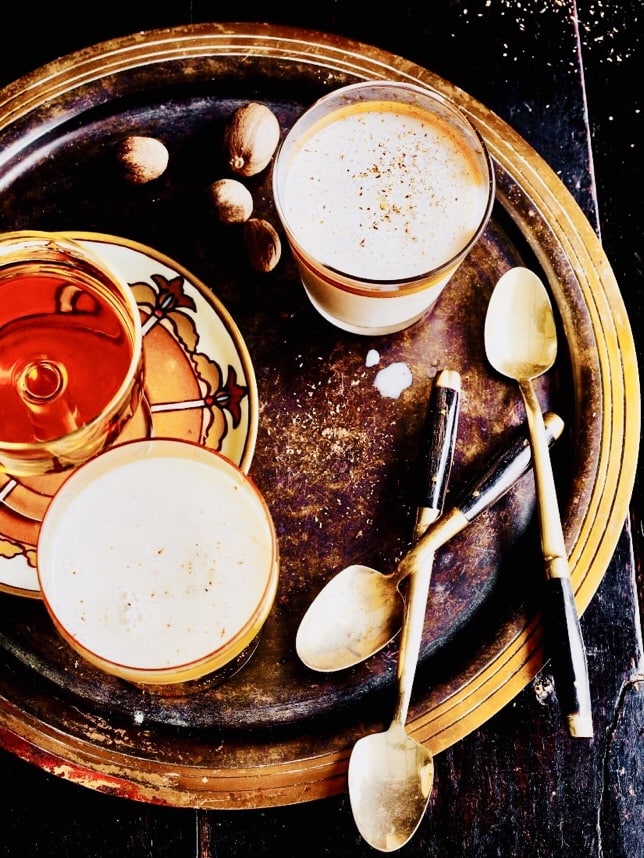 My Citizens, tomorrow is New Year’s Eve and I can state without equivocation that this recipe will ring in 2018 in the highest of fine style! 🙂

Though milk punch has a long history in Louisiana, its American origins lie in the colonial-era cities along the East Coast, back when both milk and brandy were thought to have powerful medicinal properties.

From there, it spread quickly, even meriting a mention in the barman Jerry Thomas’s 1862 classic guide, How to Mix Drinks, widely regarded as the first-ever cocktail book.

This recipe is from Chris Hannah, head bartender at Arnaud’s French 75 in New Orleans’ French Quarter. Arnaud’s is one is one of my all-time favorite restaurants and I can personally vouch for the deliciousness of this drink! 🙂

In 1918, a colorful, French wine salesman named Arnaud Cazenave opened the grand New Orleans restaurant that bears his name with a commitment to serving quality Creole cuisine. Arnaud believed, quite simply, that the pursuit of the pleasures of the table is as worthy as anything else one chooses to pursue in life.

Sixty years later, in 1978, Arnaud’s was acquired by Archie and Jane Casbarian, the second family of proprietors the restaurant has ever known. Casbarian sought to return Arnaud’s to the roots from which it had strayed by both restoring the property and reinvigorating the cuisine. In so doing, Casbarian brought world renown and widespread acclaim to Arnaud’s.

Presently, Arnaud’s Restaurant is being operated by a fourth generation of owners, Katy and Archie Casbarian along with their mother Jane. They, too, remain committed to carrying on the traditions originated by Arnaud Cazenave. More importantly, they are committed to staying true to the vision of their father as the restaurant nears one hundred years of operation.

Personally, I enjoy this drink best when made with brandy and half and half, and I cannot overstate the importance of using the best whole milk or half and half you can get your hands on! I personally prefer milk from Jersey cows.