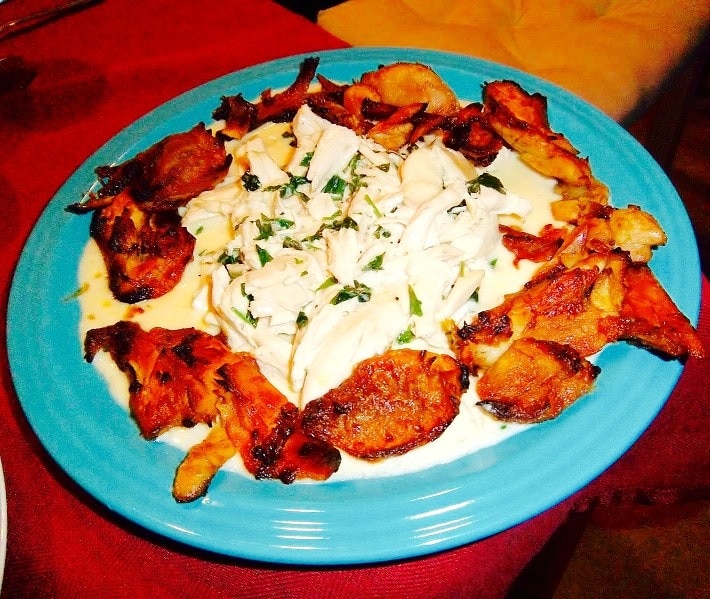 Citizens, this is quite possibly one of the best recipes ever for leftover Turkey – and it must, in TFD’s not so humble opinion – be DEVILLED!

This recipe is from Jane Grigson’s ‘English Food’ and is in TFD’s humble opinion one of the most delicious dishes of eighteenth century cooking, indeed one of the best of all English dishes, period! James Boswell described devilling during the 18th century, the time period from which this particular recipe originated.

As noted in the Oxford Companion to Food:

Devil – a culinary term which… first appeared as a noun in the 18th century, and then in the early 19th century as a verb meaning to cook something with fiery hot spices or condiments…The term was presumably adopted because of the connection between the devil and the excessive heat in Hell…

As further expounded on portablepress.com:

“Deviled” as a culinary term goes back to the 1700s, and it originally meant to cook something—anything—with lots and lots of hot and spicy condiments and seasonings. The most commonly used spices in this catchall preparation were mustard and cayenne pepper. (It’s first ever use in print refers to a “devil’d kidney,” which we’re sure was quite tasty.)

The meaning behind the term is pretty easy to ascertain: deviled, to devil, to hot and spicy, in going with the traditional representation of the devil as a horned demon that lives in fire. It’s a phenomenon that continues to this day, with cartoon devils appearing on the packaging of numerous hot sauces and other spicy foods.

Deviled foods of all stripe were eaten in the U.S. well into the 19th century, with some culinary historians going so far as to place the idea something like a westernized version of a curry. Deviled shrimp and seafood were especially popular.

Today, the term is most closely associated with just two foods: deviled eggs and deviled ham. While deviled eggs—egg yolks mixed with mayonnaise, mustard, and spices and placed back into a halved, hard boiled egg—aren’t particularly spicy, they do maintain the qualities that makes a food traditionally deviled: mustard and pepper. The paprika is technically a variety of chili pepper, and for extra devilish credentials, it’s red.

As for deviled ham, it was invented in 1868 by the Underwood Company, when a worker mixed ground ham with some slightly spicy seasonings, and then canned it.

The devilling mixture typically consists of Worcestershire sauce, mustard, butter, cayenne pepper, salt, and black pepper, although some recipes can also include curry powder. I would personally also enjoy this with some of my deviled shrimp.

As to the reason some Deviled items are spelled as ‘Devilled’ – it’s because of Anglo vs. American English!